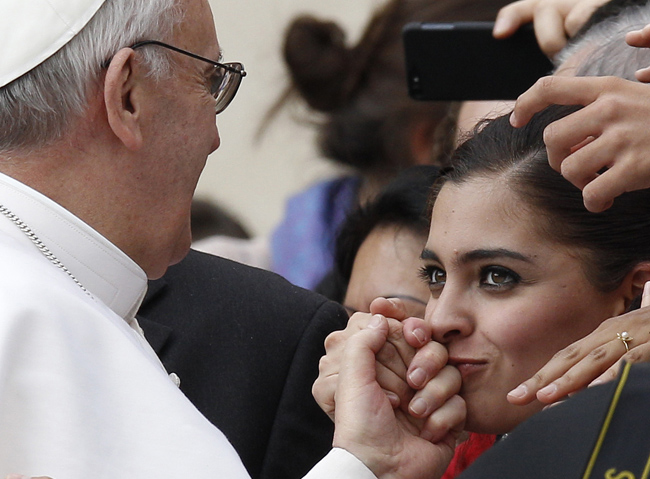 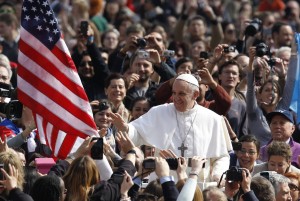 The U.S. flag is seen as Pope Francis greets the crowd during his arrival to lead his general audience in St. Peter’s Square at the Vatican March 27. (CNS photo/Paul Haring)

VATICAN CITY (CNS) — Holy Week is a time to follow Jesus out of one’s parish or group and out of one’s comfort zone to go with him in search of the lost sheep, Pope Francis said.

“There is such a great need to bring (people) the living presence of Jesus, who is merciful and rich in love,” the pope said March 27 at his weekly general audience in St. Peter’s Square.

The pope began very simply, saying in Italian: “Good morning. I’m happy to welcome you to my first general audience.”

After Easter, he said, he will return to the audience series Pope Benedict XVI began on the creed for the Year of Faith, but he wanted to continue the tradition of speaking about the Holy Week liturgies on the Wednesday before Easter.

Pope Francis said Holy Week “is not primarily about pain and death, but about love and the gift of self that gives life.”

Unlike his predecessors, Pope Francis did not read greetings in a variety of languages. Reportedly not comfortable speaking English, he chose to stick to Italian and allow aides to translate his remarks. The Argentine pope did not even speak Spanish during the audience.

Introducing the Triduum liturgies that commemorate the Last Supper, Jesus’ passion, death and resurrection, Pope Francis said Holy Week “is not primarily about pain and death, but about love and the gift of self that gives life.”

Holy Week is a call to follow Jesus more closely, he said, which means going with Jesus “to the margins of existence, making the first move toward our brothers and sisters, especially those who are farthest away, those who are forgotten, those who have the greatest need for understanding, consolation and help.”

Christians are called to be merciful as God is merciful, the pope said, reminding the crowd of the father in the story of the Prodigal Son: “Every day he goes out to see if his son has returned.”

The pope said those who want to follow Christ “cannot remain in the sheepfold with the 99 sheep; we must go out, seek the lost sheep with him.”

“Someone might say, ‘But Father, I don’t have time.’ ‘I have too many things to do.’ ‘It’s difficult,'” the pope said. “Often we settle for a little prayer, a distracted Sunday Mass or some gesture of charity, but we do not have the courage to go out to bring Christ to others.”

Pope Francis said he is pained when he sees “so many closed parishes,” churches locked except for Mass, and communities without a strong outreach to others.

However, he was very clear that following Jesus means bringing his merciful love to others, letting them know God is always ready to forgive and that Jesus died for them, too.

Jesus, he said, did not ask people if they were a Jew or a Gentile, if they were rich or poor, he simply asked them what they needed, he said.

Jesus “healed, consoled, understood, gave hope, brought everyone the presence of God who is interested in every man and every woman, like a good father and a good mother toward each of their children,” Pope Francis said.

The pope told the estimated 15,000 people gathered in St. Peter’s Square: “Always go out. And do so with the love and tenderness of God, with respect and patience, knowing that we use our hands, our feet, our hearts, but it is God who guides them and makes our actions bear fruit.”

The crowd included some 4,300 university students participating in an annual Holy Week pilgrimage sponsored by Opus Dei. At the end of the audience, he walked over to the section where many of them stood; his hands were grabbed and kissed and he was pulled into big hugs.

A short red-headed woman, pressed by the crowd against a barrier, fainted as the pope was about to reach her. Security agents lifted her over the barrier and carried her to a first aid station.

Before the audience, groups of young people chanted in Spanish, “We are the pope’s youth.” Like at Pope Francis’ first Angelus address, his inauguration Mass and his Palm Sunday Mass, many people held up homemade signs. One, written on a large pink heart, said, “Viva il papa” (Long live the pope). The woman handed it to the pope and he took it.

He rode through the crowd in the open popemobile, waving and giving groups a thumbs-up. He kissed several babies, although he only caressed the face of a little boy whose screams and kicks made it clear he wanted nothing to do with a security guard taking him from his mother to pass him to the man in white. 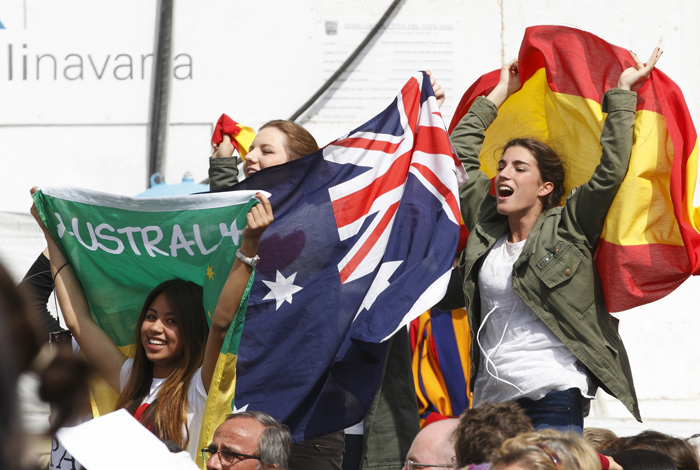 Young people hold the national flags of Australia and Spain as they cheer during Pope Francis’ general audience in St. Peter’s Square at the Vatican March 27. (CNS photo/Paul Haring)

NEXT: Self-absorption is root of evils within church, future pope said