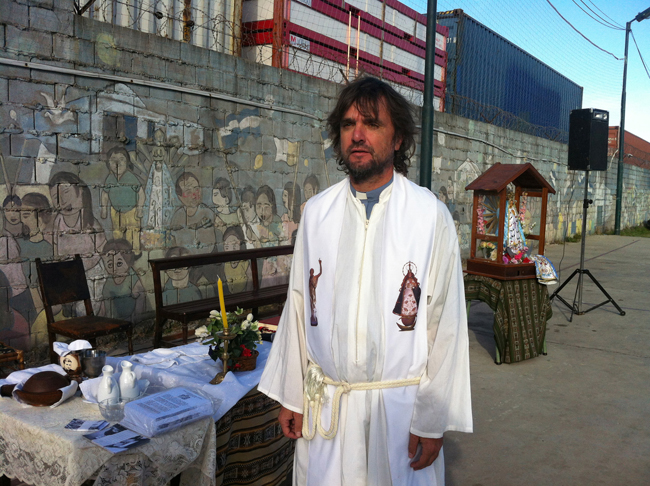 BUENOS AIRES, Argentina (CNS) — Mass at the Christ the Worker Parish is celebrated on a cement soccer pitch. There, parishioners sit on portable pews and relax on the embankment of a highway overpass; shipping containers soar over the fence behind the altar.

The service starts as the sun sets, with children and local youth beating drums and dancers dressed in blue and white costumes — similar to the national patroness, Our Lady of Lujan — circling the pitch.

The Mass unfolds like any other: readings, homily, consecration, handshakes and Communion.

The chapel near the soccer pitch is part church, part community center and serves Villa 31, one of the more than 500 shanties surrounding the Argentine capital, places where the authorities are often absent and drug dealing is rife. Christ the Worker Parish has six chapels in Villa 31 and adjacent areas.

It’s an example of the outreach to outcasts and the poor employed by Pope Francis during his 15 years as archbishop of Buenos Aires, where he wanted the church brought closer to the people and sent seminarians and priests to serve them.

“People can show you photos of him in their house,” he added. “Humble people can’t believe that he came to my ‘villa,’ my barrio, and now he’s pope.”

“The outskirts of Buenos Aires” — where many “villas de emergencia,” or shanties, are located — “were the center for him, not the downtown,” said Father Jose Maria di Paola, or, “Padre Pepe,” perhaps the best-known of the priests who live and work in the villas.

“The orientation of the archdiocese has been directed toward the most needy,” Father di Paola said, adding that the church at times has provided more social assistance in the villas than the state has provided.

The villas were such a priority for Pope Francis that he established chapels and missions, providing education, serving hot meals and organizing youth groups and drug rehabilitation programs.

He also denounced drug use, drug decriminalization and drug dealing — especially paco, a form of crack cocaine processed with sulfuric acid and kerosene and sold in the villas. In 2009, the pope’s denouncements forced Father di Paola, 50, to temporarily leave the villas after he received death threats.

None of that slowed down the mission work, which Father di Paola suspected has been successful because priests actually live and work in the villas and become part of the community. Their numbers grew under Pope Francis, going from “eight or nine” priests to more than 20, he said.

“This has stopped evangelicals” from moving in, added Father di Paolo, 50, who looks like a man in his late 30s with his shaggy hair, thin beard and black tennis shoes.

It also gives a sense of community to those originally from other places: Father di Paolo said priests often incorporate customs that Catholics bring from the neighboring countries into their celebrations.

Pope Francis frequently visited the villas, places polite society members, and some taxi drivers, avoid. He arrived on the bus or collective transport, walked the rutted roads and baptized and confirmed the children of the residents — many of whom worked as bricklayers and maids or came from countries such as Bolivia, Peru and Paraguay in search of better economic opportunities.

“He used to come to the villas, sip mate (a kind of herbal tea) and visit with the people,” Father di Paola said.

“People can show you photos of him in their house,” he added. “Humble people can’t believe that he came to my ‘villa,’ my barrio, and now he’s pope.”

Maria Laura, 20, said, “It’s pretty strange to say that I was confirmed by the pope.”

She participates with a youth group at Christ the Worker and said her group tried to help “a lot of kids getting into drugs.”

The youth groups also provide a path for young men to enter the seminary, although many seminarians and priests not from the villas are sent to serve them.

Father Martin Carrozza, 36, grew up near the archdiocesan seminary, but was asked by Pope Francis to serve the villas.

“He said, ‘If you don’t like it, I (will) remove you from them,” recalled Father Carrozza, vicar at Christ the Worker.

Father Carrozza said he would not consider leaving the community, explaining: “The people made me feel at home. They really opened their hearts.”

With his former archbishop now in the Vatican, Father di Paolo expects pastors like him to be a priority in the papacy of Pope Francis.

“Any priest working with the poor will have a pastor close by,” he said.