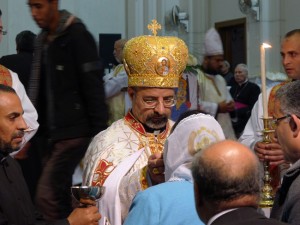 Coptic Catholic Patriarch Ibrahim Isaac Sedrak distributes Communion March 18 during the liturgy for his enthronement, or installation, at the Coptic Catholic Cathedral of the Blessed Virgin in Cairo. Patriarch Sedrak said addressing his community’s hardships and trying to dissuade Christians from leaving their homeland will remain among his most difficult challenges. (CNS photo/James Martone)

CAIRO (CNS) — Coptic Catholic Patriarch Ibrahim Isaac Sedrak said rising social and economic troubles since the revolution are leading to the despair and emigration of the country’s Christians and Muslims alike, and that his church must work across sectarian lines to restore “lost confidence” in the predominantly Muslim North African nation.

“Our challenge is that we reclaim our Egyptian identity and our concern for all Egyptians and for our culture. We have lost confidence in ourselves. We had transitioned and were ready to start anew and build and progress, but nothing has happened, and this is the (the church’s) challenge: that people here can again have a good life, on the human level, and economic level,” Patriarch Sedrak said.

Since the January 2011 revolution that led to the fall of Egyptian President Hosni Mubarak, insecurities and violence in Egypt have scared off the country’s foreign investors and tourism, which previously generated major sources of national income and jobs.

First attempts at democratic elections have seen the rise to power of a conservative Islamic government, which opposition forces are disputing. Demonstrations and strikes in the country are increasingly violent and often fatal.

All of this has resulted in what Patriarch Sedrak said was a general state of chaos and “lack of clarity” in Egypt, leading many of its citizens, including thousands of Christians, to seek security abroad.

The patriarch spoke to Catholic News Service from his residence in Cairo March 14, two days after his enthronement ceremony, where he officially replaced the former Coptic Catholic patriarch, Cardinal Antonius Naguib, who stepped down earlier this year due to illness.

“Our children are emigrating out of Egypt, and it is no longer emigration in search of work. It is emigration in search of security, and out of fear,” said Sedrak, adding that, as former bishop in the southern Egyptian governorate of Minya, Catholics had been coming to him in growing numbers over the last two years, expressing concern for the future of their families.

Addressing such hardships and trying to dissuade Christians from leaving the homeland will remain among the Coptic Catholic Church’s most difficult challenges, he said.

“People come and they can’t even meet the most basic needs of their children, such as food and shelter, and the church is expected to solve this problem, and that is extremely difficult. All I can do is to tell them we are here in our country, we have a message. Yes we have difficulties here, but there are difficulties outside too,” he said.

“But in the end, they are the ones suffering,” he continued, “and they tell me ‘Your words are very beautiful, Patriarch, but I am not traveling for myself. I am doing it for my children and their future.'”

Patriarch Sedrak, 57, said that Christians “could be having more difficulties now,” than before the revolution, but stopped short of calling it persecution, as some church leaders have done.

“There is no clarity in the country … and theft and thugs have increased, there is no order, and no one is punished for wrongdoings, so what is happening is people are doing whatever they want,” Sedrak said, lamenting what he called “a kind of chaos in the country.”

He said a possible way out of this — or at least of keeping things from getting worse — would be increased efforts on the part of both Christians and Muslims to unite in projects that benefit everyone, such as those he witnessed for 10 years as bishop.

“I am thankful to God for my time in the South; I saw the church there working with those with special needs and the marginalized, Muslims and Christians. It is beautiful, very beautiful. You didn’t feel the difference. You felt the religion is in your personal life, but you didn’t sit around talking about it all the time,” Patriarch Sedrak said.

He said he was lucky to be taking over at a time of unprecedented overtures between Egypt’s historically rival Coptic Catholic and Coptic Orthodox Churches, and that he and his church were happy that such a large number of Orthodox Christians were in attendance at his enthronement, including Coptic Orthodox Pope Tawadros II, who made an appearance toward the start of the four-hour event held March 12 at Cairo’s Coptic Catholic Cathedral of the Blessed Virgin.

“People are thirsty for a symbol or sign of true love, they are fatigued and fed up with distance and struggle,” he said, adding that he hoped to see activities and dialogue uniting youth from Egypt’s Catholic, Orthodox and Muslim communities.

No official count is available for the number of Coptic Catholics in Egypt, but they are thought to make up anywhere from 200,000 to 250,000 compared to an estimated 10 million to 15 million Coptic Orthodox. The vast majority of Egypt’s estimated 80 million people are Sunni Muslims.

NEXT: Muslim leaders express hopes for improved relations with Catholics