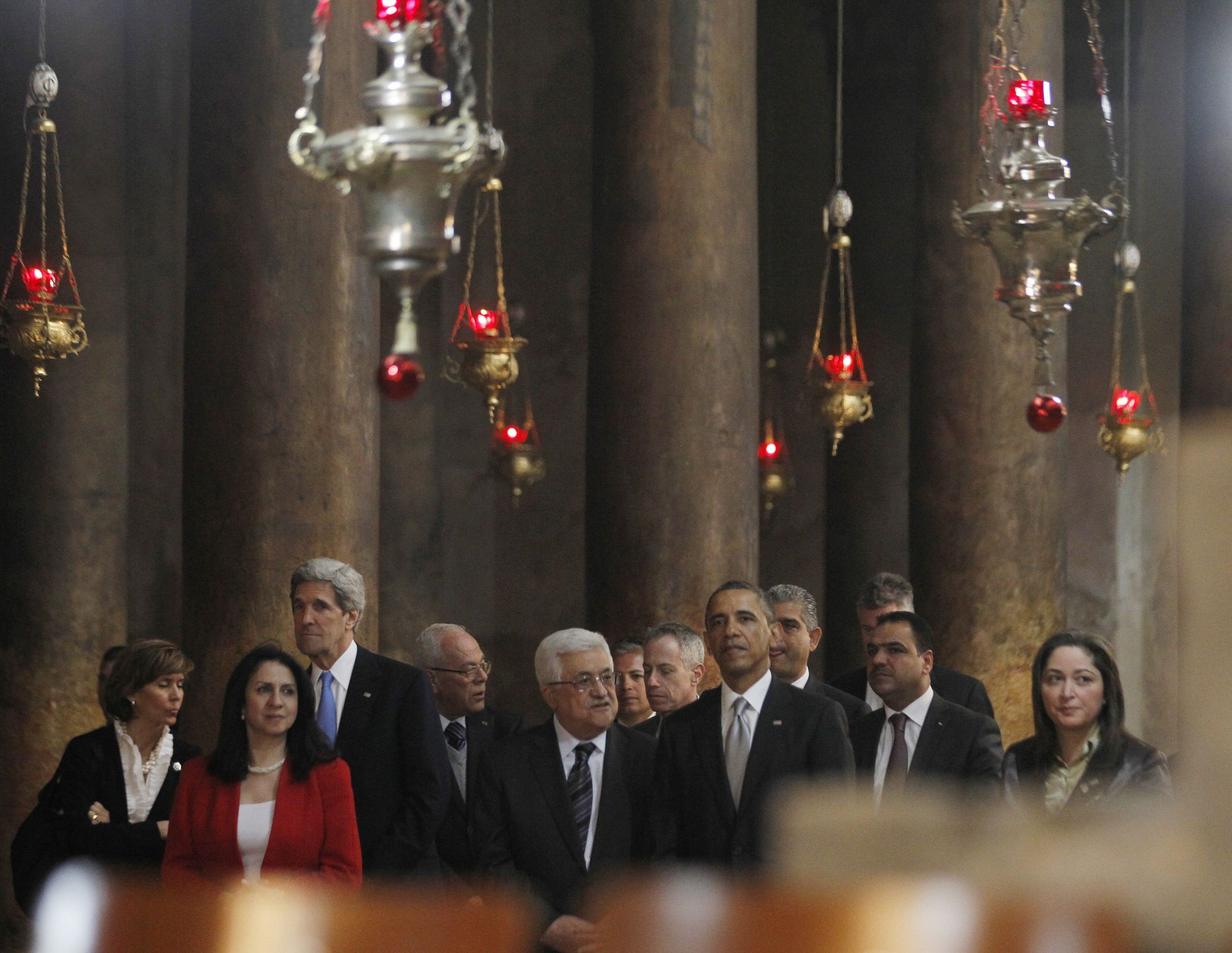 U.S. President Barack Obama, visiting the West Bank city of Bethlehem, stopped twice to light candles for his family and himself: first at the Church of Nativity grotto, where Christian tradition holds that Jesus was born, then at the adjacent Catholic Church of St. Catherine.

On the last leg of his four-day visit to Israel and the Palestinian territories, Obama also took time for a few moments of private prayer and contemplation, said Greek Orthodox Patriarch Theophilos III, who was the first to greet the American leader inside the church, welcoming him as “a messenger of peace and reconciliation.”

Obama was then greeted by religious leaders according to the Status Quo protocol that governs holy sites: the custos of the Holy Land, Franciscan Father Pierbattista Pizzaballa, followed by Armenian Orthodox Archbishop Sevan Gharibian. Muslim religious leaders and Palestinian leaders also greeted Obama, who was accompanied by Palestinian President Mahmoud Abbas throughout the visit.

Father Pizzaballa, who explained to the president about the Catholic community in the Holy Land, described the president as “very friendly, very simple and not difficult to talk to.”

Obama “said he felt the situation was very complicated but that he will do his best to help the people here and also to help the Christian presence,” said Father Pizzaballa.

Patriarch Theophilos described the visit as a “pilgrimage.”

“He was very happy to be at the church and appreciated the fact that this is a special holy place and important for the whole of mankind,” the patriarch told CNS.

Despite a 45-minute delay in the visit due to an originally unscheduled private meeting with Israeli Prime Minister Benjamin Netanyahu in the president’s Jerusalem hotel, the Greek Orthodox patriarch said the 40-minute church visit “went smoothly and according to the program.”

Obama had been scheduled to arrive in Bethlehem by helicopter, but high winds blew desert sand and caused almost zero visibility in the area, so he arrived by motorcade.

Earlier in the day, Obama visited the Mount Herzl National Cemetery, where he placed a wreath at the tomb of the father of Zionism, Theodor Herzl and, according to pool reports, placed a stone from the grave of Martin Luther King Jr. on the tomb of slain Israeli Prime Minister Yitzhak Rabin who was killed by a Jewish extremist in 1995 for his efforts to make peace with the Palestinians.

Once again reassuring Israelis that America stands with them, Obama spent an hour at the Yad Vashem Holocaust Memorial, visiting the Children’s Memorial, where the names and ages of 1.5 million Jewish youngsters are intoned in darkness relieved only by pinpricks of light; the Hall of Names, where the details of 4.2 million Holocaust victims are recorded; and the Museum of Holocaust Art.

In the dim Hall of Remembrance, Obama, wearing a white yarmulke, stepped forward to rekindle the Eternal Flame and laid a wreath on a stone crypt containing the ashes of Holocaust victims, crouching close to the stone for a moment’s contemplation.

In his remarks after the ceremony, Obama said Yad Vashem was a testament to man’s capacity for good as well as evil, citing “the rescuers, the righteous among nations, who refused to be bystanders.”

He called the memorial “a source of hope. For we are never powerless. In our lives we always have choices — to succumb to our worst instincts or to summon the better angels of our nature; to be indifferent to suffering, wherever it may be, whoever it may be visited upon, or to display empathy that is at the core of our humanity. We have the choice to acquiesce to evil or make real our solemn vow of never again.”

On March 21, Obama met with Palestinian leaders in Ramallah and spoke with young Palestinian students who presented their science experiments to the president. Later in the day, Obama told several thousand select Israeli university students that the young Palestinian women he had met were not “much different than my daughters, or your daughters or sons.”

Urging the Israeli young people to push their leaders to take courageous steps toward peace because it “was the strongest nation in the region with the support of the strongest country in the world,” the president said he believed that if Israeli parents were to meet the Palestinian students they would honestly want them to succeed. Despite a lone heckler, Obama received several standing ovations for what the Israeli media said Israeli politicians were too afraid to say: two states for two nations.

“Sometimes the biggest miracle is to recognize that the world can change,” said Obama.