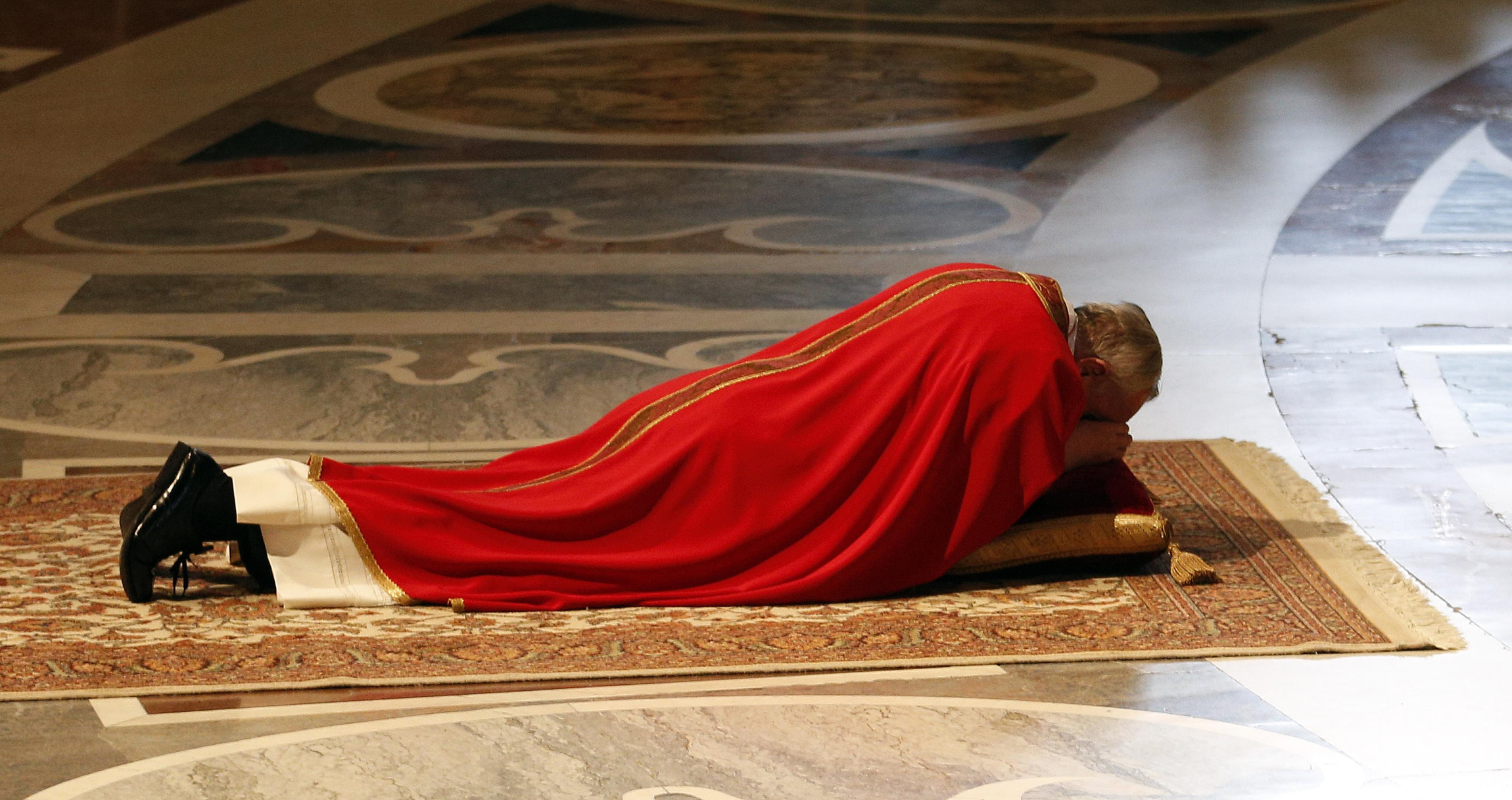 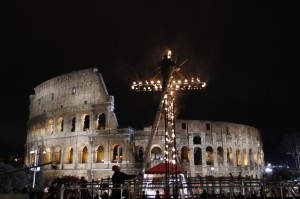 A worker lights torches on a cross outside Rome’s ancient Colosseum before Pope Francis leads his first Good Friday Way of the Cross as pope March 29. (CNS photo/Paul Haring)

VATICAN CITY (CNS) — Lying prostrate on the floor before the main altar of St. Peter’s Basilica, Pope Francis celebrated the Liturgy of the Lord’s Passion.

The pope presided at the service March 29 to commemorate Christ’s death on the cross.

He began the rite after a silent procession down the central nave under dim lighting, which underlined the solemnity of the ceremony. Then he rested his forehead on a red pillow while lying face down in front of the altar in silent prayer, in a sign of adoration and penance.

After the homily, during the adoration of the cross, the pope removed his red chasuble and, in a sign of penance, placed a red stole over his shoulders, bowed three times and kissed the cross.

Following tradition, the homily was delivered by the preacher of the papal household, Capuchin Father Raniero Cantalamessa.

At the liturgy in St. Peter’s Basilica, the pope and thousands of faithful stood as three deacons and the Sistine Chapel Choir chanted the account of the Passion from the Gospel of St. John.

In his homily, Father Cantalamessa said the church must have the courage to return to the simplicity of its origins and rid itself of all “impediments” that block the Gospel message from reaching the world.

“We know what the impediments are that can restrain the messenger: dividing walls, starting with those that separate the various Christian churches from one another, the excess of bureaucracy, the remains of ceremonials, bygone laws and disputes, which, by now, have become only debris,” he told the pope.

Referring to Pope Francis’ words to the College of Cardinals before the recent conclave, Father Cantalamessa agreed that sometimes Jesus is knocking not just to get into a person’s life, but also to get out into the world and reach others.

He compared some events in the church to what happens to old buildings over the centuries, as they “become filled with partitions, staircases, rooms and closets,” the papal preacher said.

“The time comes when we must realize that all these adjustments no longer meet current needs, but rather are an obstacle, so we must have the courage to knock them down and return the building to the simplicity and coherence of its origins,” he said.

It’s the same mission St. Francis of Assisi received when he heard, “Go, Francis and repair my church,” the Capuchin said.

He said St. Paul also wondered who could be up to “the superhuman task of being ‘the aroma of Christ’ in the world.”

Father Cantalamessa said St. Paul provides the answer in his Second Letter to the Corinthians, when he says the ability to speak in Christ comes from God, “who has indeed qualified us as ministers of a new covenant, not of letter but of spirit; for the letter brings death, but the Spirit gives life.”

The preacher said, “We must do everything possible so that the church may never look like that complicated and cluttered castle” described by Franz Kafka in “An Imperial Message,” in which it becomes hugely difficult for the messenger — charged with relaying a dying king’s message — to make it out of the castle and reach his destination with the original communication.

The Gospel message, like the king’s message in Kafka, was meant to and needs to get out into the world “as free and joyous” as when it was first pronounced, he said.

“May the Holy Spirit, in this moment in which a new time is opening for the church, full of hope, reawaken in people who are at the window anticipation for the message, and in the messengers the will to make it reach the people, even at the cost of their lives,” he said.

Because Christ’s message is one of love and mercy, evangelization “is not a conquest, not propaganda; it is the gift of God to the world in his son Jesus,” Father Cantalamessa said.

PREVIOUS: Pope washes feet of 12 young detainees to serve them ‘from the heart’

NEXT: In efforts to sell church, Berlin Archdiocese uses eBay