Hundreds of priests in the Archdiocese of Philadelphia sing a hymn during communion at the Chrism Mass on Holy Thursday, March 28, at the Cathedral Basilica of SS. Peter and Paul, Philadelphia. (Photos by Sarah Webb) 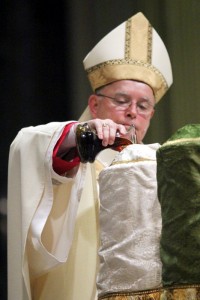 Archbishop Charles Chaput blesses the Oil of the Sick and the Oil of Catechumens at the Chrism Mass March 28.

As always this year’s Holy Thursday Chrism Mass, when the Oil of the Sick and the Oil of Catechumens are blessed and the Chrism is consecrated, was one of the highest attended ceremonies in the Cathedral Basilica of SS. Peter and Paul of the year.

In fact, it represented the highest number of priests the Cathedral will see in the year, because after the Mass they receive the sacred oils to take back to their parishes for use during the coming year.

“I thank each of you for being here today, but most of all I thank you for being priests in the church and school and other places where the Gospel is proclaimed in the Archdiocese,” Archbishop Charles Chaput told the assembled clergy.

His statement was followed by enthusiastic applause from the laity in the congregation, after which the Archbishop said, “The people of the Archdiocese love you as is obvious from their applause and so do I.”

On the whole, it was anything but an “aren’t we special” homily.

“Pope Francis has spoken a great deal about the Church in these early days of his papacy,” the Archbishop said, and he has warned us more than one time of the danger of the Church becoming a worldly Church, which he means is a Church  that is self-focused, concerned about itself, about its problem, about its image of itself.

To use his words, he said when the Church does not come out from itself and evangelize, it becomes self-referential and sick.

The Archbishop said he thought about Philadelphia when he heard these words of Pope Francis.

“The Church of Philadelphia with the many problems of the past few years has a danger of becoming a self-referencing Church,” he said. “Perhaps even in the days when the Church was stronger we sensed ourselves as being powerful. There is a danger in that we become a self-referential Church.

“Perhaps the humiliation that we have experienced in the last several years has been in some way God calling us out of that worldly Church to be a humbler Church and be once again an evangelizing Church,” he said.

He warned against being self-satisfied with buildings and projects and the way things always were, “instead of being missionaries and evangelists of the Good News of Jesus Christ.”

Speaking to the priests, Archbishop Chaput reminded them of the early fervor and generosity they had when first ordained, and urged them to recommit to that zeal today.

There are corners of the archdiocese where the flame that the Archbishop was referring to appears to live, for example at the very young St. Rocco Parish in Avondale, Chester County, from where Msgr. Francis Depman led three busloads of Hispanic boys and girls preparing for confirmation, as well of the sisters who teach them.

“They are great kids, full of enthusiasm, full of faith,” Msgr. Depman said, noting the parish has already seen 10 girls enter the convent, one young man ordained and another in first theology studying for the priesthood.

“I’m not sure anyone here is thinking of the priesthood,” commented one of the students, Brandon Torres, “but it would be good if we had more priests. I loved the Mass and the cathedral is very beautiful. I never expected it to be so pretty.”

A fair number of the priests attending the Chrism Mass were not archdiocesan clergy, but representatives of the different congregations who work in Philadelphia.

For example, Father Donald Miniscalco, a Redemptorist, has probably attended the Mass more often than most.

“It’s a wonderful Mass, it shows the unity of the whole priesthood,” he said. “I’ve been here (in the Archdiocese) for 33 years in the same room at St. Peter the Apostle (Parish in Philadelphia), mostly on the road giving retreats.” 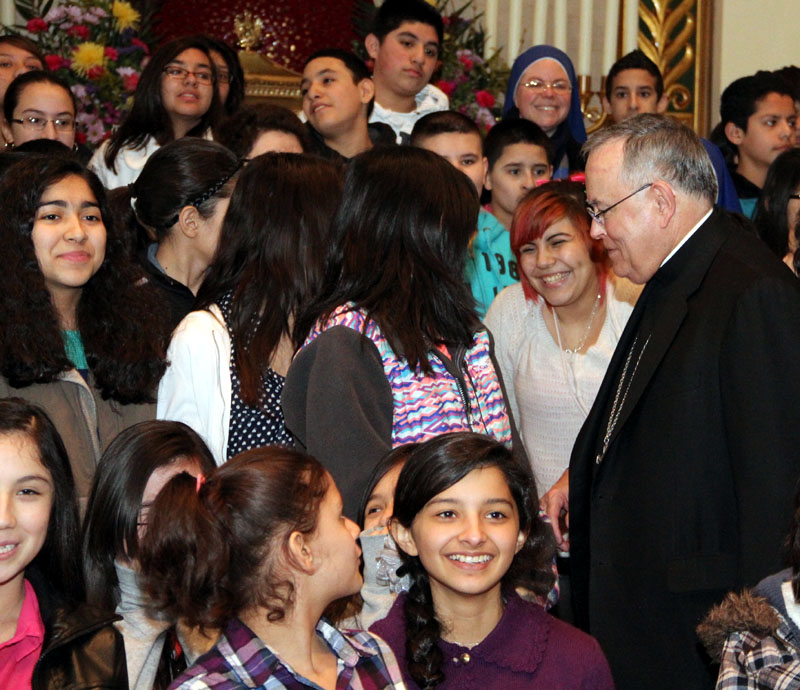 After the Chrism Mass Archbishop Chaput greets many of the young people present for the Mass, including three busloads of Latino Catholics from St. Rocco Parish, Avondale.

NEXT: Students want to ease global poverty; Villanova conference shows them how