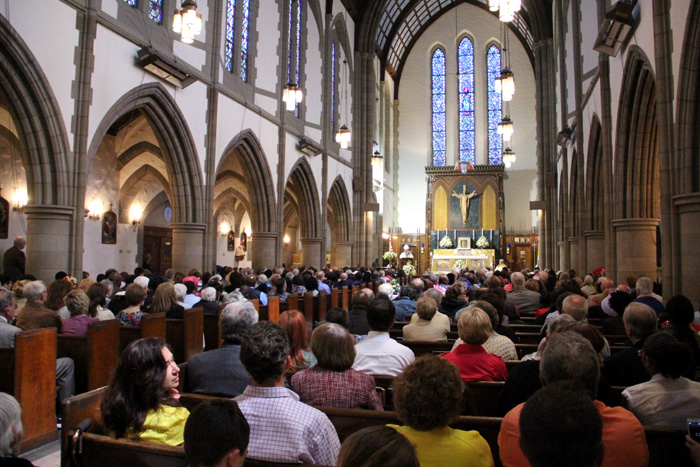 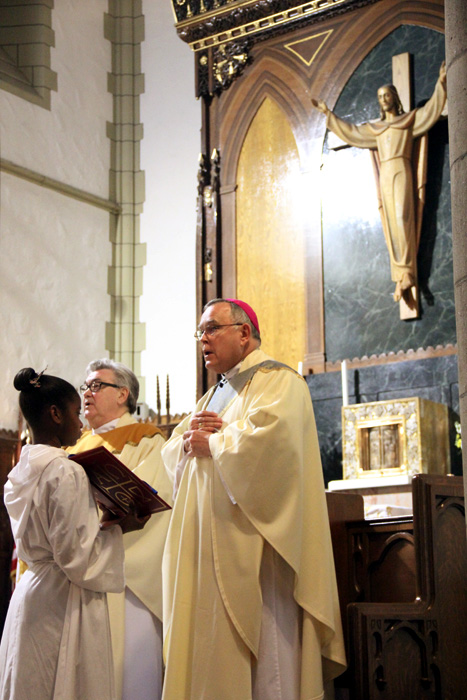 Every parish has distinctive features. Blessed Virgin Mary, Darby, where Archbishop Charles Chaput celebrated a 100th anniversary Mass on Sunday, April 14, is diverse — it always was and probably always will be.

The nicest thing about it, all the people pretty much get along with one another, they always have and probably always will.

Father William A. FitzGerald was appointed pastor when the parish was founded and he hit the ground running. His first Mass was celebrated at the Darby Movie Theater April 17, 1913 for a congregation of 175 families. The next year a chapel and parish hall were built and according to the records 2,000 people showed up for Father FitzGerald’s first Mass there on Aug. 16, 1914.

Just three years later he was able to open a school in the former Bunting mansion initially with 195 students, and just as today both Catholic and non-Catholic. Teachers were six Sisters, Servants of the Immaculate Heart of Mary, led by Mother Marietta, and the Immaculate Hearts Sisters conduct the school to this day. Father FitzGerald was still pastor in 1930, when the present church opened, but by that time he had a bit of help.

Father Vincent Gallagher arrived in August 1920 and the circumstances were a bit unique.

First of all, he was ordained by himself on August 1, by Cardinal Dennis Dougherty and immediately sent to BVM. Most unusual, he was Darby born and bred, and young priests at that time were never assigned to their home turf. Almost invariably they were sent up to what is now the Allentown Diocese for seasoning. Time went by and when Father FitzGerald became ill, Father Gallagher was appointed administrator. In 1934, when Father FitzGerald died, he was named pastor, and there he remained so until his 1971 retirement. After that he lived at Villa St. Joseph, Darby until his death. His entire life, except for seminary days, was spent in the community and parish he loved. Since then the parish has been led by Father James J. Grogan, Father Edward Conway, Msgr. Francis X. Schmidt, Father Peter Foley, and since 1998 Father Joseph M. Corley.

Helen (D’Alanzo) Keichline moved into Darby 52 years ago and she and her late husband raised four children in the parish and school. “It was a good school,” she said. “I ran a lot of socials and I still volunteer as a cook.” Her cooking specialty is the Italian foods of her birth heritage. She remembers the Catholic War Veterans’ parades, the appreciation dinners run for the local police, and the many other events that contribute to a successful parish.

“Father Corley has done a lot,” she said. “We had a lot of people move and others come in, Father says we have to keep moving. It is a mixed neighborhood but we have never had a problem.”

Alma Bailey, who is African American, moved into the parish in 1981. She was heartbroken when her former parish, Our Lady of Victory closed, but now she is right at home at BVM.

BVM, she said, “is a thriving parish, very integrated and very welcoming, and it makes you want to go to church.”

She recalls when Father Corley arrived there was a parish debt because of an unforeseen expense.

Father Corley suggested if 200 people would each agree to give $500, the debt would be wiped out, and it was. Bailey enlisted six of her friends to go along with the plan. “Father Corley will find something for you to do if you are just sitting there,” she said.

Ann Tripp, 95, who has been in BVM for more than 50 years was one of the first African Americans to join the parish, had six children graduated from the school when there were typically 60 or 70 kids in a class., and it was a good education. “When one of my daughters went to college they asked her what private school she had gone to,” Tripp said. “When one of my of my girls graduated from Prendie she was one of only two black girls in the class. She carried the flag at the convention center graduation.

“I remember Father Gallagher, he came to my home many times; he was a good priest. I remember Msgr. Schmidt he started our Oktoberfest. I remember the carnivals, Sally Starr came to one.”

BVM school, which peaked at about 1,100 students has 223 these days, but is still led by Immaculate Heart Sisters, including the principal, Sister Virginia Paschall. “I’m in my 12th year here and it’s great to have that stability,” she said “We are very diverse, with children from many counties, and most are not Catholic. BVM has strong community spirit and when you have those great things happen. We’ve added Spanish pre-K through eighth and we even have Latin. We have a good team of teachers, staff and home and school.”

When Father Corley arrived in 1998, he did have one tenuous connection with the parish. Msgr. Francis X. Schmidt, his predecessor once-removed, had been his freshman high school basketball coach and the first to put the priesthood into his head. He didn’t just ask him if he wanted to be a priest, he told him he should become a priest.

“I’m happy here, with 15 years as pastor and weekend ministry before that,” he said. “I find joy in a parish that was built by immigrants from Europe that now welcomes immigrants from Africa and other parts of the world. With 940 families we often call ourselves the United Nations of Darby.”

The school continues to get by partly because of outside donations that since 2004 have provided more than $290,000 in tuition assistance. The parish, which has always enjoyed excellent relations with nearby Fitzgerald Mercy Hospital, has the services of Mercy Sister Mary Elizabeth Burke as parish nurse, who has helped people transition from homes to nursing homes among other things. The parish has a huge St. Vincent de Paul Program that distributes food to about 750 people. The former convent has been repurposed since 1994 to Mother’s Home, a well-respected residential program for pregnant mothers and their children. The parish also works to assist immigrants find apartments and employment. “Bonds of Love” is a program to support those who have suffered bereavement.

At the other end of the age spectrum unique program Father Corley takes pride in the parish Boys to Men Program that targets seventh and eighth graders and brings in men of faith from different occupations to tell their faith stories. All in all, BVM is well positioned to continue to spread the Good News in its second century.