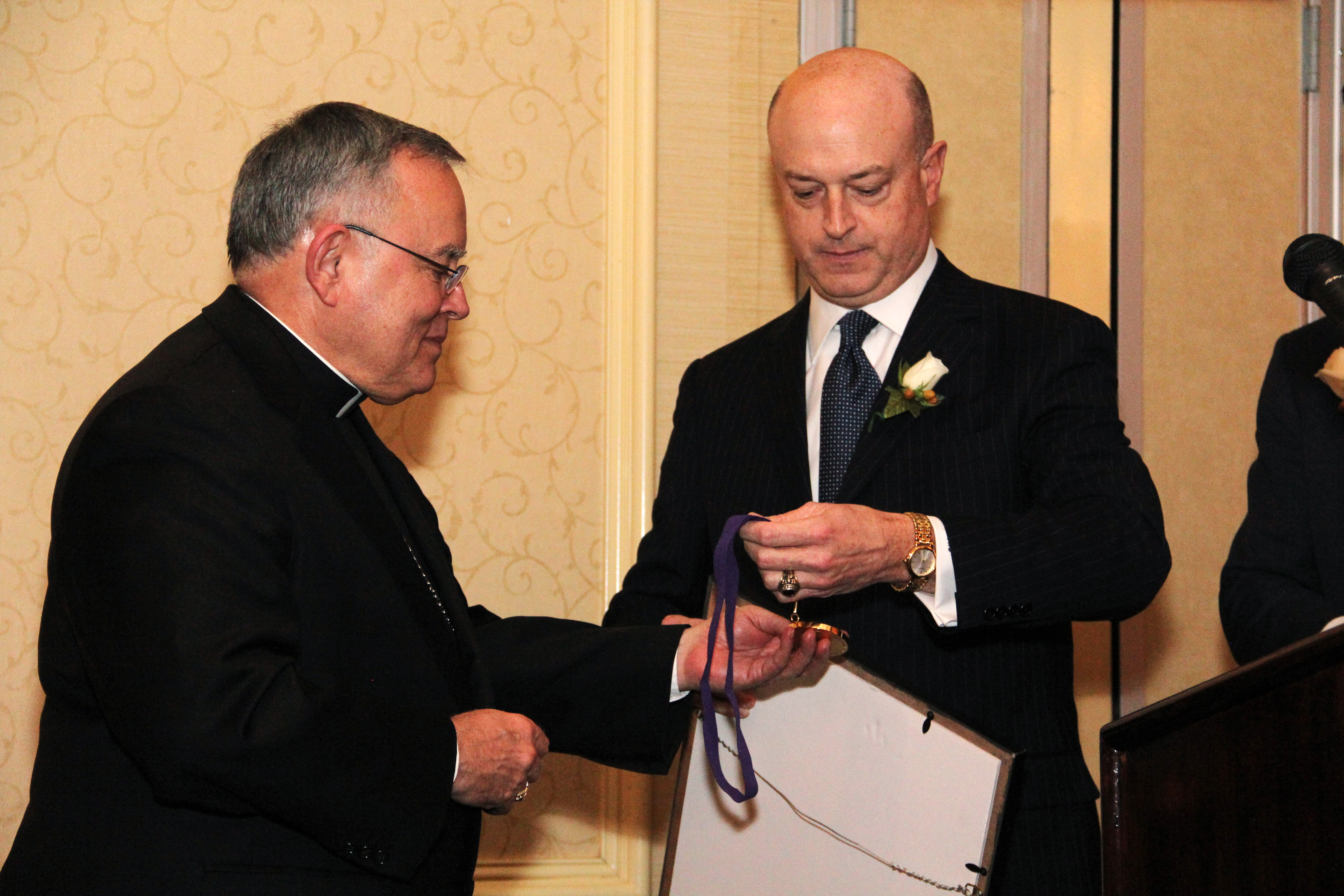 All were recipients of the Sourin Award, given annually since 1960 by Philadelphia’s Catholic Philopatrian Literary Institute — popularly known as the Philo — and Archbishop Chaput was this year’s honoree.

He accepted the 2013 award from Philo President Thomas B. Byrnes at a dinner before 200 guests held at the Hilton Philadelphia City Avenue.

In his acceptance speech it became clear that if you ask Archbishop Chaput a question he is not apt to sugar-coat the answer. Although he is happy to be Philadelphia’s Archbishop, he said his answer as to how he has enjoyed the past 19 months is, “I haven’t liked it at all.”

“I spend all of my time trying to figure out how we are going to do the next thing,” he said. “I ask your patience.”

Quite honestly, “It has been an awful time,” he said. “We’ve had huge problems with the clergy which has been a great sadness to the Church, a great sadness for the priests and a great sadness for all of you here. I have had to make decisions about the future of their lives that have been extraordinarily difficult not only for them but for their families; their moms, their brothers and sisters.”

Coupled with this, he said, “I have had to close about 50 schools and will be closing parishes in the next couple of years in a way that will be disappointing to a lot of people. We have financial problems that are unimaginable.”

The Philadelphia archdiocese does have a distinguished history and Archbishop Chaput listed some of its past accomplishments, for example the home of two saints, an honor shared in America only by Hawaii. It had the largest Catholic school system in the country. It is home to a large number of Catholic colleges and universities. It still had more parishes (until recently) than Los Angeles, which is more than three times as large in Catholic population.

“This is an extraordinary place,” Archbishop Chaput said. “But things have changed immensely.”

He pointed to the practice of faith, with Mass attendance hovering around 20 percent when it once was about 75 or 80 percent. The church and schools were built on the assumption that the high numbers would always be there.

“Things have changed,” he said. “The problems we have financially are not admitting we have to change. Not in terms of our values and enthusiasm but in terms of how we look at our structures. We can’t keep open parishes that are empty; we can’t keep schools that have only 80 kids in them, we just can’t.”

Change, he said, is going to be awkward and difficult, but “if we are going to be the Church that Jesus Christ wants us to be, we have to be different.”

The Archbishop reminded his audience that the early Church as established by Jesus had no buildings. The first Christians continued to worship at the Temple and synagogues until they were expelled and then the churches they built were very small. The Church, he said, “is not a building it is the people of God, all of us together.”

Dealing with all of these problems that have built up over the years is a distraction. “I spend all of my time trying to figure out how we are going to do the next thing,” he said. “I ask your patience.”

As an archdiocese, “we have a lot of work to do,” he said. “I hope that when I turn 75 and the Pope says it is time to retire and get out of here you will have a reason to give me an award. You don’t have any yet. But we will do it together because I know you love the Lord and love His Church. Let’s do it together.”

Judging from the applause, it was apparent that the Philos have full confidence that Archbishop Chaput, in these last 19 months, has already earned that award and will continue to do so.

The Philo itself was begun in 1850 by Father Edward Sourin, who was at the time pastor of St. John the Evangelist Church and vicar general of the Diocese of Philadelphia.

Its initial purpose was to provide some education to young mostly Irish immigrants, but eventually it evolved into Philadelphia’s elite Catholic lay organization. But it has never forgotten its roots in education, which today takes the form of a scholarship program.

For more information, visit the website of the Catholic Philopatrian Literary Institute.