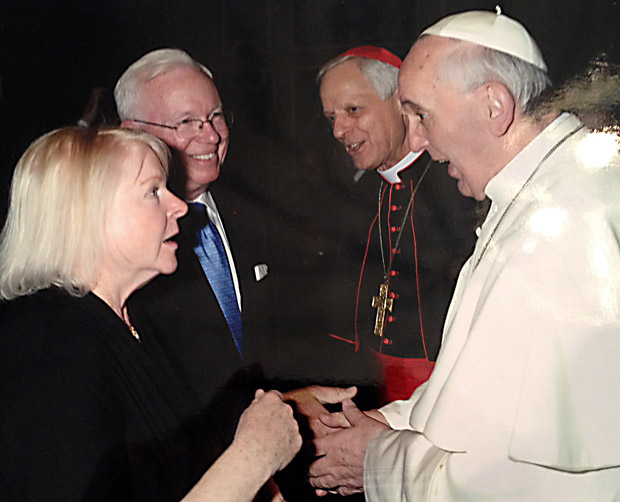 Ann and James Longon from the Philadelphia Archdiocese meet Pope Francis as part of a visit by the Papal Foundation, whose chairman, Washington Cardinal Donald Wuerl, is shown at center. The foundation is based in Bala Cynwyd.

When 120 officials, donors and their family members from around the United States signed on for the Bala Cynwyd-based Papal Foundation’s annual pilgrimage to Rome to present the Holy Father with this year’s grant they had no idea they would be meeting a brand-new pope.

At the April 11 meeting in the Vatican’s Clementine Hall when the $8.6 million grant was presented, Pope Francis personally greeted each of the pilgrims instead of reading his prepared statement.

In the statement Pope Francis said in part, “In the twenty-five years that have passed since the Foundation was established, you and your associates have helped the Successor to St. Peter by supporting a number of apostolates and charities especially close to his heart. In these later years, you have contributed significantly to the growth of local churches in developing countries by supporting, among other things, the continuing formation of their clergy and religious, the provision of shelter, medical assistance and care to the poor and needy, and the creation of much-needed educational and employment opportunities.

“For all of this, I am deeply grateful. The needs of God’s people throughout the world are great, and your efforts to advance the Church’s mission are helping to fight the many forms of material and spiritual poverty present in our human family, and to contribute to the growth of fraternity and peace.” 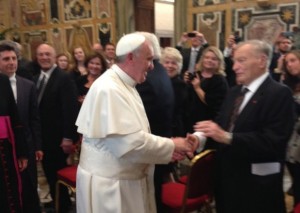 Rocco Martino, a businessman from Villanova, greets Pope Francis April 11 while presenting a grant from the Papal Foundation.

“It was a spectacular visit with our Holy Father Francis,” commented Barbara Henkels, who along with her late husband, Paul, has been a long-time contributor to the Foundation. “He graciously received each of us individually. Even though I was the last to go up he was still giving his radiant presence to bless our family picture and the picture from all of the students of Regina Academies and receive their letters for him. His countenance is like looking at the face of Jesus: gentle, radiant and ever so compassionate.”

James Longon, a Steward of St. John Neumann, said the pope “does not have peripheral vision. When he met me he didn’t see anyone else in the room, no cardinals, no aides, no other Stewards. He just looked right into my eyes and shook my hand.”

“Pope Francis is a man of determination and decision,” said Rocco Martino. “His eyes shone with intelligence and good humor. His handshake was firm and friendly. I felt a sense of confidence, and that I had known him for years. The Holy Spirit was certainly present at the conclave.”

The Papal Foundation was founded in 1988 by the late Cardinal John Krol, immediately after his retirement as the Archbishop of Philadelphia. The purpose was to provide an additional source of income for the Holy See and to strengthen the Holy Father’s ability to fulfill the mission of St. Peter.

The funds donated to the foundation go to a permanent endowment. The principal is never touched, and the annual donation represents income earned. Because of this the corpus continues to grow through new donations, and depending on market conditions, the annual earning to be passed on to the Holy Father also grows exponentially.

At this time the assets of the trust exceed $169 million and to date $85 million has been contributed to causes of the Holy See. Recent donations have included, among many, rebuilding church property in Estonia, construction of a parish center in Kazakhstan, education and nutrition for orphaned and abandoned children in Ethiopia, and scholarships for clergy and laity from poor countries to study in Rome.

The Board of Trustees consists of all American cardinals ex officio and 20 other trustees drawn from the hierarchy and laity, including Philadelphia area trustees Bud Hansen, James Longon, Timothy Maguire, Eustace Mita, James Nolen III and J. Eustace Wolfington.