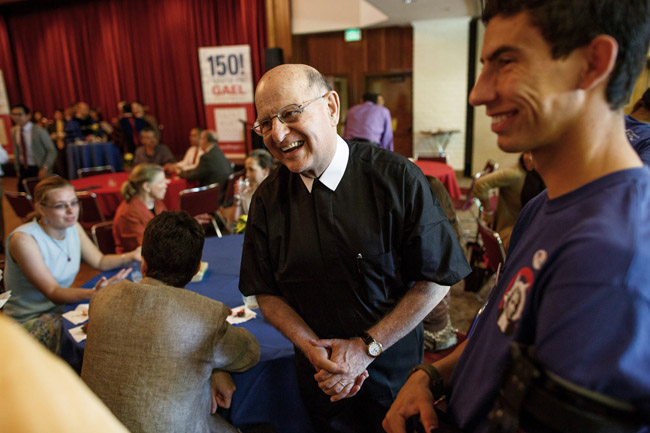 MORAGA, Calif. (CNS) — Brother Alvaro Rodriguez Echeverria, superior general of the Christian Brothers, stressed the need for all people to have access to education during an April 24 gathering at St. Mary’s College of California.

Brother Echeverria was presented with an honorary doctorate in educational leadership from the college during its De La Salle Week honoring St. John Baptiste de la Salle, founder of the Christian Brothers order which runs the college. The week’s events included Masses, guest speakers, and a poverty and hunger awareness run.

Brother Echeverria, born in Costa Rica, has lived in Rome since his 2000 appointment as his order’s superior general. He described the honor from the college as a tribute to all of the order’s leaders who have dedicated their lives “in service of education.”

He also thanked the school’s president, Brother Ronald Gallagher, and James Donahue, who will become the college’s first lay president in July, for sharing in the “worldwide Lasallian mission.”

“Tomorrow’s dilemma will not be between the haves and the have-nots but rather between those who know and those who do not.”

In an address to faculty members and students, Brother Echeverria urged them to recognize that globalization of human rights and knowledge is just as important as globalization of finances, culture and politics.

“Tomorrow’s dilemma will not be between the haves and the have-nots but rather between those who know and those who do not. As you understand very well, the key to the future is education.”

The superior general pointed out that in today’s changing world it is “more important to have the ability to continue learning than to know a lot, and the best universities will give priority to the former.”

He quoted St. Alberto Hurtado, a Chilean Jesuit, who said: “The first mission of a university is to shake up the world, and the first virtue of the university is to hear and feel that shakeup, that position of nonconformity in a world held captive.”

Brother Echeverria praised St. Mary’s College for its research on immigration and poverty and noted that the college has been recognized nationally for its role in serving the church and the broader community through student and faculty volunteering.

He said the university’s graduating class — 40 percent of whom are first generation college graduates — is a “multireligious, multicultural and multiracial community representing the diversity of the global community.”

“I would like to invite you to live by looking forward, certainly not forgetting your roots” to find new ways to help others and respond to today’s problems, he told them.

He also urged the students to follow the footsteps of St. John Baptiste de la Salle in “building a world where every person counts and is treated with respect and affection (and) where education and new technologies are at the service of justice, peace and solidarity.”

NEXT: Four wounded in church stabbing in Albuquerque; suspect held