Immigration rally cries out to Congress to fix range of problems 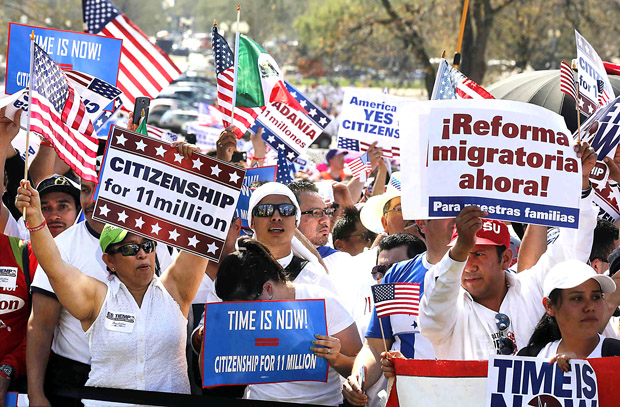 People rally for comprehensive immigration reform April 10 near the U.S. Capitol in Washington. Demonstrators urged lawmakers to support a path to citizenship for an estimated 11 million undocumented immigrants in the U.S. (CNS photo/Larry Downing, Reuters) 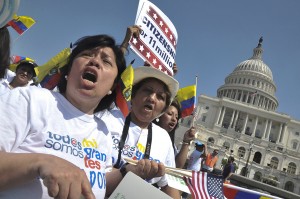 WASHINGTON (CNS) — From across the country, by bus, plane and train, tens of thousands of people calling for comprehensive immigration reform covered the West Lawn of the U.S. Capitol April 10, in one of more than a dozen similar events taking place around the United States.

Cries of: “Si, se puede,” Spanish for “yes, we can,” and “What do we want? Citizenship. When do we want it? Now!” rose from the crowd in Washington.

As an hours-long program of speakers, musical performances and prayers played out on a stage that only those closest to it could see, different groups and individuals on the platform and in the crowd talked and waved signs about the range of issues most important to them.

Signs reading “We build this nation, too,” “Immigration reform is central to women’s equality,” “Education, not deportation,” and “Let he/she who has no immigrant blood cast the first stone,” were interspersed with flags — mostly U.S., but also from Mexico, El Salvador, Ireland and other nations. On a blistering hot day when many trees hadn’t yet grown out leaves to provide full shade, the lawn, surrounding park space and the sidewalks around the Reflecting Pool were covered by a sea of white shirt-clad people.

The rally was organized as part of a nationwide campaign to push Congress to pass a comprehensive immigration reform law that addresses a range of problems with the current system.

A Senate bill being crafted by the bipartisan so-called “gang of eight,” was said by some members of the panel to be nearly ready to unveil, perhaps within the week. It is expected to incorporate goals such as a path to legalization and citizenship for the majority of the estimated 11 million people in the U.S. who lack legal status; increases in the number of visas available for workers, and changes to how family reunification visas are granted, all against a set of requirements for ensuring that the Mexican border is “secure.”

President Barack Obama is pushing for such legislation, but has been giving the Senate panel time to pull together a bill that might draw votes from both parties. Results of the 2012 election that gave Obama more than 70 percent of the votes of Latinos prodded Republican leaders to rethink their previous opposition to immigration reform that includes legalization or a path to citizenship.

Sentiments expressed at the rally gave a sense of just how complex the demands are for what legislation should accomplish.

One group from the Philadelphia area carried signs saying: “Fight for driver’s licenses, we pay taxes.” They said they want a state law allowing people to receive licenses regardless of their immigration status. Only a handful of states do not require U.S. legal residency to obtain a license.

One man told Catholic News Service he had a Pennsylvania driver’s license for 11 years. But the state law changed and the taxpayer ID number he previously was able to use for his license is no longer accepted. Carlos, who didn’t give his last name, said he was one of 4,500 people who lost their licenses because they couldn’t provide Social Security numbers. He said the solution to his problem is either to be legalized or to have the state resume allowing people to get licenses even if they are not in the country legally.

As one of several clergy offering prayers, Father Hoyos observed, speaking alternately in English and Spanish: “We don’t need a revolution, we need an exorcism.”

Rabbi David Saperstein, director of the Religious Action Center of Reform Judaism, noted that 36 times the Hebrew Scriptures call upon God’s people to “treat strangers well.” That teaching, plus the Jews’ history of being persecuted as a people lead today’s Jews to support immigration reform, he said.

“Can we reconcile God’s command with policies that keep families apart?” he asked. “America can do better.”

Stepped-up deportation under the Obama administration was cited by many people on stage and in the crowd as something that is making their lives more difficult.

U.S. Rep. Luis Gutierrez, an Illinois Democrat who has led the charge for immigration reform in the House, said when he left his home the night before, his family “knew I was coming back. Other families are not so lucky” because of the risk of deportation.

“We will fight until everyone in American who wants to return to their families has the same protections as a member of Congress,” said Gutierrez.

Carla Varela is a U.S. citizen who lives in suburban Maryland. She told Catholic News Service that many immigrant families she knows have been split apart when someone is deported.

“My brother came to the U.S. because he has a daughter here,” she said. He wanted to be a part of his then-baby’s life and felt he couldn’t help support her given inadequate job opportunities in his home country, Honduras. She said that four years ago he was pulled over by a police officer who acknowledged her brother hadn’t done anything wrong but was stopped because, “You look Spanish.”

Although her brother had a valid driver’s license, he answered truthfully when the officer asked if he was in the country legally. The police turned him over to Immigration and Customs Enforcement, which eventually deported him, after a few months of shuttling him around among different detention centers, she said.

Since then, Varela said, her niece’s mother has kept Varela and other relatives from seeing the child. “She says he needs to come back her before any of us can see her,” Varela said.

Martin, a butcher from Mexico who came on a 12-hour bus ride to Washington with his Catholic parish in Grand Rapids, Mich., said his lack of legal status means that he hasn’t been able to return to see his now-elderly parents in the 15 years since he left Guadalajara.

His three children are U.S. citizens, and every day “we worry about deportation.” He said he’s especially puzzled that it is so difficult to fix the problems with the immigration system given that so much of U.S. food production is done by immigrants, such as the many berry pickers who work in Michigan.

“Our life is here,” Martin said. “We only want an opportunity to lead our lives. We are all children of God.”