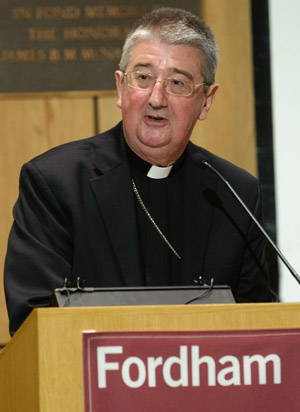 NEW YORK (CNS) — Renewal of the Catholic Church in a “post-Catholic” Ireland depends on a homegrown effort by the laity to overcome clericalism and witness the Christian message in a secular society, Archbishop Diarmuid Martin of Dublin told a New York audience.

Once considered “one of the world’s most deeply and stably Catholic countries,” Ireland, like other parts of Europe, can now be classified as post-Catholic because of sociological changes and lingering fallout from the child sexual abuse scandals that swept the country in recent years, Archbishop Martin said April 24 in a speech at Fordham University.

“You can only define post-Catholic in terms of the Catholicism that has been displaced,” he said.

The prelate described the Catholic Church in Ireland as being trapped in an illusory self-image when he became the archbishop of Dublin in 2004, but that the demographic majority the church enjoyed hid “many structural weaknesses” and that the church had become insensitive to them.

“The church leadership was out of touch with the religious sentiment of the people,” he said.

“The Catholic Church in Ireland had for far too long felt that it was safely ensconced on a ‘Catholic country.’ The church had become conformist and controlling, not just of its faithful, but of society in general. … Anyone who might have thought that ‘Catholic Ireland’ was anything like a perfect society must now be very disillusioned,” Archbishop Martin said.

Faith in Jesus requires looking beyond human horizons, changing the accepted way of thinking and trusting in God’s love, rather than in the tangible securities of day-to-day life, he said. “When faith leads to conformism, it has betrayed the very nature of faith.”

Further, the archbishop explained, the sexual abuse scandals involving clergy and religious men and women were mismanaged by Irish church leaders. Although the overwhelming majority of priests in Ireland live exemplary lives, it is impossible to “explain away the huge number of those (children) who were abused and the fact that this took place undetected and unrecognized within the church of Jesus Christ,” he said.

“One of the great challenges the Irish Catholic church still has to face is that of strong remnants of inherited clericalism,” the archbishop added. “The days of the dominant, or at times domineering, role of clergy within the institutional church have changed, but part of this culture still appears in new forms from time to time.”

Clericalism will be eliminated only by fostering a deeper sense of the meaning of the church and genuine renewal of faith in Jesus rather than through media strategies and simple structural reforms, he said.

The Irish Catholic Church can no longer rely on society to be the principal instrument for passing on the faith, Archbishop Martin said. People who reject the church but still consider themselves believers in Jesus run the risk of drifting into something that is of their own creation rather than a challenging, personal, rigorous, intellectual encounter with their faith, he said.

Archbishop Martin predicted the church will relinquish many of the institutional roles it has held in Ireland, but achieve a vigorous presence in society through the example of the laity working in social, economic, political and cultural settings.

Against a backdrop of cultural and political secularization, the church must respond to the desire of “Irish Catholics for deep renewal in formation in faith and in prayer,” Archbishop Martin added.

Archbishop Martin said Ireland needs homegrown answers for homegrown problems. While it shares similarities with other English-speaking countries, its Catholicism developed differently. There are even differences between practice in Northern Ireland and the Republic of Ireland.

Leadership in the future church will need to come from parishes with active laypeople, he said, while more attention must be given to young people. “Dealing with young people about faith is very demanding and requires time. They have need for a purpose and they won’t take superfluous answers,” the archbishop said.

Although it is tempting for the hierarchy “to close ranks and make sure nobody speaks out of tune,” Archbishop Martin said the people need “an Irish church that has the capacity to enter into dialogue with all those areas where Irish culture is taking place.”

Jesuit Father Joseph M. McShane, Fordham University president, conferred an honorary doctorate of humane letters on Archbishop Martin, citing “his efforts on behalf of social justice around the globe and his enlightened leadership of the Catholic church in Ireland.”

The event was sponsored by the Fordham Center on Religion and Culture.