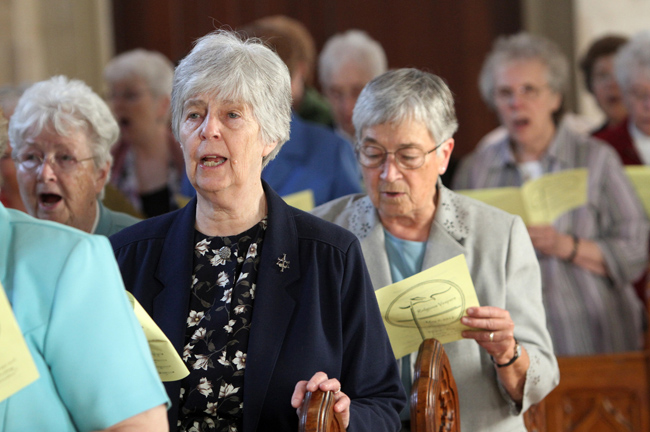 Archbishop Gerhard Muller, prefect of the Congregation for the Doctrine of the Faith, told the U.S.-based nuns’ group that he had “recently discussed the doctrinal assessment with Pope Francis, who reaffirmed the findings of the assessment and the program of reform for this conference of major superiors.”

The doctrinal congregation met April 15 with the LCWR leadership and Seattle Archbishop J. Peter Sartain, who had been assigned by the Vatican to oversee the reform of the pontifically recognized leadership group.

LCWR is a Maryland-based umbrella group that claims about 1,500 leaders of U.S. women’s communities as members, representing about 80 percent of the country’s 57,000 women religious.

The organization said in its statement that “the conversation was open and frank.”

“We pray that these conversations may bear fruit for the good of the church,” it said without further elaboration.

Last April, the doctrinal congregation issued an assessment of LCWR, citing “serious doctrinal problems which affect many in consecrated life.” The assessment called for the organization’s reform to ensure its fidelity to Catholic teaching in areas including abortion, euthanasia, women’s ordination and homosexuality. LCWR’s canonical status is granted by the Vatican.

During the April 15 meeting at the Vatican, Archbishop Muller said the group, like any conference of major superiors, “exists in order to promote common efforts among its member institutes as well as cooperation with the local conference of bishops and with individual bishops.”

“For this reason, such conferences are constituted by and remain under the direction of the Holy See,” said the written statement released by the doctrinal congregation.

“It is the sincere desire of the Holy See that this meeting may help to promote the integral witness of women religious, based on a firm foundation of faith and Christian love, so as to preserve and strengthen it for the enrichment of the church and society for generations to come,” the statement said.

The meeting marked the first time Archbishop Muller met with the LCWR leadership, giving him the opportunity to express “his gratitude for the great contribution of women religious to the church in the United States as seen particularly in the many schools, hospitals, and institutions of support for the poor which have been founded and staffed by religious over the years,” the statement said.

During the meeting, the archbishop “then highlighted the teaching of the Second Vatican Council regarding the important mission of religious to promote a vision of ecclesial communion founded on faith in Jesus Christ and the teachings of the church as faithfully taught through the ages under the guidance of the Magisterium,” it said.

Bishop Leonard P. Blair of Toledo, Ohio, and Bishop Thomas J. Paprocki of Springfield, Ill., were named last year to assist Archbishop Sartain in reviewing and providing guidance and approval, where necessary, of the work of LCWR. They were also to draw on the advice of fellow bishops, women religious and other experts.

Bishop Paprocki has said, “It is important to note that the doctrinal assessment of LCWR does not deal with the faith and life of the 57,000 women religious in the United States” nor is it meant “to call into question the faith and witness of so many dedicated and faithful women religious throughout the country.”

In an article he published last May in the Catholic Times, the diocesan newspaper in Springfield, the bishop said the major concerns center on “problematic statements and serious theological, even doctrinal, errors” in talks at LCWR’s annual assemblies; “policies of corporate dissent” on such issues as women’s ordination and ministry to homosexual persons; and the “prevalence of certain radical feminist themes incompatible with the Catholic faith” in some LCWR programs and presentations.

Bishop Paprocki had said the work with Archbishop Sartain and Bishop Blair included “the development of initial and ongoing formation material that provides a deepened understanding of the church’s doctrine of the faith” and “guidance in the application of liturgical norms” to give the Eucharist and Liturgy of the Hours “a place of priority in LCWR events and programs.”

“In sum, the purpose of the doctrinal assessment is to work collaboratively to renew LCWR and strengthen the doctrinal foundations that should guide the organization’s many important initiatives and efforts,” Bishop Paprocki had said.