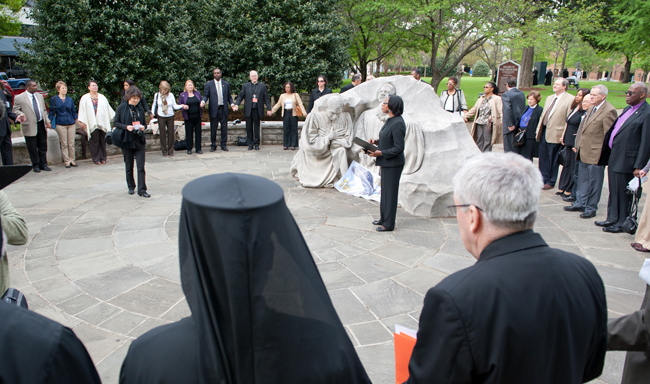 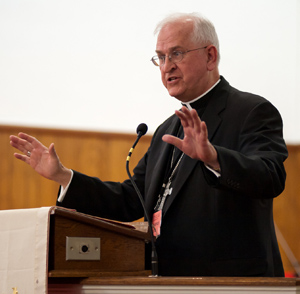 WASHINGTON (CNS) — Fifty years ago, the Rev. Martin Luther King Jr. took a group of white Alabama clergymen to task for suggesting he find ways, other than demonstrations and protests, to seek racial equality.

The civil rights leader did not mince words telling the group that included Protestant pastors, a rabbi and a Catholic bishop — Auxiliary Bishop Joseph A. Durick of what was then the Diocese of Mobile-Birmingham, Ala. — that he was “disappointed with the church.”

In their public letter to Rev. King, published in an April 13, 1963, newspaper, the religious leaders urged him to negotiate and wait for court actions and described the civil rights demonstrations in Birmingham as “unwise and untimely.”

Rev. King, held in solitary confinement for eight days for violating the city’s ban on civil rights demonstrations, began his response to the clergymen April 16, the fourth day of his prison sentence. He used a pencil to write on margins of a newspaper and slips of paper, and he only wrote during the day since his cell had no overhead light.

The letter, addressed to “My Dear Fellow Clergymen” became the famous “Letter from Birmingham Jail.” Pieces of it were smuggled out with his attorneys and an associate compiled them and gave them to Rev. King’s secretary to type. The 21-page letter was never sent to the religious leaders; they saw it when everyone else did, published in part in newspapers and magazines May 19, 1963.

In the letter, Rev. King explained why he felt compelled to participate in demonstrations, marches and nonviolent actions.

“I cannot sit idly by in Atlanta and not be concerned about what happens in Birmingham,” he wrote. “Injustice anywhere is a threat to justice everywhere.”

Jonathan Bass, history professor at Birmingham’s Samford University and author of the 2002 book “Blessed are the Peacemakers: Martin Luther King Jr., Eight White Religious Leaders, and the Letter from Birmingham Jail,” said Rev. King’s letter is “without a doubt the most important written document of the civil rights era.”

He told Catholic News Service April 15 that the letter was meant for a much broader audience than just these eight religious leaders but, since he wrote to them as a minister, it has deeply spiritual themes.

“Those who read this through a nonspiritual lens miss a lot of these truths,” he added.

For the letter’s 50th anniversary, public readings of the letter are taking place not only in Birmingham, but across the United States and in places around the world.

Religious figures in particular are not just reading the letter but responding to it. 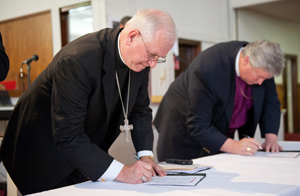 Leaders of U.S. Christian denominations who are part of the ecumenical organization Christian Churches Together gathered in Birmingham April 14-15 to sign a response to the letter and discuss its meaning then and now.

One participant was Archbishop Joseph E. Kurtz of Louisville, Ky., vice president of the U.S. Conference of Catholic Bishops. In an April 14 address to the gathering, he stressed the importance of responding to Rev. King’s words by asking forgiveness for past wrongs, appreciating efforts that have been made and being “resolved for more action.”

He commended steps made by the Catholic Church including its Aug. 23, 1963, statement “On Racial Harmony,” issued by the administrative board of what was then the National Catholic Welfare Conference, the predecessor of today’s USCCB. It said: “We must insist that the heart of the race question is moral and religious.”

He also quoted the U.S. bishops’ 1979 pastoral letter “Brothers and Sisters to Us,” which said that “racism is a sin: a sin that divides the human family, blots out the image of God among specific members of that family, and violates the fundamental human dignity of those called to be children of the same Father.”

In a telephone interview before the two-day gathering in Birmingham, the archbishop told CNS that when he reread Rev. King’s letter he “recognized not just what a classic it is, but how touching it is to uncover the soul of someone seriously trying to follow Christ” and trying to move people to action. 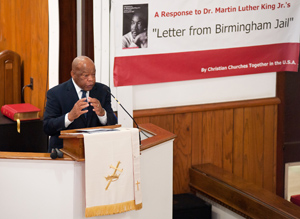 He said Rev. King’s words can have an impact today on religious leaders as they listen to one another and try to work together to bring about necessary changes which he described as “prayerful dialogue.”

Bass was able to interview six of the clergymen Rev. King addressed in his letter; all eight have died. He described Bishop Durick, who became bishop of Nashville, Tenn., as the “most fascinating.”

He said the bishop went from a “passive segregationist to a desegregationist and an integrationist in a very short period of time.”

Bass said the bishop had grown up in the South and “just naturally accepted the social order of segregation” but then “recognized the reality that desegregation was coming” and like the other religious leaders who challenged Rev. King, he wanted to be sure the “process of dismantling segregation would be peaceful and gradual.”

Bass said the events of 1963, not just Rev. King’s letter, had an impact on the bishop and changed his views.

After Rev. King’s assassination in Memphis, Tenn., in 1968, Bishop Durick walked in the front ranks of a civil rights march. He marched again the following year in a tribute to the slain civil rights leader.

At the two-day event in Birmingham, U.S. Rep. John Lewis, D-Ga., also addressed the gathering. “The civil rights movement was a religious movement,” he said, adding that he saw the efforts as “love in action.”

Activities included a morning prayer walk April 15 at Kelly Ingram Park. Those gathered for it were split into two groups, each following a path marking the routes of civil rights marches.

The two groups then rejoined and participants held hands and prayed at the “Kneeling Ministers” sculpture. The statue depicts the Revs. John Thomas Porter, Nelson H. Smith and A. D. King, kneeling in prayer after being confronted by Public Safety Commissioner Bull Connor during an April 7, 1963, protest. Rev. A.D. King was the brother of Rev. Martin Luther King.

Contributing to this story was Mary Dillard in Birmingham. She is on the staff of One Voice, the newspaper of the Birmingham Diocese.

NEXT: As Gosnell trial continues, voices rise against regulatory lapses