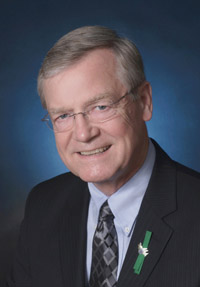 The Rev. Bob Edgar, a former member of Congress who headed the National Council of Churches for two terms, died April 23 at age 69. (CNS photo/courtesy Common Cause)

WASHINGTON (CNS) — The Rev. Bob Edgar, a former member of Congress who headed the National Council of Churches for two terms, died April 23 at the age of 69.

Rev. Edgar, a United Methodist minister, had a heart attack while exercising at his home in Burke, Va., according to Mary Boyle, a spokeswoman for Common Cause, the advocacy group he had headed since 2007.

As general secretary of the NCC beginning in 2000, Rev. Edgar was part of a reorganization of the council’s priorities, partly to eliminate a huge budget deficit. Early in his tenure in the job he was in the national spotlight while serving as an intermediary in the case of Elian Gonzalez, the Cuban child caught in an international custody dispute.

At the NCC, Rev. Edgar participated with the U.S. Conference of Catholic Bishops and other faith institutions in efforts to: promote an Israeli-Palestinian peace initiative; call for a clear U.S. policy condemning the use of torture; advocate for comprehensive immigration reform; pray for peace in Iraq; and encourage campaign finance reform.

Rev. Edgar was instrumental in launching Christian Churches Together, an ecumenical effort that united a diverse combination of Christian churches to focus on public policy, rather than issues of theology and belief. Its members range from Southern Baptists and Catholics to Orthodox, Mennonite and Bible churches. Its agenda currently focuses on poverty, evangelism and racial justice.

In a 2002 interview about the nascent organization, Rev. Edgar told Catholic News Service that one reason an entity like Christian Churches Together was necessary was that some churches were precluded from belonging to both the NCC and institutions such as the National Association of Evangelicals, because of theological disagreements. The USCCB did not and does not belong to the NCC, but is a part of Christian Churches Together.

Rev. Edgar said he envisioned Christian Churches Together as a way to bring a broader representation of churches to the prophetic mission of public policy.

Rev. Edgar, a Democrat, was elected to Congress from southeastern Pennsylvania in 1974 and stayed until he sought a Senate seat in 1986 and lost. He went on to be president of Claremont School of Theology in California for 10 years before being elected to lead the NCC. He had been president of Common Cause since 2007.

The Rev. C. Welton Gaddy, president of the Interfaith Alliance and a close friend of Rev. Edgar’s, said he had told Rev. Edgar just a few days earlier that “I admired the fact that I never once heard him stop hoping or saw him without a smile on his face.”

Gaddy said in a statement that “we spoke seriously about the personal cost involved in our commitment to the kind of unrelenting activity required in trying to make our country a better, more secure and more caring place to live. We both agreed the toll it took was worth it because of the passion we had for our work.”