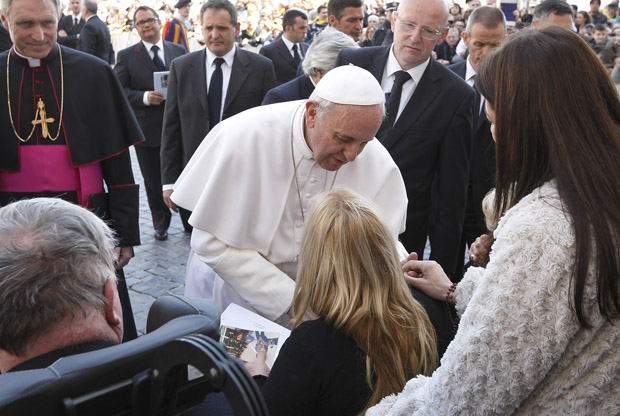 Pope Francis greets people in wheelchairs as he leaves his general audience in St. Peter's Square at the Vatican April 10. (CNS photo/Paul Haring)

VATICAN CITY (CNS) — A Christian isn’t a person who simply follows some commandments, but is a person who tries to think like Christ, “act like him, love like him,” Pope Francis said at his weekly general audience.

(See the text of the pope’s address.)

More than 30,000 people gathered in St. Peter’s Square for the audience April 10; the crowd included a group whose presence Pope Francis described — with a smile — as “very important”: directors of Argentina’s San Lorenzo de Almagro soccer team, which has been his favorite team since he was a child.

At the end of the audience, Pope Francis prayed for the victims of an earthquake that struck southern Iran April 9, killing more than 37 people and injuring hundreds. “I pray for the victims and express my closeness to the populations struck by this calamity. Let us pray for all these brothers and sisters of ours in Iran,” he said.

In his main audience talk, the pope continued a series of audience talks that Pope Benedict XVI had begun for the Year of Faith, reflecting on basic Christian beliefs.

Being a Christian, he said, means allowing Jesus “to take possession of our lives and change them, transform them, free us from the darkness of evil and sin.”

Jesus’ death and resurrection has a practical impact on believers, “just like a house built on a foundation; if this gives out, then the whole house falls,” he said.

Through the resurrection, the pope said, “we are freed from slavery to sin and become children of God.”

Being a child of God, a believer, isn’t something Christians can set in a corner of the room and ignore most of the time. It implies a relationship with God that is deepened daily through prayer, reading the Bible, receiving the sacraments — “especially penance and the Eucharist” — and through acts of charity, he said. 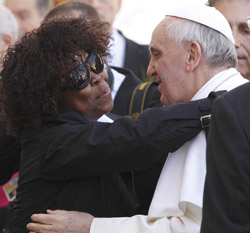 Patience Dodo of Gabon, who is blind, hugs Pope Francis as he leaves leads his general audience in St. Peter’s Square at the Vatican April 10. (CNS photo/Paul Haring)

“And God treats us like sons and daughters,” Pope Francis said. “He understands us, forgives us, embraces us and loves us even when we make mistakes.”

The pope told those at the audience not to listen to voices that try to tell them that God doesn’t matter or give in to the temptation of “putting God aside and ourselves at the center.”

Peace and joy come from knowing one is loved by God, he said. “God is our strength. God is our hope.”

Pope Francis said sadness and the temptation of despair is strong in today’s world, so Christians have an obligation to be “visible, clear, brilliant signs of hope.”

“How many times in our lives have our hopes been dashed? How many times have the expectations we carried in our hearts not been realized? Christian hope is strong, certain, solid on this earth that God has called us to walk on and is open to eternity, because this hope is built on God who is always faithful,” he said.

Unlike at his previous general audiences, Pope Francis read a summary of his main talk in Spanish, rather than having an aide do so. He stuck fairly close to the prepared text, adding just a couple of phrases to emphasize God’s fidelity and the Christians’ call to a new life “because through baptism we, too, are risen with Christ.” 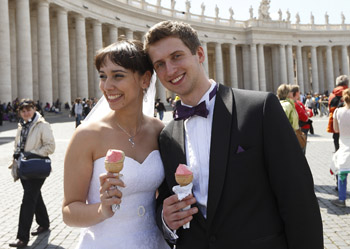 Among those present at the audience were Italian employees of the financially troubled IDI Healthcare, which is run by the Sons of the Immaculate Conception. In February Pope Benedict entrusted the leadership of the religious order to Cardinal Giuseppe Versaldi, and in early April Italian police arrested Father Franco Decaminda, who ran the order’s hospital in Rome, accusing him of misappropriating more than $5 million.

The employees of the hospital have not been paid in months. Greeting them at the audience, Pope Francis said, “I hope that a positive solution to such a difficult situation can be found soon.”

NEXT: God’s love is source of salvation, dignity, hope, pope says at Mass