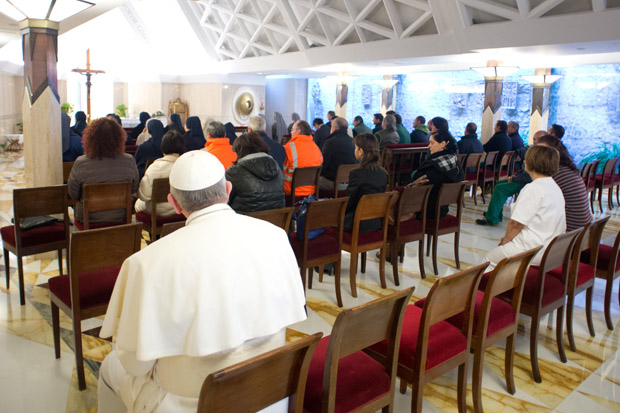 Pope Francis sits with Vatican workers after celebrating Mass March 22 inside the chapel of the Domus Sanctae Marthae, the Vatican residence where the new pontiff resides. The pope took a seat in the back row as people lingered for private prayer. (CNS photo/L'Ossevatore Romano)

VATICAN CITY (CNS) — A “double life” that honors both worldly values and the teachings of Jesus is not an option for Christians, even when obedience to God leads to persecution, Pope Francis said in a morning homily April 11. 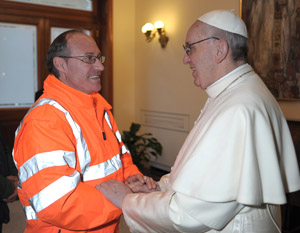 Pope Francis greets a Vatican worker after celebrating Mass March 22 inside the chapel of the Domus Sanctae Marthae, the Vatican residence where the new pontiff resides. (CNS photo/L’Ossevatore Romano)

The pope spoke at Mass in the chapel of the Domus Sanctae Marthae, the Vatican guesthouse where he has been living since his election in March.

Speaking to a congregation of employees of the Vatican newspaper, Pope Francis commented on the day’s reading from the Acts of Apostles (5:27-33), in which Peter refuses an order to stop preaching in Jesus’ name, saying: “We must obey God rather than men.”

At times we try to lead a “double life,” nurtured by “what Jesus tells us” as well as “what the world shows us,” the pope said. But God the father “gives us the (Holy) Spirit, without limit, to listen to Jesus and go along Jesus’ road.”

Following that road requires the “grace of courage,” the pope said, not only because obedience to God often entails persecution and the anger of the world, but because it means admitting one’s weakness. Yet failure should not be cause for despair.

“The Lord forgives us,” the pope said, “because he is so good.” 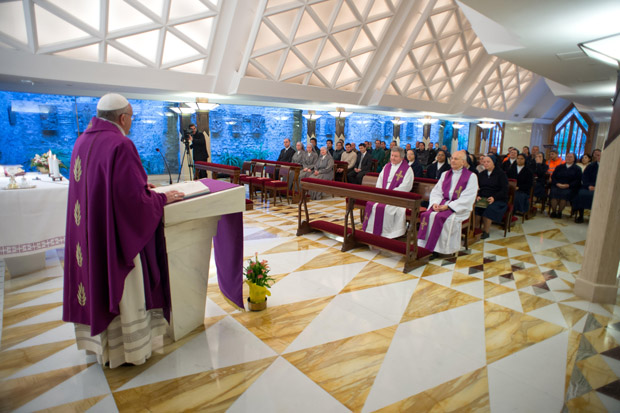 Pope Francis preaches during Mass March 22 in the chapel of the Domus Sanctae Marthae, the Vatican residence where the new pontiff resides. Among those in attendance were Vatican gardeners, garbage collectors and cleaning crews. (CNS photo/L’Ossevatore Romano)

PREVIOUS: Pope thanks Bala Cynwyd-based foundation for fight against poverty, work for peace