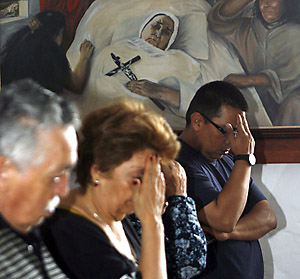 People pray next to a painting of of Blessed Mother Laura Montoya in Medellin, Colombia, Dec. 30. (CNS photo/Fredy Builes, Reuters)

His family and friends were preparing for the worst. He was given last rites. But then an image of Blessed Mother Laura Montoya appeared to him, he said.

“I remember it very well. In the moment, I was calm. I prayed to her: Help me get through this and it will allow you to get to the altars,” he told the newspaper El Colombiano.

Restrepo survived and was cured of his disease.

Pope Benedict XVI recognized it as a miracle last year, making it the second miracle attributed to Mother Montoya. In 1994, a Colombian woman, Herminia Gonzalez Trujillo, who had been hemorrhaging due to uterine cancer, was cured after praying to Mother Montoya.

Mother Montoya, who died in 1949 after a career spent working with poor indigenous Colombians in difficult circumstances, will be canonized May 12 and will become the first Colombian saint.

“It’s an incredibly important and happy moment for us,” said Sister Cristina Santillan of the Congregation of the Missionary Sisters of Mary Immaculate and of St. Catherine of Siena, which Mother Montoya founded.

That Mother Montoya will be the first saint born in the country is historic, considering Colombia is the sixth-largest Catholic country by population and that more than 82 percent of its population is Catholic, according to the Pew Forum on Religion and Public Life.

“For Colombians and for the congregation, this is a historic moment that we will cherish,” Sister Santillan told Catholic News Service in a telephone interview from Medellin, Colombia, where Mother Montoya died.

Mother Montoya was born in a small town in mountainous north-central Colombia in 1874. When she was just 2 years old, her father was killed during a civil war, leaving the family in extreme poverty, according to the Vatican’s biography.

Raised by her grandmother, Mother Montoya trained to become a teacher as a teenager. It was while teaching at schools in Colombia that she chose the religious life.

After an encounter with a group of indigenous Colombians who had been mistreated, Mother Montoya dedicated most of her adult life to working directly with the country’s poor indigenous population.

“This was a young woman who … at 35 years old decided to go into the jungle to search for indigenous (Colombians), on a mule along with other young women,” Sister Carmen Uribe wrote in a blog dedicated to Mother Montoya. “It was a 10-day journey to the reach indigenous peoples that (at the time) were considered savage, soulless and irrational.”

This work led her to start her religious order in 1914. She dedicated the rest of her career to working in indigenous communities, among the poorest and most marginalized in the South American country.

The congregation today has a presence in 21 countries and counts roughly 850 sisters, said Sister Santillan.

“We continue to work from the example she set for us,” she said.

Mother Montoya spent her last nine years in a wheelchair, dying at the age of 75 after a prolonged illness, according to the Vatican.

The effort to have her beatified began in the 1960s. Blessed John Paul II beatified her in 1994.

In April, the congregation she founded began to hold events to honor and inform the public about the importance of her work.

“This is the result of decades of work,” Sister Santillan said. “It will be a remarkable day.”

PREVIOUS: Prepare for Last Judgment by serving the poor, pope says at audience

NEXT: Church is driven by Holy Spirit, not officials or militants, pope says