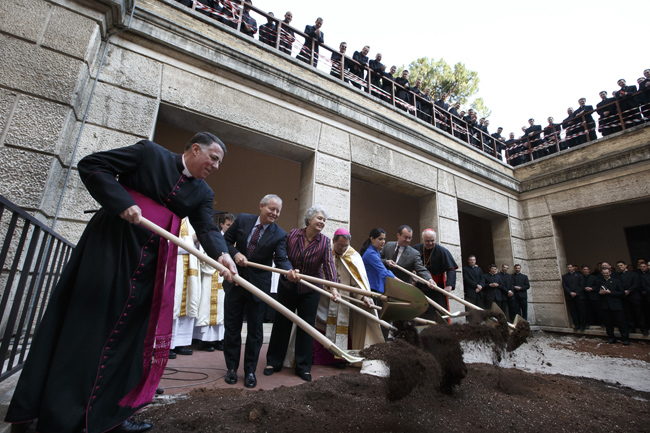 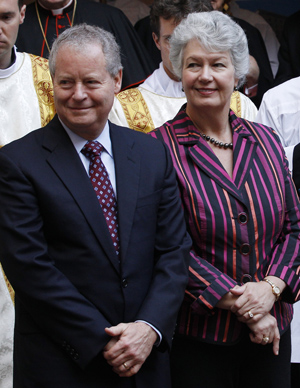 James and Miriam Mulva of Bartlesville, Okla., who donated $8.5 million for a new building and other improvements at the Pontifical North American College, are pictured during a groundbreaking for the building in Rome April 12. (CNS photo/Paul Haring)

VATICAN CITY (CNS) — Fresh soil on compact dirt, a small pile of rubble, incense, gold-trimmed liturgical vestments and the sound of dozens of young men singing “Holy God We Praise They Name” meant it was groundbreaking day at the Pontifical North American College.

The seminary, sponsored by the U.S. bishops, officially embarked April 12 on a $7 million project to build a 10-story, 36,000-square-foot tower to house high-tech classrooms, practice chapels where the students will learn to preach and celebrate the sacraments, administrative offices and more.

Archbishop John J. Myers of Newark, N.J., president of the North American College board of governors, presided over the groundbreaking. He described the new building as a gift of God’s generosity and the generosity of “those who hold dear our Catholic faith and the priesthood.”

James and Miriam Mulva of Bartlesville, Okla., made an $8.5 million gift to the seminary to fund the new building, technology updates throughout the existing facility and other improvements.

The Mulvas told Catholic News Service they became familiar with the college more than 20 years ago when their newly ordained assistant pastor arrived from his studies in Rome. The priest, now-Msgr. Daniel Mueggenborg, later served as the vice rector for administration of the North American College and introduced the Mulvas to the rector, Msgr. James F. Checchio.

“First we started to support a number of seminarians with scholarships and that led to some other small projects,” Mulva said. “What’s important to us is the church, education and youth — it’s all tied together here.”

His wife said, “We saw the great need,” because students were using classrooms in a basement with no windows. “We wanted to give back something, and the caliber of seminarians required that caliber of building.”

Her husband said, “The development of seminarians and priests is what makes the church grow and develop.”

The main campus of the North American College is on Vatican property on the Janiculum Hill overlooking St. Peter’s Square and Basilica.

The new building will rise on the south side of the existing building and be connected to it.

The Mulvas’ son, Jonathan, joined his parents, Msgr. Checchio, Archbishop Myers and Cardinal Edwin F. O’Brien, a former rector of the college, in wielding shovels at the groundbreaking.

Afterward, Archbishop Myers told CNS, “It’s astounding and very moving for us to find people who love the church so much and believe in the mission of the North American College that they will make this kind of gift.”

The archbishop said the requirements of preparing for the priesthood have changed, “for the better,” since he started his studies at the NAC 50 years ago and the building, inaugurated by Pope Pius XII in 1953, could not keep up.

Archbishop Myers also noted that among the close to 250 seminarians and young priests at the college, there are several from Australia and Canada — “we’re cousins.” The parishes where the students end up will have pastors who are “very well trained, with love for Lord, first of all — for his way and for proclaiming his love — love for the church and love for the Holy Father.”

PREVIOUS: Turkey to set up separate camp for Christians near Syrian border