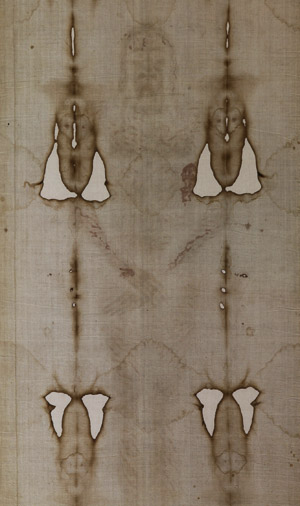 The Shroud of Turin is seen on display in the Cathedral of St. John the Baptist in Turin, Italy, in this 2010 file photo. (CNS photo/Paul Haring)

VATICAN CITY (CNS) — Even with modern scientific technology, the Shroud of Turin continues to baffle researchers.

Barrie Schwortz was the documenting photographer for the Shroud of Turin research project in 1978, an in-depth examination of what many people believe to be the burial cloth of Jesus.

Raised in an Orthodox Jewish home, “it took me a long time to come to terms with the fact that I’m a Jew and involved with probably the most important relic of Christianity,” Schwortz told Catholic News Service.

“Isn’t it funny how God always picks a Jew to be the messenger,” he said.

Schwortz said that he, along with the other members of the research team who came from various faith backgrounds, had to set aside personal beliefs and focus on the shroud itself rather than any religious implication it might carry.

“We were there to gather information … to do empirical science and do it to the best of our abilities,” Schwortz said. “It doesn’t have anything to do with my personal religious beliefs. It has to do with the truth.”

The Shroud of Turin is a 14-foot linen that has a full-length photonegative image of a wounded man on the front and back of the cloth. The scientific team spent five days analyzing the chemical and physical properties of the shroud, paying special attention to the topographical information showing depth that was encoded in the light and dark shading of the cloth.

“Our team went to Turin to answer one simple question: How was the image formed?” Schwortz said. “Ultimately, we failed.

“We could tell you what it’s not — not a painting, not a photograph, not a scorch, not a rubbing — but we know of no mechanism to this day that can make an image with the same chemical and physical properties as the image on the shroud.”

Testing has been performed on the shroud since the initial analyses, and the results continue to be contested. In 1988 carbon testing dated the cloth to the 12th century, leading many to conclude that the shroud is a medieval forgery.

In a paper published in 2005, chemist Raymond Rogers, member of the 1978 research team, challenged the claim that the shroud is a fake. He said the sample used in the 1988 carbon testing was a piece used to mend the cloth in the Middle Ages and that the methodology of the testing was erroneous.

Even though the controversy over the origin of the cloth does not seem like it will be determined any time soon, Schwortz said the shroud can still be regarded as a bridge between science and faith.

“I think the implication of the shroud, for those particularly of the Christian faith, is that this is a document that precisely coincides with the Gospel account of what was done to the man Jesus,” he said.

Schwortz said the public online technical database — www.shroud.com — that the team created should be used as a tool to learn more about the physical attributes of the shroud, but that individuals should draw their own conclusions about what it means for their faith.

“People often ask me, ‘Does this prove the resurrection?'” Schwortz said. “The shroud did not come with a book of instructions. So the answer to faith isn’t going to be on that piece of cloth, but more likely in the eyes and the hearts of those who look upon it.”

PREVIOUS: Church is driven by Holy Spirit, not officials or militants, pope says