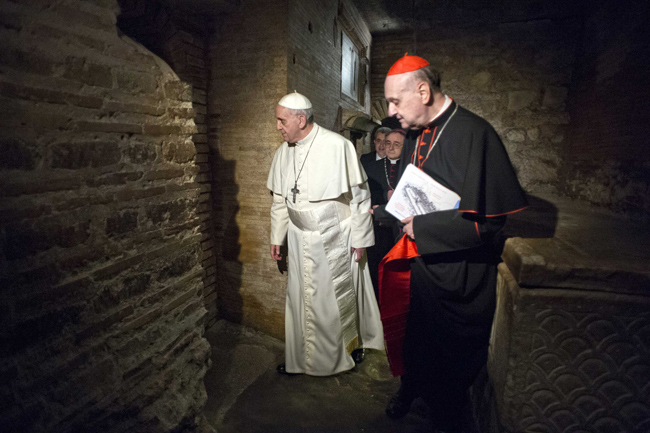 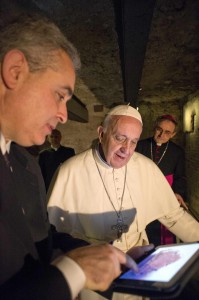 Pietro Zander of the office in charge of construction matters related to St. Peter’s Basilica shows Pope Francis something on a tablet computer as the pope visits the necropolis below the main basilica at the Vatican April 1. Looking on, at right, is Bishop Vittorio Lanzani, delegate of the Fabbrica di San Pietro. The necropolis is where St. Peter’s tomb has been venerated since early Christian times and where the first church dedicated to him was built. (CNS photo/L’Osservatore Romano via Reuters)

With explanations from the two directors of the necropolis, the pope walked down the central path between the mostly second-century burial chambers April 1, then went up a slight incline toward the tomb of Peter, which is directly under the main altar of St. Peter’s Basilica.

In the Clementine Chapel, “the place closest to the tomb of the Prince of the Apostles, the pope paused in silent prayer and in a deep and moving moment of reflection,” Father Lombardi said.

Pope Francis spent 45 minutes in the necropolis and in the grotto, where he paid homage at the tombs of several popes, including Popes Benedict XV, Pius XI, Pius XII, Paul VI and John Paul I, Father Lombardi said.

The entrance to the grotto and necropolis is across a parking lot from the Domus Sanctae Marthae, where the pope is living. The pope walked there and back, Father Lombardi said.

The necropolis is a burial ground where St. Peter’s tomb has been venerated since early Christian times and where the first church dedicated to the saint was built. The tomb is two levels below the main altar of the modern basilica.

On the level between the necropolis and the basilica is the Vatican grotto, the place where many popes and a few Catholic nobles have been buried since the 10th century.

The necropolis was excavated in the 1930s and ’40s, which led to discovery of a double row of mausoleums and niches decorated with paintings, stucco and mosaics, along with a section of simpler graves.

The archaeologists also discovered a bit of graffiti scrawled on a piece of red-tinted wall; dated to sometime shortly before the year 200; it reads “Petros Eni” (Peter is here). Nearby were found the remains of the altar the Emperor Constantine was believed to have ordered erected over St. Peter’s tomb in 324.

The bits of human bones found near the red wall and ancient altar were studied for years and became the object of intense debate among Catholic archaeologists. After almost 20 years of further excavation and study, Pope Paul announced in 1968 that the relics of St. Peter “have been identified in a manner which we believe convincing.”

Since 1998, the Vatican has been repairing and restoring the tombs, labyrinthine lanes and funerary artwork in the necropolis using state-of-the-art techniques. It also has set up a complete conservation and lighting system that controls the climate of the necropolis to prevent further damage.

PREVIOUS: Choice of Vatican secretary of state seen as key to curia reform