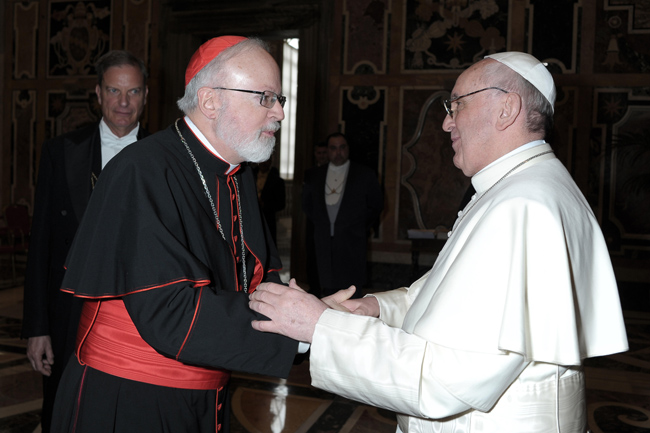 VATICAN CITY (CNS) — Amid rising concerns about corruption and mismanagement in the central administration of the Catholic Church, Pope Francis named an international panel of cardinals to advise him on the latest reform of the Vatican bureaucracy.

The Vatican Secretariat of State announced April 13 that the pope had established the group — which includes Boston Cardinal Sean P. O’Malley and Sydney Cardinal George Pell — to “advise him in the government of the universal church and to study a plan for revising the apostolic constitution on the Roman Curia, ‘Pastor Bonus.'”

“Pastor Bonus,” published in 1988, was the last major set of changes in the Roman Curia, the church’s central administration at the Vatican. It was largely an effort at streamlining by reassigning responsibilities among various offices, rather than an extensive reform.

Complaints about the shortcomings of Vatican governance increased markedly during 2012 following the “VatiLeaks” of confidential correspondence providing evidence of corruption and mismanagement in various offices of the Holy See and Vatican City State. That affair prompted a detailed internal report, which Pope Benedict XVI designated exclusively for the eyes of his successor.

The College of Cardinals extensively discussed the problems in meetings preceding the conclave that elected Pope Francis last month. According to the April 13 Vatican statement, the suggestion for an advisory panel on reform arose during those meetings.

Only one member of the new panel is a full-time Vatican official: Cardinal Giuseppe Bertello, president of the commission governing Vatican City State. All of the others currently serve as diocesan bishops.

The group’s coordinator is Cardinal Oscar Rodriguez Maradiaga of Tegucigalpa, Honduras, who is also president of Caritas Internationalis, a Vatican-based umbrella organization for national Catholic charities around the globe.

They will meet for the first time Oct. 1-3, 2013, the Vatican statement said, but are “currently in contact” with Pope Francis.

The panel’s membership represents five continents, with the largest number — three members — coming from the Americas. Three members, more than any other linguistic group, hail from English-speaking countries (counting India). Two members are native speakers of Spanish. Only one member shares the Italian nationality of the majority of Vatican employees.

A 1986 commission of six cardinals, whose recommendations contributed to “Pastor Bonus,” included two Italians, an Austrian, a Canadian, a Venezuelan and a Nigerian. All were serving as Vatican officials at the time.

The 15-member Council of Cardinals for the Study of Organizational and Economic Problems of the Holy See, established in 1981, also contributed to the process that produced “Pastor Bonus.” It has continued to meet twice a year, among other reasons to review the consolidated financial statements of the Holy See and Vatican City State. The council’s members hail from five continents, where they all serve as diocesan bishops.

The Holy See — whose major organs consist of the Secretariat of State, nine congregations, 12 councils and three tribunals — employed 2,832 employees as of the end of 2011. Its financial statements for 2011 showed a deficit equivalent to about $19.4 million at current exchange rates.

The commission governing Vatican City State, which is not part of the curia, employed another 1,887 persons at the end of 2011 and reported a surplus of the equivalent of $28.4 million, largely owing to revenues from the Vatican Museums.