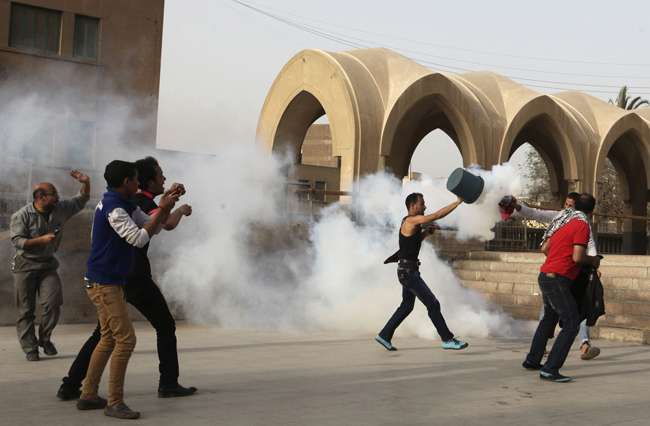 A man uses a bucket to put out a tear gas canister as Egyptians run inside St. Mark Coptic Orthodox Cathedral in Cairo April 7, while police fire tear gas during clashes with Muslims. At least two people died during the clashes outside the cathedral, and more than 80 were injured. (CNS photo/Asmaa Waguih, Reuters)

Some of the most serious sectarian violence occurred April 7 at Egypt’s main Coptic Orthodox cathedral in Cairo, when a crowd confronted angry Christian demonstrators shouting anti-government slogans as they were leaving the funeral of four Christians killed in a gunfight the previous day.

Police fired tear gas over the walls of St. Mark Orthodox Cathedral and reportedly stepped aside as the unknown assailants, armed with petrol bombs and other weapons, attacked those inside the cathedral grounds.

“The police not only didn’t protect the cathedral, but they fired tear gas into the cathedral,” said Alfred Raouf, an Egyptian opposition party member, describing the events to Catholic News Service.

Egyptian newspapers reported a Muslim who had been injured at the scene April 7 died of his injuries April 9.

The Cairo office of the U.S. bishops’ Catholic Relief Services reported in mid-March that “almost 11 incidents” of clashes between Muslims and Christians in Egypt had occurred over the past two years, and that as many as “100,000 Christian families” had already left the country over fears for their future.

Assad Attiya, a 48-year-old clerk in a downtown Cairo department store, said growing violence and a general “state of chaos” since the revolution had frightened his and other Christian families into applying for emigration to the United States through the U.S. green-card lottery system.

“All Egyptians, by nature, are kind (but) circumstances are now making everything bad, so I am afraid of you and you are afraid of me,” he told CNS.

He specifically mentioned incidents of Muslim-Christian violence in front of Cairo’s national television building in March 2011 and the following October in the predominantly Christian Cairo slum of Manshiyat Naser. Both incidents led to the death of at least 25 people, most of them Christians, and are among the several mentioned in a U.S. State Department’s human rights report, which said Egypt’s “government failed to prevent violence against Christians or stop the destruction of churches and religious minority-owned property.”

Raouf, the Egyptian opposition party member and a Christian, said it was important to remember that most abuses against Christians had taken place during the transition period directly after the revolution, when the country’s national military was in charge. But he said the April 7 violence was a sign the now-ruling Muslim Brotherhood was doing no better at managing Egypt, which he said continued to suffer from years of unchecked polemics by radical Egyptian Islamists toward the country’s Christian minority.

“All this sectarian tension is the product of the (former Presidents) Sadat and Mubarak” said Raouf, adding that all people in the country, Muslims and Christians, were suffering in present-day Egypt.

Democratic elections in Egypt last year resulted in a new government controlled largely by the religiously conservative Muslim Brotherhood, whose members were officially banned under the almost-three-decade, autocratic rule of former President Hosni Mubarak, who was overthrown in the January 2011 revolution.

Now, anti-Brotherhood and other protests, including among some of the country’s security forces, have resulted in often fatal clashes, lawlessness and heightened crime. Adding to these problems are skyrocketing prices for basic foods and an economy on the verge of collapse due to the almost total loss of international business and tourism, which previously accounted for major sources of Egypt’s national income.

The generally bad state of affairs in the country has worried many Egyptians, especially the Christian minority, who say at times of trouble — and moreover now when there is no strong government force to protect them — they risk becoming victims of attack.

“They feel they are very vulnerable. They are surrounded by the (Muslim) majority (and) they no longer feel comfortable. They feel … as American blacks in America did before civil rights, because there is no system that protects them,” said Maryknoll Father Douglas May, who has lived in Egypt for 18 years.

Father May said that, although under Mubarak there were restrictions on minorities, such as bans on building churches and large gatherings, the Christians felt safer because there was at least a sense that Egypt was under control.

Now, “They feel if there is an issue, there is vigilante violence,” May told CNS in March.

But Hani el-Mahdi, CRS country representative to Egypt, said the widespread hardships in present-day Egypt cut across sectarian lines and that both many Muslims as well as Christians were desperate due to huge unemployment, escalating prices, increased crime, instability and lack of security.

“The needs are immense, the economy is really deteriorating quickly (and) businesses are closing. Two thousand factories have closed in two years. If you take on average 200 (people) per factory, you understand how many have lost jobs,” he said. 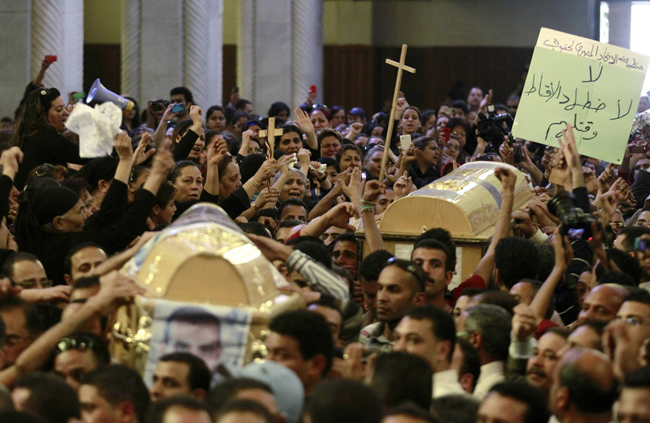