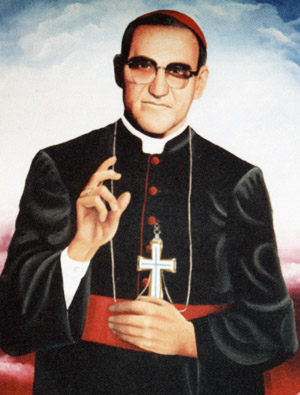 Archbishop Oscar Romero, an outspoken critic of human rights abuses in El Salvador who was gunned down while celebrating Mass in 1980, is seen in an undated painting. (CNS photo/Octavio Duran)

VATICAN CITY (CNS) — Archbishop Vincenzo Paglia, president of the Pontifical Council for the Family and the official promoter of the sainthood cause of the late Archbishop Oscar Romero of San Salvador, said the process to beatify and eventually canonize the slain Salvadoran archbishop has been unblocked.

Archbishop Paglia, who has been the postulator of Archbishop Romero’s cause for years, made the announcement in a homily April 20, just a few hours after meeting with Pope Francis.

The archbishop gave no more details, and his office said April 22 that no more would be said until there is something “concrete” to report.

In his homily, Archbishop Paglia said, “Martyrs help us live, help us understand there is more joy in giving than in receiving. This is why we need to preserve their memories.”

He added that he hoped Archbishop Romero and Bishop Bello — known for his care of the poor and his commitment to peace — could be beatified together “because Jesus always sent the apostles out two by two.”

Bishop Bello died in 1993; the Vatican approved the opening of his sainthood cause in 2007.

One of those supporters is Roberto Morozzo della Rocca, a professor of contemporary history in Rome, and author of “Primero Dios: Vita di Oscar A. Romero” (“God First: The Life of Oscar A. Romero.”

He said Archbishop Romero’s “enemies claimed there were theological errors” in his writings and sermons. “This took years of work to clear up,” della Rocca told Catholic News Service April 22.

The next step in the process is a formal papal declaration that Archbishop Romero died a martyr — that he was killed because of his faith. Opponents of his cause have claimed his assassination was politically motivated. The papal decree would follow a recommendation from the cardinals who are members of the Congregation for Saints’ Causes; they vote on decrees after reviews by separate panels of theologians and historians.

A miracle is not needed for the beatification of a martyr.

NEXT: One cannot follow Jesus, love Jesus without the church, pope says