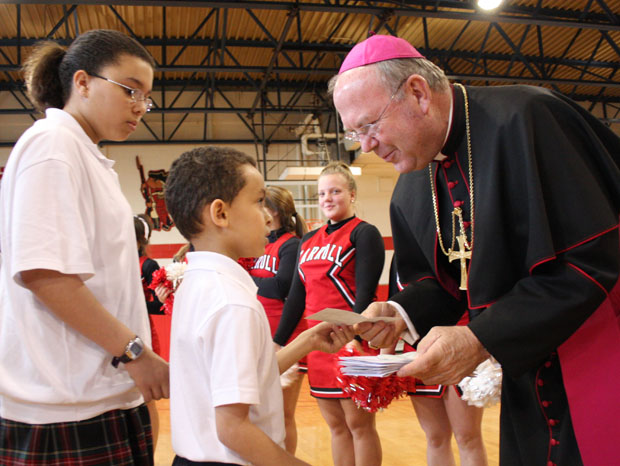 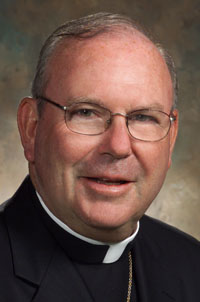 UPDATED — Bishop Joseph P. McFadden, a Philadelphia native and the bishop of Harrisburg, Pa., died suddenly in his hometown Thursday morning, May 2.

The bishop was in Philadelphia attending a meeting of Pennsylvania’s Catholic bishops and staying overnight in a rectory of a Philadelphia parish. He complained of illness when he awoke in the morning, and a priest of the rectory drove him to nearby Holy Redeemer Hospital.

Bishop McFadden succumbed in the car and was pronounced dead at the hospital at 7:40 a.m.

No cause of death has been announced. The bishop would have celebrated his 66th birthday later this month.

Archbishop Charles Chaput learned of Bishop McFadden’s passing later in the morning, and in a statement said he was “shocked and deeply saddened to learn of the sudden death” of the bishop. “I am grateful that I had the opportunity to be with him over the last few days at the annual spring meeting of the Pennsylvania bishops and spend time in conversation with him.”

The Harrisburg Diocese said it was announcing the bishop’s death “with deep sadness,” in a statement and biography of the bishop posted on its website Thursday morning.

Details on funeral rites for Bishop McFadden include four days of prayers before his funeral Mass at Holy Name of Jesus Church, 6150 Allentown Blvd., Harrisburg, Pa., on Wednesday, May 8. (See complete details on the viewing and funeral.)

The College of Consultors of the Diocese of Harrisburg, a council of priests representing the diocese, will elect a priest as administrator within eight days, the statement said. He will govern the diocese until Pope Francis appoints a new bishop as ordinary.

(See a Commentary on the bishop’s death from the Pennsylvania Catholic Conference, which he led as president.)

Bishop McFadden was born and raised in the Overbrook section of Philadelphia, attending Our Lady of Lourdes School, and continued to live, study and work in the city throughout his young adult life.

He attended the former St. Thomas More High School for Boys in West Philadelphia and St. Joseph’s University in the city.

An avid basketball player and fan, he coached at St. Thomas More while still in college. After graduating from St. Joseph’s with a degree in political science in 1969 he continued coaching and began teaching at West Philadelphia Catholic High School for Boys.

While there, he heard the call to priesthood and entered St. Charles Borromeo Seminary in Wynnewood – only blocks from his former parish of Our Lady of Lourdes.

He was ordained a priest in 1981 by Cardinal John Krol in the Cathedral Basilica of SS. Peter and Paul in Philadelphia, and a year later was named the Cardinal’s secretary. By 1991 he had been named a monsignor.

He held the post until 1993 when he became the first president of Cardinal O’Hara High School in Springfield. It was a new position that called upon Bishop McFadden’s strengths as a community builder and leader, not only of the students, faculty and staff but of the extensive alumni of the school and the wider Delaware County community.

In 2001 he was named pastor of St. Joseph Parish in Downingtown, and in 2004 he was ordained a bishop by Cardinal Justin Rigali. He served as auxiliary bishop of Philadelphia with responsibility for Catholic education until 2010, when he was appointed Bishop of Harrisburg and installed as the diocese’s tenth ordinary in August of that year. 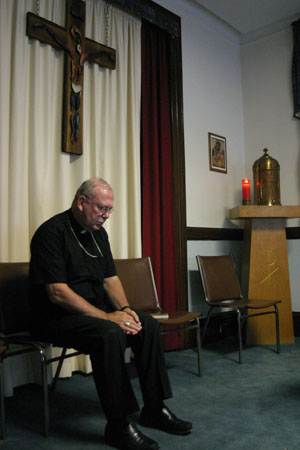 Archbishop Chaput said that for Bishop McFadden, the Archdiocese “was always close to his heart. He served the Church in Philadelphia as a faithful priest and auxiliary bishop. His love for the priesthood was evident in everything that he did. He worked diligently to promote vocations to the priesthood and advance the mission of Catholic education.”

Although the bishop led the Harrisburg diocese for only a short time, he “effectively embraced the call of our former Holy Father, Pope Benedict XVI, to use new forms of media to proclaim the message of the Gospel,” Archbishop Chaput said. “His service in our state capital was instrumental in fostering the teachings of the Church in the public square.

“As all of us here in Philadelphia mourn his loss. I extend the prayerful sympathy and condolences of the entire Church of Philadelphia to his family and many friends as well as the priests, religious and all the lay faithful of the diocese of Harrisburg. May God grant him the gift of eternal life, and give peace and consolation to all those who loved, admired, and respected him. In this Easter season may we all find hope in the resurrection of the Lord.”

Bishop McFadden was ordained an auxiliary bishop on the same day in 2004, July 24, as another Philadelphia priest. Bishop Joseph Cistone, now bishop of the Diocese of Saginaw, Mich., said he was “shocked and deeply saddened to hear of the sudden death of Bishop McFadden.”

“On my way to the office this morning, I received a call from Cardinal (Justin) Rigali,” Bishop Cistone said of the retired Archbishop of Philadelphia who both bishops had served as auxiliaries. “Bishop McFadden and I were consecrated as bishops by Cardinal Rigali in the same ceremony. We often referred to ourselves as ‘twin’ bishops.

“Although good friends before our becoming bishops, Bishop McFadden and I developed a close relationship in our common episcopal ministry.  We often called each other to talk about our particular dioceses and to encourage and support one another. Most recently, we arranged a date for getting together for golf and I had just purchased a card for his birthday which is May 22nd, four days after my own.

“Bishop McFadden has been a true servant of the Church. He was an ardent advocate for Catholic education and for the poor. He had a great affection for priests and was honored to be Bishop of the Diocese of Harrisburg.  The Church has lost a good bishop.  I will miss his friendship.”

“It was with great sadness that I learned of the sudden death of Bishop McFadden,” he said in a statement. “With all the faithful of the Diocese of Raleigh, I extend deepest sympathy to his family and all in the Diocese of Harrisburg.

“Bishop McFadden was a dear friend. I greatly admired his zeal and enthusiasm in teaching and proclaiming the Gospel. He was a holy priest and bishop who deeply loved our Lord, His Church and His Blessed Mother. May we strive daily to imitate his faithfulness and selfless service.”

Other associates of Bishop McFadden recalled fond memories of him as the reality of his passing sank in later in the day.

Richard V. McCarron, who served as archdiocesan superintendent of schools and secretary for Catholic education in a long career before his retirement early this year, worked for and with Bishop McFadden for many years in the Office for Catholic Education. He called the bishop’s death “a terrible loss,” and “definitely a loss for Catholic education.”

The bishop was motivated by the Gospel mandate to “go and teach all nations,” McCarron said, adding “he was tireless in working to support every facet of the educational process and athletics.”

At the same time, “he was also committed to the poor,” McCarron said, citing the bishop’s leadership in forming Drexel Neumann Academy in 2005 in Chester, a partnership of Neumann University, St. Katharine Drexel Parish in Chester, the Sisters of St. Francis and the Archdiocese that resulted in a stable Catholic school when the parish school verged on closure.

“He worked to make that a reality. He wanted the kids in Chester to have a first-rate Catholic education, and that school is thriving today.”

“He thought we needed to move away from the lecture process,” McCarron said, and toward more active learning by students. “He saw where Drexel (University) was moving in that direction, and he wanted to be on the cutting edge of education.”

Bishop McFadden brought his pastoral sense into all of his work, McCarron suggested. “He never micro-managed. He was a great listener, he listened intently.”

Besides being a “really a great person to work with, the bishop “loved the priesthood,” McCarron said. “He loved being a priest. It meant everything to him.”

Sister John Mary, a Dominican Sister of Nashville who worked with Bishop McFadden in Washington, D.C., on the U.S. Bishops’ Committee for Catholic Education that he chaired, most remembers “his love for the people of Harrisburg,” she said. “You could see the joy on his face when talking about the people (of the diocese).”

Sister John believes two hallmarks of his leadership in education were his passion for parental choice in education and Catholic identity in schools.

“He was very conscious of supporting parents to make the best choice,” she said. He believed “the Church should be of assistance” to parents and help their children understand that “their ultimate goal is heaven. We are forming their mind but also their heart, and (aiding) their eternal salvation,” she said.

Bishop McFadden believed “schools need to be clearly Catholic to parents and everyone who comes into them,” Sister John said. “He believed parents had a right to the truth that the Church is teaching.” His vision for Catholic students and the Church’s mission for education could be summed up simply, she said: “To learn the faith, to know their heritage, and the goal is eternity.”

Sister John recalled that the bishop was “a joyful man, so easy to talk to. He had a good sense of humor and could laugh at himself. We will miss him.”

PREVIOUS: Looking back on the full life of Bishop McFadden

NEXT: In his final moments, Bishop McFadden graced by sacrament, recalled people of diocese