In his final moments, Bishop McFadden graced by sacrament, recalled people of diocese 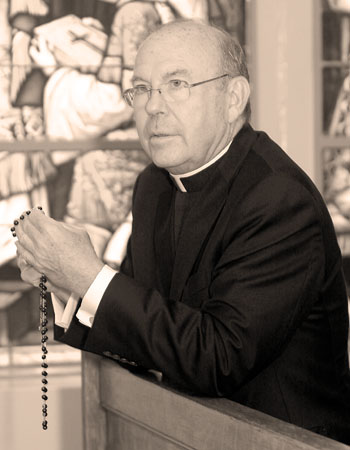 Bishop Joseph McFadden prays the rosary in the chapel of the Archdiocesan Pastoral Center, Philadelphia, in June 2010. (Sarah Webb)

Death came swiftly and silently for Bishop Joseph P. McFadden on the early morning of May 2, but it did not catch him spiritually unawares.

Two days earlier he had called Msgr. Joseph Garvin, pastor of St. Christopher Parish in Northeast Philadelphia, to say he would be coming down from Harrisburg to Philadelphia for a semi-annual meeting of the Pennsylvania bishops.

The bishop said he would like to stay at the now-vacant apartment on the grounds of St. Christopher’s, where he had lived before being named Bishop of Harrisburg.

The visit went well until that morning of May 2. It was about 6:30 a.m. when Msgr. Garvin’s phone rang.

It was Bishop McFadden. “Joe,” he said, “I think I’m having a heart attack. I need you to take me to Holy Redeemer Hospital.”

Msgr. Garvin hastily dressed, and taking a spare key went over to the apartment. When he got there Bishop McFadden was already dressed and sitting in a recliner.

Because the drive is a relatively short distance that didn’t seem unreasonable. Bishop McFadden assured Msgr. Garvin he could walk to the car, and as soon as they got into it, Msgr. Garvin, who knows the hospital number by heart, called ahead to alert the staff to be ready for them.

They had just turned on to Byberry Road when Bishop McFadden asked, “Joe, would you please give me absolution?”

“He’s a Godly man and he wants the sacraments of the Church,” Msgr. Garvin thought. He said the prayer of absolution and made the sign of the cross. Bishop McFadden blessed himself.

At that point Msgr. Garvin was expecting they would get to the hospital and treatment would start immediately and the bishop would be on the road to recovery.

It wasn’t to be. Very shortly after receiving absolution, Bishop McFadden slumped over.

Msgr. Garvin pulled off the road, called 911 and tried to administer CPR. Very quickly the fire department and EMTs arrived and took over. After trying to revive the bishop they placed him in the ambulance and raced to Holy Redeemer with Msgr. Garvin following.

There a team of about 15 medical personnel tried to resuscitate him but it couldn’t be done.

Over the next few days many people will share wonderful memories of Bishop McFadden. One of his last conversations with Msgr. Garvin should be a comfort to his flock in Harrisburg.

“Joe, you’ve done such a great job in Harrisburg, you’ve embraced the people, and have a great relationship with the state legislature,” Msgr. Garvin remarked.

Bishop McFadden replied, “I love the people and the priests of Harrisburg. God has been very good to me. I have accepted four students into the seminary and I have seven more to interview. God is really blessing us with vocations.”

One suspects God has already told him, “Well done, my good and faithful servant.”

NEXT: Friends remember Bishop McFadden as ‘kind of priest every priest should be’