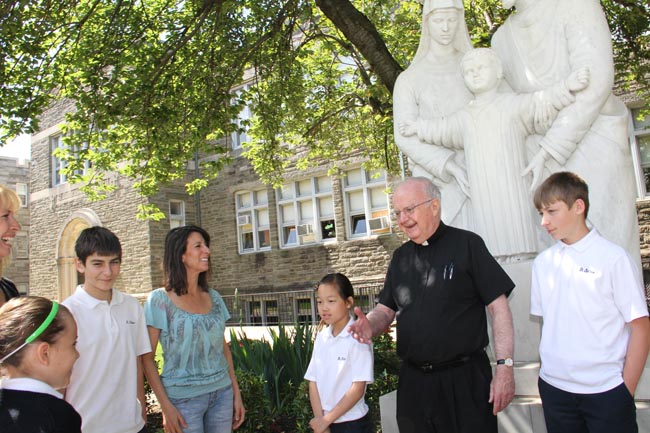 Msgr. Charles McGroarty, pastor of St. Matthew Parish in Philadelphia, says hello to the Huff and Evans families of the parish school. (Photos by Sarah Webb) 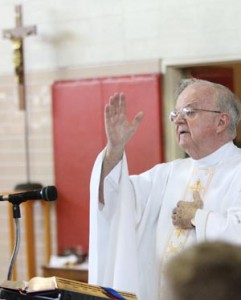 Msgr. McGroarty blesses the congregation during a Mass at St. Matthew School.

Of the 25 Philadelphia priests celebrating a significant anniversary this year, almost half — 12 — are celebrating 50 years of priesthood.

(See the complete list of archdiocesan priests celebrating anniversaries of their ordination to the priesthood.)

In a sense, Msgr. Charles E. McGroarty is senior among the Golden Jubilarians. For one thing he was actually ordained in Rome on Dec. 19, 1962, while the rest of his St. Charles classmates were ordained in Philadelphia on May 19, 1963. He was also a bit older than most of his classmates, because he had completed St. Joseph’s College before entering the seminary.

Originally out of St. Joseph Parish, Collingdale, and St. James High School, Chester, he went on to St. Joseph’s where he was a science major.

In 1953, the year his mom died, he received his call to the priesthood, influenced mostly by his pastor at St. Joseph’s, Father Andrew Lavin as well as the priests he’d known at St. James. But his dad convinced him he should wait until after his college graduation to enter the seminary, which he did.

Back in those days, St. Charles was not impressed with degrees in the sciences. What administrators wanted were future priests who were proficient in Latin and Greek, so he had to start all over again with another four years as an undergrad.

Maybe it was a reward of sorts for having to spend those four extra years in college, but in 1959 he was sent to Rome by Cardinal John F. O’Hara for studies at the Gregorian University with residence at the North American College. 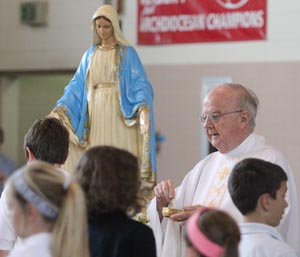 At any rate back in Philadelphia, St. Charles could have used the extra bed – that year there were 450 men in formation.

Although he was ordained by Archbishop Martin O’Conner, the rector of the North American College in December 1962, he finished his studies for his S.T.L. (license in sacred theology) in spring 1963 and returned to Philadelphia just about the time his classmates were being ordained.

After a summer at St. Agatha Parish in Philadelphia, he was sent to Roman Catholic High School for two years as a teacher in math and religion with residence at St. Raphael, Philadelphia.

Cardinal John Krol sent him to Catholic University in Washington where he earned a degree in sociology and marriage counseling. Back home in 1967 he was assigned to the former Catholic Information Center and also conducted extensive marriage counseling. He became first assistant director of the archdiocesan Family Life Office.

“There was a great emphasis in the Church on family life in the 1970s and 1980s,” Msgr. McGroarty recalls. “Every diocese in the area had a Family Life Office. They did a lot to support families and point out how important families were.”

It was a big deal — based on lists gathered by the parishes, each couple received a personal invitation from the Archbishop at the Cathedral, all the ladies received a flower and the couples were given a certificate.

“The Marriage Encounter people did a lot of work with us,” Msgr. McGroarty recalls.

During those years he had residence at St. Michael and St. Bartholomew parishes, both in Philadelphia.

He left the Family Life Office in 1987 to take up the pastorship of St. Matthew, a thriving parish in Northeast Philadelphia, where he remains to this day.

The prior experience working with the laity in previous assignments served him in good stead as a pastor in a parish that still has one of the largest elementary schools in the Archdiocese. At times he believes there is too much emphasis placed on negative aspects rather than the positive accomplishments of the Church that are all around us.

“The challenge of a pastor is to meet the needs of present-day Catholics,” he said. “We should publicize the good things that are being done, not putting our light under a basket.”

There are many good priests and nuns doing good work every day, including the priests, who along with him are celebrating these past 50 years of service to the Lord, Msgr. McGroarty firmly believes.

“Cardinal John Foley said he never had an unhappy day in the priesthood,” Msgr. McGroarty said. “I can’t say that, but I have had interesting challenges, I’ve worked with good people, and my priesthood has been very rewarding.” 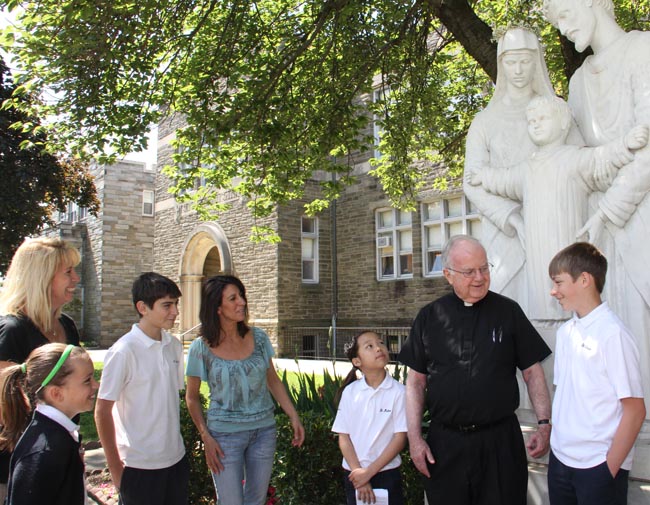 The pastor of St. Matthew Parish shares some time with students and faculty of the parish school, on the campus in Northeast Philadelphia.

NEXT: Temple-West’s legacy of feeding the hungry honored in new scholarship