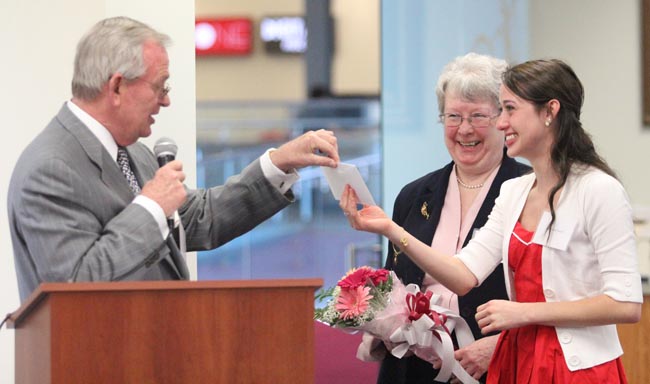 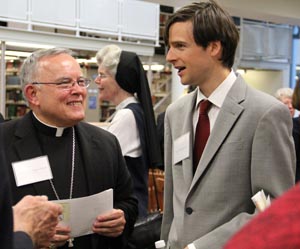 Patrick Temple-West, the late founding director of the Archdiocese of Philadelphia’s Nutritional Development Services, was recognized May 15 by the establishment of a permanent scholarship in his name by St. Joseph’s University’s Academy of Food Marketing.

The recognition is especially appropriate because he was initially on loan to the Archdiocese by the Academy of Food Marketing  when he became the director of NDS, which itself is probably the most enduring legacy of the Cardinal’s Commission on Human Relations, established by the late Cardinal John Krol.

Pat Temple-West remained director of NDS from the time of its foundation in 1971 until his death in 2009.

“Patrick is the heart of the agency,” said Lorraine Knight, his successor as director of NDS. “Much of what he did is in place and growing. I know he is looking down and smiling at what we are doing. It is always busy and that’s what we like.”

“Patrick Temple-West accomplished so very much which endures, and endures, and endures,” said Archbishop Charles Chaput, who offered a prayer at the ceremony. “I think it is important for the young who have a desire to help the poor to be encouraged in every way we can.”

The encouragement, of course, will be through the scholarship, which this year was granted to Food Academy freshman Madison Alexandra Smith, whose submitted essay spoke about ministering to the poor in New York City.

The scholarship, as presented by Food Academy Director Robert Higgins, was for $2,500 a year for four years but it was immediately doubled. Dr. Joseph D’Angelo, dean of the Haub School of Business of which the Food Academy is part, immediately offered matching funds, which means Smith will receive a scholarship of $5,000 a year for four years. The match was only for Smith, not necessarily future recipients as well.

“We are deeply humbled by this recognition of effort and the work he started and got rolling at St. Joe’s can continue to another generation,” said Pat’s son, Patrick C. Temple-West, who along with his mother, Patrice, and sisters Frances, Anna and Marija, attended the ceremony.

One of the hallmarks of NDS is the loyalty of the staff Pat Temple-West gathered that still remains faithful to the mission.

“I joined in 1979,” said Liz Hagedorn. “Hunger problems have not gotten better over all these years, they have gotten worse. Knowing there are hungry children out there is what makes it something I have to continue.”

Pat was an immigrant from England and a convert to Catholicism, she noted, calling him “a man of faith and a man who acted on his faith and instilled that spirit in others.”

Programs initiated by Pat Temple-West became models for similar programs all over the country. His impact in his own city was immense, according to Anne Healy Ayella, a St. Joseph’s University graduate and associate director of NDS who worked with Pat virtually from the beginning. 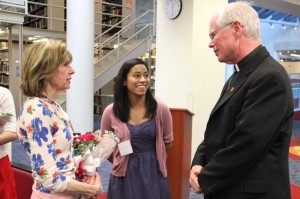 “He was responsible not only for Nutritional Development Services but for most of the good things that happened in nutrition programs in Philadelphia,” she said. “Most of the existing programs owe a lot in part to Pat’s wisdom.”

Indeed most of the other local food agencies had representatives at the program to honor Pat Temple-West.

Philabundance, which is now Philadelphia’s largest food agency, began in 1984 and Pam Lawler, the founder, well remembers the assistance Pat Temple-West provided without her having to ask.

“Moving perishables is what it is all about and when I met Pat I learned about the system,” she said. “He was fantastic. He was a legend and he did so much for so many people in the city.”

Thanks to the scholarship Pat Temple-West’s legend will continue at St. Joseph’s where it all began.

“He was a citizen, a Christian and a proud alumnus of St. Joseph’s,” said St. Joseph’s President, Jesuit Father Kevin Gillespie, who remembers Pat from his own student days. “He is an inspiration to us to never forget the needs of the hungry.”