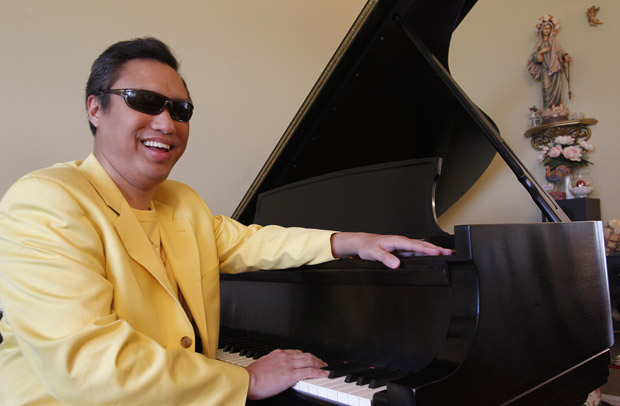 ANNANDALE, Va. (CNS) — Behind all the musical prowess of Carlos Ibay is a young man whose strong connection to the heart of Jesus can be recognized through the many outlets of his ingenuity.

It’s evident in his life, his voice and his song.

On a recent Sunday, seated high above the congregation in the choir loft of St. Michael Church in Annandale, the self-taught organist glides his fingers across the keys of an organ as he sings memorized hymn after hymn in an unforgettable voice.

“You do see the grace of God flowing through him when he plays and … sings,” Sharon Shafer, the parish’s music director, told Catholic News Service.

Music is Ibay’s passion. Ibay, 33, has been blind since soon after birth. He has used his love of music to inspire others to see the good works of God.

“I want to see God’s creation, to see his goodness,” he told CNS in a recent interview. “(But) the Lord deprived me of my sight.”

Born premature weighing a little less than 2 pounds, Ibay spent the first three months of his life in an incubator. He lost his eyesight because of retinitis pigmentosa, caused by too much oxygen in incubator.

As an infant, Ibay, better known as Chucky, would sit in his crib listening to a toy train that would go round and round playing the song “Twinkle, Twinkle Little Star.” Then one day he climbed up on the bench of his parents’ Hammond organ and played the song perfectly on the first try. Realizing they had a little Mozart in the family, his parents bought him a Steinway piano.

Ibay taught himself to play the piano and began singing along to the music at age 3.

“Accompanying myself became second nature for me,” he said.

“He is fully capable of accompanying himself,” said Harry Dunstan, founding artistic director of the American Center for Puccini Studies and Ibay’s current voice instructor. “(There are) very few people on the planet who can play and sing as well as Carlos.”

Ibay started taking piano lessons at age 6 and voice lessons at 15. He continued his studies at George Mason University in Virginia and later studied piano at the Mannes College The New School for Music, a classical music conservatory in New York.

But because he was busy with concerts and competitions around the world, Ibay dropped out of Mannes during his junior year. “It was tough,” he said.

He continued to take piano and voice lessons, performing in venues worldwide: from the Weil Recital Hall at Carnegie Hall, to the Arthur Rubenstein Master Piano Competition in Tel Aviv, Israel, to the Rachmaninoff Concert Hall in Novgorod, Russia.

“I met him when I was at St. Clare’s Catholic Church 10 or 11 years ago,” Shafer said, explaining that Ibay would play as a guest during the liturgy at the parish from time to time.

In 2008, Ibay started serving as an organist and cantor at St. Michael Church.

“Whenever I play and sing (even just practicing), I always offer it up for the glory of God,” he said.

Ibay has memorized the notes to hundreds of hymns and the words to many others. His mother will often pitch him the words to each new verse just before he has to sing them. When he cantors the Responsorial Psalm, he generally sings a cappella with no microphone so he can use his hands to read the Braille. With an indelible ability to project, his voice can be heard easily throughout the church.

Many people come up to Ibay after Mass to express how his music has touched their hearts.

“The goodness of God (seems to) come out of my music and it goes immediately to their souls,” he said.

Although he cannot see the people he meets, he remembers them by name and by voice. He also fluently speaks seven languages — French, German, Italian, Spanish, Russian, Japanese and Portuguese — which helps him connect with people.

Ibay spends four hours daily practicing piano and an hour on vocals. He said he believes in taking care of his health and regularly works out on an exercise bike and treadmill, which are each outfitted with a rosary and a water bottle.

Years of learning and playing music by ear have given him a heightened sense of hearing and smell, skills that those with sight usually do not have.

“The Lord deprived me of my sight not to look at bad things, (but rather) that God’s works might show forth (from my music),” Ibay told CNS. “I just keep going because God helps me go. All the angels and saints are pulling for me, and so I know I’m going to be all right.”

After talking with CNS, he sat down at the piano in his house to sing and play the popular duet “The Prayer.”

“I pray you’ll be our eyes, watch us where we go, and help us to be wise in times when we don’t know. Let this be our prayer, when we lose our way. Lead us to the place, guide us with your grace to a place where we’ll be safe,” he sang.

A member of the Holy Spirit Catholic Church youth group and other young adult activities in Northern Virginia, Ibay is an inspiring witness for his peers.

“Don’t give up on your dreams,” he said. “You have your whole life ahead of you. The Lord wants you to accept the gift of the Holy Spirit to open up your mind. You will succeed.”

NEXT: Increasing number of men pursuing ‘delayed vocation’ to the priesthood