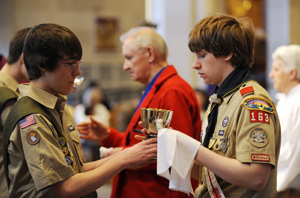 Boy Scouts serve as extraordinary ministers of holy Communion during a Catholic Scouting recognition Mass in 2010 at Sacred Heart Cathedral in Rochester, N.Y. The Boy Scouts of America voted May 23 to lift a ban on accepting openly gay Scouts as members, capping weeks of intense lobbying on both sides of the issue, the group said in a statement. (CNS photo/Mike Crupi, Catholic Courier)

In a statement, the organization said the decision to review the organization’s ban on accepting homosexuals as members was made based on “growing input from within the Scouting family.”

“Today, following this review, the most comprehensive listening exercise in Scouting’s history, the approximate 1,400 voting members of the Boy Scouts of America’s National Council approved a resolution to remove the restriction denying membership to youth on the basis of sexual orientation alone,” the statement said.

The announcement was made at the Boy Scouts of America’s annual national meeting, held at the Gaylord Texan Resort in Grapevine. The organization said it did not reconsider its ban on homosexual adults as Scout leaders and that the policy remains in place.

“The Boy Scouts of America will not sacrifice its mission, or the youth served by the movement, by allowing the organization to be consumed by a single, divisive and unresolved societal issue,” the statement added. “As the National Executive Committee just completed a lengthy review process, there are no plans for further review on this matter.”

The announcement of the policy change comes amid intense debate about the role of homosexuals in the Boy Scouts of America.

The National Catholic Committee on Scouting said that since the policy change does not take effect until next January, it will have “adequate time to study its effects.”

“The NCCS will determine how it may impact Catholic chartered Scout units and activities. In doing so, we will work within the teachings of our Catholic faith and with the various local bishops and their diocesan Scouting committees,” the Catholic organization said in a statement.

The Catholic Church teaches that people “who experience a homosexual inclination or a same sex attraction are to be treated with respect recognizing the dignity of all persons,” the statement said.

“The church’s teaching is clear that engaging in sexual activity outside of marriage is immoral,” it continued. “Individuals who are open and avowed homosexuals promoting and engaging in homosexual conduct are not living lives consistent with Catholic teaching.”

In a separate statement, the Washington Archdiocese said the Boy Scouts of America policy change “does not affect the teachings of the Catholic Church and the manner in which the Archdiocese of Washington conducts the Scouting programs under its purview.”

“Scouting programs seek to instill the importance of duty to God and to country, and groups chartered through the Catholic Church witness to the faith while continuing to provide an opportunity to involve youth in the life of the local parish,” it said in a statement.

“The church, through its clergy and lay leaders, has the responsibility to teach the Gospel and encourage all people to live out the teachings of Christ — regardless of their sexual preference,” it added.

The Denver Archdiocese in a statement said that the Catholic Church “agrees that no group should reduce a person to their sexual orientation or proclivity. However, the moral formation of youth must include a firm commitment to respecting and promoting an authentic vision of sexuality rooted in the Gospel itself.”

“While the Archdiocese of Denver will continue to allow parish-chartered Scouting organizations,” it said, “we will be steadfast in articulating a Christian understanding of human dignity and sexuality.”

At a news conference in Grapevine, John Stemberger, founder of OnMyHonor.Net, said that “on this day, the most influential youth program in America has turned a very tragic corner.” His organization is a nationwide coalition of parents, Scout leaders, Scouting donors, Eagle Scouts and other members of the Boy Scouts.

“The Boy Scouts of America has a certain logo and it has this phrase ‘Timeless Values.’ Today the BSA can no longer, in good faith, use this phrase,” he said. “It has demonstrated by its actions that the organization’s values are, in fact, not timeless. Instead, they are governed by the changing winds of polls, politics and public opinion.”

Stemberger said that according to the Boy Scouts’ own assessment, the move will cause as many as 400,000 current members to leave the organization.

“They also predicted they will lose $30 million of their $300 million budget,” Stemberger said. “That’s their estimates. Why they would do this just because some activists are screaming loudly makes no sense to me whatsoever.”

Regarding the organization’s decision to leave in place its policy against allowing adult homosexuals to be Scout leaders, Stemberger said a change in that policy will only be a matter of time.

Proponents of the change said they welcomed the move, but that the policy remains insufficient.

“We view this as a first step to full inclusion,” Zach Wahls, executive director of Scouts for Equality, said at a news conference in Grapevine. “For me, this resolution clearly doesn’t go far enough, but there is no doubt that for young men all over the country, this is a validation of who they are and an important testament to the ability of scouting to reconsider its position.”

Since then, gay rights activists have been lobbying the Boy Scouts to change its policy and have pressured corporations who give financial support to the organization to also push for the change.

According to the organization’s website, there are more than 2.6 million youths and 1 million adult members in the Boy Scouts of America. Catholic parishes and organizations across the country operate more than 8,300 scouting units, including the Cub Scouts, Boy Scouts and Varsity Scouts.

The Boy Scouts of America was incorporated Feb. 8, 1910, and chartered by Congress in 1916. Its stated mission is to provide an educational program for boys and young adults to build character, to train in the responsibilities of participating citizenship, and to develop personal fitness.

About 70.3 percent of the more than 100,000 chartered scouting units are sponsored by faith-based organizations, according to the Boy Scouts membership data. A breakdown shows:

— The Church of Jesus Christ of Latter-day Saints is the largest faith-based organization of chartered scouting units with 37,856 and 430,557 youth members. Church leaders have publicly supported the new membership standards.

— The United Methodist Church is the second-largest sponsor of Scouting with 10,868 chartered unit and 363,876 members.

New membership standards were floated in January by Boy Scouts. It gave sponsors of local Scout units the option of welcoming gays as youth members and leaders. The Boy Scouts then decided to survey its members before introducing a formal proposal for a vote by members.

The survey showed that of the 200,000 members who responded, 61 percent supported the current policy while 34 percent opposed it. Boy Scouts officials then decided to put the issue before the National Council.

In a late April statement, Bishop Robert E. Guglielmone of Charleston, S.C., liaison to the National Catholic Committee on Scouting for the U.S. Conference of Catholic Bishops, said that leaders and organizations that serve young people “have a responsibility to protect and foster a life of virtue according to their particular mission.

“Organizations have a duty to select leaders that model virtues and core values with integrity; Catholic-chartered (Scouting) units will continue to provide leaders who promote and live Catholic values. This is a matter of responsibility, not a matter of unjust discrimination, which is always wrong and contrary to the inviolable dignity of every human person,” he said.

The Catholic Scouting committee, he said, would continue to offer input to the Boy Scouts of America based on Catholic teachings and values.

Gonzales is a staff writer for The Texas Catholic, newspaper of the Diocese of Dallas. Contributing to this story was Dennis Sadowski in Washington.

PREVIOUS: No prayers at public meetings? Supreme Court will take up the case

NEXT: Gosnell trial’s details lead to hearings on bill to protect fetus from pain