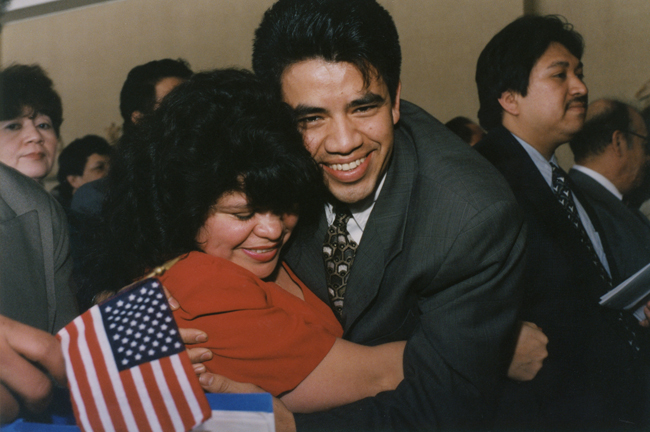 WASHINGTON (CNS) — Like it was yesterday, Vanna Slaughter pulls from memory the details of what was happening when Catholic Legal Immigration Network Inc., known as CLINIC, was created — 25 years ago.

When the U.S. Catholic bishops’ conference established CLINIC as a legal services adjunct to the more policy-focused Migration and Refugee Services, the immediate goal was to provide legal support to Catholic agencies that were assisting with a new immigration law that was helping millions of people legalize their status.

“It was Oct 13, 1986, and I was at the University of Texas in Austin at an immigration conference,” remembered Slaughter, the division director for Catholic Charities of Dallas, Immigration and Legal Services. A major overhaul of immigration laws had been in the works in Congress but everyone at the conference thought the bill was dead. The Simpson-Mazzoli Act, officially the Immigration Reform and Control Act, or IRCA, fell apart in conference committee after more than a year in the works and having versions passed by both House and Senate.

But that day, Slaughter remembered, word came that the bill had been revived and all the conference participants were asked to return to their rooms, get on the phone and urge their members of Congress to pass it.

She remembers the details because those phone calls marked the start of a whole new chapter in the Catholic Church’s outreach to immigrants. Slaughter spoke with Catholic News Service May 22 during an anniversary celebration for CLINIC at which she received the Silver Anniversary Network Leader Award. (Watch a video at the end of this story.)

The bill passed and was signed into law the following month, providing, among other things, a vehicle for about 3 million undocumented immigrants to legalize their status. Within a very short time, then-Msgr. Nicholas DiMarzio, the director of MRS, was asking the U.S. bishops to create a separate corporation to give legal backup to the handful of diocesan immigration service agencies. (Catholic Relief Services was and remains the only other separate corporation of the U.S. Conference of Catholic Bishops.)

“When I interviewed for the job, they asked me what I wanted to do with MRS,” recalled Bishop DiMarzio in a May 27 phone interview with CNS. He’d served for nine years as refugee resettlement director for the Archdiocese of Newark before being hired at MRS in 1985.

He knew he wanted a nationwide legal services corporation to provide the expertise such agencies lacked, the bishop said. “And that’s exactly what happened.”

“It was not simple at all,” continued Bishop DiMarzio, who has headed the Brooklyn, N.Y., Diocese since 2003.

There were complications about incorporating and implications for tax-exempt status, for example. MRS had legal assistance offices in Washington, New York, El Paso, Texas, and San Francisco, which had to be dismantled and folded into the new Washington-based headquarters of CLINIC.

But the pieces all came together and 25 years later, CLINIC has grown from 17 affiliated organizations to more than 200 Catholic and community-based immigration programs, with more than 300 field offices in 47 states. CLINIC has more than 1,200 representatives who have been accredited with the federal government to process immigration applications, along with attorneys who assist hundreds of thousands of low-income immigrants a year.

“It’s become the premier nonprofit legal services network in the country,” said Bishop DiMarzio, acknowledging a bit of pride in how his idea has evolved. He is currently a member of CLINIC’s board of directors.

Don Kerwin, former director of CLINIC and now a member of its board who also heads the Center for Migration Studies, said resettling refugees and helping immigrants integrate were among the original functions of the National Catholic Welfare Conference, the precursor to today’s USCCB. Its Bureau of Immigration was created in 1922, eventually evolving into Migration and Refugee Services.

When IRCA became law, dioceses quickly geared up with the help of CLINIC to provide low-income immigrants with assistance in applying.

Over the last 25 years, CLINIC programs have adapted with the times. Currently, groundwork is being laid for the potential passage of a new comprehensive immigration reform law. That includes plans to train employees and volunteers to process applications and to help parishes, dioceses and other organizations prepare communities by offering English classes and gathering documents, for instance.

“It’s a network that has grown with practically no federal funds,” Kerwin said. “There’s always been a huge amount of resourcefulness and individual drive.”

“It’s one of the expanding areas of church social ministry that’s not federally funded,” he said. “And the bishops have really stuck with it.”

In addition to IRCA, major programs in which CLINIC has had a role include:

— Establishing an attorney-of-the-day hotline; a hotline for asylum seekers; and a nationwide pro-bono project to represent immigrant children.

— Helping Haitians displaced by the 2010 earthquake and immigrants displaced by hurricanes Katrina and Rita to obtain permission to stay in the U.S.

— Creating a model for “know your rights” programs for detained immigrants that has been adopted nationwide.

At the anniversary celebration, Sister Maureen Kelleher, a member of the Sisters of the Sacred Heart of Mary, recalled that in CLINIC’s early days, the program she worked with among farmworkers around Naples, Fla., was struggling to help newly legalized immigrants get the documents to be able to work.

The Immigration and Naturalization Service wasn’t providing the work cards people needed to show employers, Sister Maureen explained. “CLINIC sued and it went all the way to the Supreme Court. We won.”

Bishop Richard J. Garcia of Monterey, Calif., who is CLINIC’s board chairman, said even bishops in regions far from the traditional immigrant-heavy states along the Mexican border are strong supporters. Recently, CLINIC’s work in helping victims of human trafficking has been a key focus for dioceses that haven’t traditionally dealt much with immigration issues, he said.

Cardinal Theodore E. McCarrick, retired archbishop of Washington, was on the board of CLINIC at its founding and has continued to regularly be involved with its work. He told the guests at the anniversary event that “you’ve been a family, watching out for migrants.”

When CLINIC was created “we realized the problems facing immigrants were not going away. And while MRS was working with the government agencies (on shaping policy) someone had to work with the people,” he told CNS. “It was a natural evolution from the policy work.”

“I wish more people understood” the work CLINIC does, Cardinal McCarrick added. “I wish the average Catholic realized this work is an expression of the challenge of the Lord when he said, ‘I was a stranger and you welcomed me.'”