FCC to try rewriting broadcast indecency standards; will it succeed? 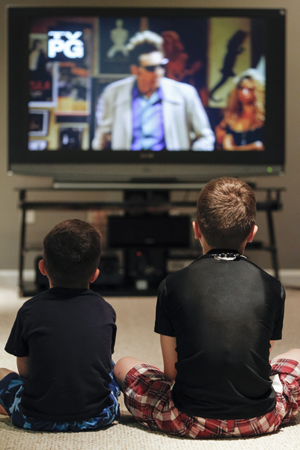 Boys watch TV at their home in Chesapeake Beach, Md., May 15.

WASHINGTON (CNS) — After running afoul of the courts yet again, the Federal Communications Commission is taking another stab at rewriting its regulations on indecent content on over-the-air television and radio.

Whether the regulations need to be rewritten, though, is another matter entirely.

The FCC has sustained its court losses in trying to fine networks for profanities uttered at awards ceremonies that aired on Fox and NBC, and also for the Janet Jackson breast exposure during the 2004 Super Bowl halftime show which aired on CBS.

But because the court rescinded the FCC punishment, does that weaken the FCC’s enforcement powers? And if that’s the case, what would a new regulatory framework look like?

Currently, no indecent words or images are to be aired between the hours of 6 a.m. and 10 p.m., when children are most likely to be awake and watching TV. The FCC asked for comments on whether those rules should be changed. The original deadline for the public comment period was May 20, but has been extended to June 19.

“This has been on the FCC’s plate for a long time,” said Helen Osman, USCCB secretary for communications. “And it would be great if they would be moved to come to some decisions on this.”

Osman noted the difficulties in regulating over-the-air broadcasting when it is fetching a shrinking market share in competition with cable TV, satellite radio and online forms of communication.

“It doesn’t affect cable, it doesn’t affect social media,” she said. “You’re talking about a limited but substantial piece of what people view, so its benefit to parents is questionable.”

Osman said the U.S. Conference of Catholic Bishops would not be filing comments on the latest proposal, saying the FCC would have to rely on past statements from the bishops.

One of those would be the 1998 pastoral statement “Renewing the Mind of the Media.” In it, the bishops delineated the responsibilities of media companies, parents and government.

“Besides doing its duty in enforcing the obscenity and child pornography laws in a variety of media, government should reassert its regulatory role with regard to the broadcast spectrum,” the statement said. “It is clearly established in law that the spectrum is owned by the public and is only leased to those who are licensed by the government to make use of it.”

“There should be no special rules regarding content at all” is their mantra, Grincewich said. “So we won’t have any (broadcast) license renewals,” if it were up to them, she added, and “we’ll amend the (Broadcasting) Act so that there are no public interest obligations.”

Cue “Renewing the Mind of the Media: “Licensing renewal should cease being pro forma and become once again a real evaluation of whether an entity has truly been broadcasting in the public interest, as indicated by consumer comments. The waning of the regulatory function — which was never overly burdensome — has had an enormous impact in terms of lowering standards and opening the door to increasingly offensive material.”

The next question is who within the FCC will handle the indecency matter. Current chairman Julius Genachowski has announced his resignation and is expected to leave his post by the end of May.

It could be just as well. In April, the weekend after the Boston Marathon bombings, the Boston Red Sox honored the bombing victims and the city’s resiliency in a televised pregame ceremony. Red Sox slugger David Ortiz uttered a profanity in speaking to a full house at Fenway Park.

Genachowski responded with a tweet: “David Ortiz spoke from the heart at today’s Red Sox game. I stand with Big Papi and the people of Boston — Julius.”

Mignon Clyburn, a Democrat, will be acting chairman until the proposed new FCC chairman, Tim Wheeler, is confirmed by a Senate sluggish to act on many presidential nominations.

According to Patrick Trueman, executive director of Morality in Media, about 94,000 comments on the indecency regulations had been sent to the FCC before it decided to extend the comment period.

“The comments were running at least a thousand to one against the new policy, which would give the broadcasters everything they want,” Trueman said. “The broadcasters want nudity and profanity. The public is burned up about it and is actively opposing it.”

He added, “Ninety-four thousand comments, and you’d be hard pressed to find one that favors the new policy. I searched for two days and I found one. Just one.”

Morality in Media has asked pro-decency groups to sign on to a letter to the Senate Committee on Commerce, Science, and Transportation and the House Committee on Energy and Commerce asking the FCC to stand firm on the current indecency rules.

To date, only two groups with the word “Catholic” in their name have signed on: the Catholic Family & Human Rights Institute, which focuses more on the United Nations and international policy, and Faithful Catholic Citizens, whose activities appear to be conducted strictly online.

“This proposal would only prohibit ‘deliberate and repetitive’ expletives, rather than all incidences, as the current FCC standard does,” the letter says. Further, the FCC seeks guidance on whether it should weaken its enforcement standard to allow for incidences of isolated, nonsexual nudity or continue to curb all such incidences from airing before 10 p.m.”

Trueman held out little hope for FCC chair pick Wheeler. “We have to assume he is not going to enforce decency standards” as Genachowski had not, because both were appointed by President Barack Obama, he said, and regardless of current standards being kept or new ones adopted, “the networks are going to file suit, saying the instructions are too vague.”

The Broadcast Act calls for “no indecency, no profanity,” Trueman said. “It’s called the public airwaves for a reason.”

NEXT: Diocese of Joliet, Ill., sued for alleged sexual abuse by priests