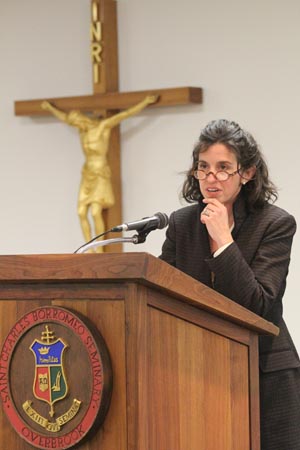 Helen Alvare speaks on women and religious freedom during the Year of Faith lecture at St. Charles Borromeo Seminary, Wynnewood, May 14.

WASHINGTON (CNS) — In dealing with several serious issues confronting the church and society today, “the only question is how you respond, not whether you should,” said Helen Alvare at the National Catholic Prayer Breakfast, held May 9 in Washington.

The response Alvare suggested to her audience: “As our leader (Pope Francis) is fearless, let us be fearless leaders.”

Alvare, an associate professor at the George Mason University School of Law in Arlington, Va., a suburb of Washington, said Christians can’t merely find issues on which to work. “Rather, they find us,” she added.

“You live when you live, in the place where you’re put, and you’re given the issues you’re given,” Alvare said.

The prime issue she raised in her talk was that “our government is today endorsing a view of intimate human relationships we might call ‘sexual expressionism.’ That is, it is championing as a cherished right, any consensual sexual act, with an emphasis on those (acts) divorced intrinsically or technologically from having kids, and even often divorced from forming any lasting adult relationship!”

She referred specifically to matters of abortion, contraception and same-sex marriage.

Alvare cited “decades of experience with sex, marriage and parenting practices that violate Catholics’ and, really, most Americans’ deeply held beliefs about what promotes the flourishing, of women — and men — and kids and societies.”

She added, “We know — even using the limited tools the world accepts as legitimate, that is, empirical data — that the new sex, mating and marriage marketplaces have treated women terribly — women, who were supposed to reap most of all of the advantages of separating sex and marriage and kids via contraception and abortion.”

“The poorest citizens … are disproportionately ill, intergenerationally downwardly mobile, and increasingly bereft of the fundamental goods of marriage and marital parenting, access to which I would argue should be the basis even for a new human rights, new civil rights struggle for those disadvantaged men and women who are called to marriage and parenting,” said Helen Alvare.

Alvare said, “Policymakers are all too often trying to deal with the gap between the advantaged and the disadvantaged on the cheap, right? First with more contraception, then more abortion, then when those don’t work, more long acting, invasive contraception — marketed especially to the poor — or emergency contraception, even for kids, then by forcing even religious institutions to go along with their program.

“And all this despite evidence that the only groups who have in the past received free contraception and sometimes government funded abortion, are the very groups who thereafter suffered the highest rates of nonmarital births, abortions and sexually transmitted infections,” Alvare continued.

“So not only do we have to challenge the government to take their mandates off conscientiously objecting individuals and institutions — and to insist that the government and their allies be held accountable for the damage their programs have done to women, children and to the poor in particular,” she said, but “we have also to be fearless in insisting that they turn their attention — real attention — to the poor and to women, with ideas and programs that do more than say, ‘Here, swallow this or implant that. It’s free.'”

Alvare said, “The poorest citizens don’t seem to be anywhere near the top of anyone’s political agenda these days. This is despite increasing evidence that the poor are suffering terribly — from inadequate schools, from unemployment or underemployment — at wages that can’t even keep up with the rising price of gas. They are disproportionately ill, intergenerationally downwardly mobile, and increasingly bereft of the fundamental goods of marriage and marital parenting, access to which I would argue should be the basis even for a new human rights, new civil rights struggle for those disadvantaged men and women who are called to marriage and parenting.”

The Catholic approach to poverty “has something to ruffle nearly everybody’s feathers,” she added. “Catholic teaching speaks clearly of the evils of consumerism, of the right to a living wage, and to educational opportunities and working conditions respectful of the dignity of workers and their families and their established communities and cultures, and respectful of the natural environment. These are radical proposals in an age of cutthroat price competition, skittish investors, and a global marketplace.”

Alvare said Pope Francis is “fearless, both on the imperative to begin thinking again about the invisible poor, and about preserving the links between sex, marriage and childbearing. We are proud to see him evangelizing the world with such messages — even when the reception is chilly, or worse, contemptuous.”

Bishop Michael J. Sheridan of Colorado Springs, Colo., urged prayer breakfast attendees to be active in the church’s new evangelization efforts. He said evangelization is “not simply about the spread of a message” but about making it “possible to have a relationship with Jesus, a personal relationship that gives new dimensions of meaning to our lives and demands from us a change of heart, a change in the way we live.”

The bishop also pointed out that part of the new evangelization is about “re-evangelizing those whose faith has grown lukewarm and those who have fallen away” and presenting the Gospel to them “in a way that is fresh and attractive.”

He said Christian married couples have a particular role to play in evangelizing by the example of their lives and the encouragement they give others.

He said he admires married couples for their “love and sacrifice” and prayed that their love would always be a source of joy and abundant life. “This after all is what Christ came to bring us. Let him be the center of your life and relationships,” he added.

NEXT: Father Pavone: ‘Truth of abortion’ exposed in trial will bring end to abortion