Immigrants at rally say legislation fight is all about the papers 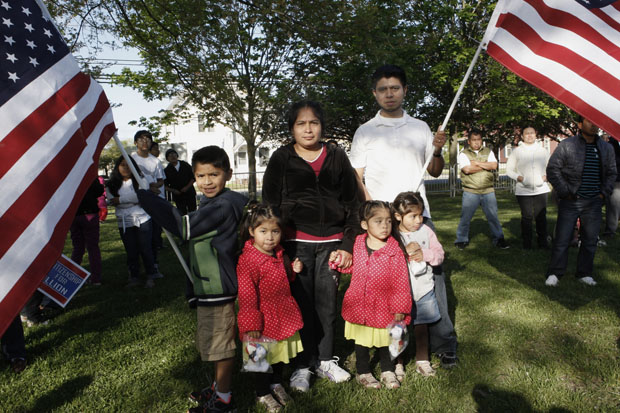 GEORGETOWN, Del. (CNS) — For the residents of this small town in agriculture-focused Sussex County, the pending immigration reform legislation in Congress is first and foremost about papers.

Work permits, Social Security cards, permanent residency or green cards, and driver’s licenses — that’s what the mostly Guatemalan immigrants in Georgetown say they most look forward to should the legislation become law.

“To get a good job, you need a Social Security number,” said Adriana, who came from Guatemala with her husband 11 years ago. Some of her seven children, ages 2 to 11, clambered on her and one another as they waited not-very-patiently for a two-hour May Day immigration reform rally to end. For her husband to be able to get a better job than his work at a recycling plant would “change everything,” she told Catholic News Service.

A better job would enable them to send more money to support their struggling relatives in Guatemala, and the better future she envisions for her children will be more assured, she said. Having papers that say she’s in the United States legally would mean Adriana could travel back to Guatemala to see her mother and introduce her to the grandchildren she has never met.

“Without papers, nothing is easy,” she said.

At the May 1 immigration rally, more than 1,000 adults and nearly as many children gathered in a park a few blocks from the center of the 5-square-mile, 18th-century town set among the Delmarva Peninsula’s miles of flat farmland.

Chants echoed in English and Spanish of: “What do we want? Justice! When do we want it? Now!” and “We are here and we’re not leaving, if they kick us out, we’ll return;” and “Delaware heard and we are in the battle.”

The town of 6,500 has grown nearly 40 percent since 2010, with much of the increase among its Latino population. The U.S. Census Bureau estimates 48 percent of Georgetown’s population is Latino or of Hispanic origin. In 1990, they were just 2 percent. In 2011 estimates, non-Hispanic whites accounted for 35 percent and blacks made up 15 percent of the town.

Poultry processing, agriculture and the tourist industry of nearby beach resorts are where many of the immigrants work. Those who work among the immigrants estimate that the majority lack permission to be in the United States, though many have been in the region for a decade or more. 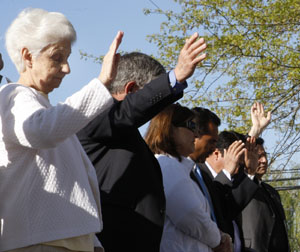 Sister Rosa Alvarez, a Carmelite Sister of Charity, and others pray during an immigration rally in Georgetown, Del., May 1.

Sister Rosa Alvarez, a Carmelite Sister of Charity who works with pre- and post-natal care services, roused the crowd at the rally by observing that she has been involved in helping families with the birth of 5,000 babies during her 18 years with La Esperanza, a social service agency which she helped found.

“They are my family,” she said, adding that she shares the pain of these families when someone is deported or when they are unable to be reunited because of inability to travel.

“Children are being denied the opportunity to be with their parents,” she said.

The rally emcee, regional radio personality Kevin Andrade, turned Sister Rosa’s population demographics into a discussion of voting power. “How many of those children were born 18 years ago?” he asked. “If it was 1,000, we have 1,000 new voters this year.”

Speakers talked about their own experiences of struggling to find ways to legalize their status. One young woman said her life changed once she received a work permit through the Deferred Action for Childhood Arrivals program begun last summer. Describing her childhood as a new immigrant who spoke no English, Monserrat Celayos said she “decided that being afraid was not going to stop me” from succeeding in her new country.

An evangelical minister described being able to go to college, receiving his theology degree and beginning a ministry once his legal status changed.

As November election results showed, he said, times are different now, with Latino voters standing up to demand consideration of the needs of their extended families.

“Our people have suffered discrimination and persecution,” he said. “But the greatest pain is to see a family separated by the law.”

Just as the fall of the Berlin Wall was a sign of a changing time, so will rallies such as this one be seen as a starting point for a changed environment for immigrants, Father Gomez said.

The rally was one of dozens held around the country intended to rev up support for legislation such as S. 744, an 844-page bill moving through the Senate. The House of Representatives has had piecemeal immigration bills introduced; reportedly a comprehensive bill is being drafted by a bipartisan panel of members.

The Senate bill, among other provisions, incorporates the popular DREAM Act, without an upper age limit; would offer a 13-year path to citizenship for undocumented immigrants who arrived before 2012; would expand the pool of visas for skilled and unskilled workers; dramatically changes the process for adult children or siblings of legal residents to immigrate; and would create a new set of “triggers” for determining that the border is “secure” before parts of the law may be implemented.

In Georgetown, many came to the rally because they hope to one day get documents allowing them to improve their lives.

Abimael, an agriculture worker from Chiapas, Mexico, met his Guatemalan wife in Delaware. Their four children are U.S. citizens.

When he first came to the U.S. 13 years ago, Abimael said he tried to legalize his status, but he wasn’t approved. While he acknowledged it’s sometimes difficult to function without a driver’s license or Social Security number, moving back to the poverty of either Mexico or Guatemala isn’t the answer, he said.

“We’re here for them,” he said, gesturing to his young children.