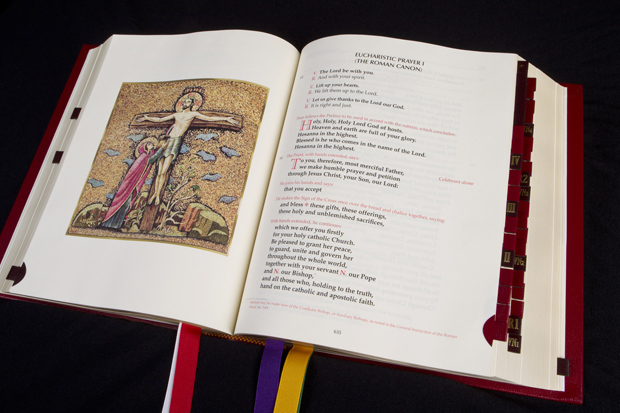 The first eucharistic prayer is seen on a page from a copy of the new Roman Missal in English published by the U.S. Conference of Catholic Bishops. (CNS photo/Nancy Phelan Wiechec)

WASHINGTON (CNS) — A majority of U.S. priests said they dislike the translation of the Roman Missal introduced at Advent 2011, a new survey found.

The survey (view the full report here) by the Godfrey Diekmann, OSB Center for Patristics and Liturgical Studies at St. John’s School of Theology-Seminary in Collegeville, Minn., also found that 80.1 percent of respondents found some of the language in the missal “awkward or distracting.”

Researchers conducted the survey from February through early May. A total of 1,536 priests participated, a response rate of 42.5 percent. All 178 Latin-rite dioceses in the U.S. were invited to participate in the survey; 32 dioceses accepted the invitation. There are more than 14,000 priests in the U.S.

“(Priests are) voicing some struggles and frustrations. As the report itself points out, their own kind of love for the liturgy comes out and love for their people comes out. That’s kind of nice,” said Father Daniel Merz of the U.S. Conference of Catholic Bishops’ Secretariat of Divine Worship.

Chase Becker, the survey’s project manager, described the results as surprising in an interview with Catholic News Service.

“When you look through the optional comments that priests were able to leave, I just was really struck by the things that surfaced,” Becker said. “A lot felt the translation affected negatively on their own prayer life or the ability to connect with their parishioners.

“These priests have devoted their lives to their work, and the celebration of Mass is the huge part of their work and their own identity as priests. Clearly this is something that has touched them on a very deep level,” he said.

Father Daniel Merz, associate director of the U.S. Conference of Catholic Bishops’ Secretariat of Divine Worship, welcomed the findings, but was cautious in accepting them without question, especially after a more detailed survey of laypeople last fall by the Center for Applied Research in the Apostolate at Georgetown University found that 70 percent of respondents said the translation was a “good thing.”

“The (bishops’) Committee on Divine Worship and the bishops will be very interested in studying the full report as well as the one I would say is more scientific that CARA put out,” Father Merz told CNS. “We’re going to put those together so it’s not just one or the other. We want to get an idea of the whole church.

“I do think it’s important to listen to what these priests and other priests are saying. They’re voicing some struggles and frustrations. As the report itself points out, their own kind of love for the liturgy comes out and love for their people comes out. That’s kind of nice,” Father Merz said.

Father Merz said the findings would be helpful as the bishops prepare to vote on changes in prayers in the rites for marriage and confirmation that will be voted on at the U.S. bishops’ fall general meeting in November as well as the Liturgy of the Hours down the road.

“I wouldn’t perceive this survey stopping those translation projects, but at the same time it might make the bishops and others involved in the process a little more involved, a little more attentive. That could potentially be a good thing from the survey,” he said.

The translation process for the Roman Missal, coordinated by the International Commission on English in the Liturgy, took a decade to complete as the bishops’ conferences in English-speaking countries reviewed, revised and prayed over the wording that would become standard at Masses around the world.

Msgr. Andrew R. Wadsworth, ICEL executive director, said in comments posted online by the Diekmann Center that accompanied the survey’s release May 21 that the priests who responded represented a small portion of the more than 14,000 priests in the U.S.

“The new translation clearly has a different voice and the survey shows that some priests do not like it,” Msgr. Wasdworth said in his online comment. “Whether they are representative of wider opinion is not ascertained by this survey.”

Becker said the survey avoided seeking demographic information altogether in order to gauge the views of priests as a whole.

The survey looked at a variety of factors to weigh the views of priests. The overriding concern priests expressed in comments left on the survey site was that the language seemed to separate them from the people in the pews.

Nearly half of the respondents, 48.7 percent, said they disapproved of the way the Vatican handled bringing about the new missal, indicating they felt it was a top down process. Forty percent of priests said they approved of the Vatican’s leadership in the process.

Father Merz said that discussions on the translation involved Catholics versed in liturgical language and practices at various levels of the U.S. church.

“On this side of the Atlantic, from the bishops’ side and ICEL’s side, that would be a misrepresentation of what happened,” he said. “From this side, it was very inclusive. This was one of the most widely consulted documents that we’ve ever produced. It went back and forth to so many groups and people. I’m qualifying that on this side it was not top down.”

NEXT: Immigration bill moves to full Senate after approval by Judiciary Committee