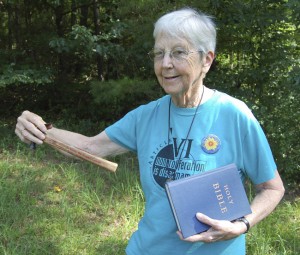 Sister Megan Rice, a member of the Sisters of the Holy Child, and two fellow protesters were convicted May 8 of interfering with national security when they broke into the primary storehouse for bomb-grade uranium in the U.S. in Oak Ridge, Tenn., in July 2012. Sister Rice is pictured in an undated photo. (CNS photo/Transform Now Plowshares handout via Reuters)

KNOXVILLE, Tenn. (CNS) — An 83-year-old woman religious and two other peace activists were found guilty May 8 in a federal court in Knoxville of “intending to harm national security” by breaking into the nuclear weapon-producing facility and defacing its walls last summer.

The group: Sister Megan Rice, a member of the Society of the Holy Child Jesus from Washington; Michael Walli, also from Washington, and Greg Boertje-Obed from Duluth, Minn., will be sentenced Sept. 23. They appeared in court May 9 asking to be released from prison while awaiting their sentence. A ruling on that appeal could be issued in mid-May.

After the July 28 break-in at the Y-12 National Security Complex in Oak Ridge, the facility shut down for two weeks.

The defendants, part of the group “Transform Now Plowshares,” intended for their actions to be symbolic, according to their attorney.

In July, they cut through security fences, hung banners, strung crime-scene tape and hammered off a small chunk inside the most secure part of complex. They also splattered blood on the walls.

According to The Associated Press, federal officials said there was never any danger the protesters would reach materials that could be detonated on site or used to assemble a dirty bomb, a position stressed by defense attorneys in the case.

Francis Lloyd, Sister Rice’s attorney also argued that “spraying of biblical graffiti” and other symbolic acts were not intended to damage uranium stored in the building.

Sister Rice, who has been arrested more than 40 times for acts of civil disobedience, said in court that she was surprised they made it all the way to the interior of the secured zone without being stopped and she also was surprised that plant operations were suspended after they broke in.

U.S. District Judge Amul Thapar dismissed the jury and then heard arguments about a motion by the defense to dismiss a sabotage count against the trio that carries a maximum prison sentence of 20 years. On May 9 the judge set July 29 as the deadline for legal filings on the motion.

Steven Erhart, the National Nuclear Security Administration manager at the weapons facility, said in the trial that the break-in harmed the site’s credibility and it also exposed security flaws that have since been repaired and improved.

Bill Quigley, the defense attorney, said evidence has not been produced to show the group had intended or succeeded to harm national security.

A Catholic Worker newsletter outlining the court case for its members May 8 noted that Boertje-Obed’s testimony tied together much of what had been said all day by calling attention to the story of the good Samaritan who stopped to help an injured man.

He likened that story to the actions of the three defendants who saw something wrong and stopped to do something to end it.

NEXT: Blogging Catholic moms share their faith as ‘digital disciples’