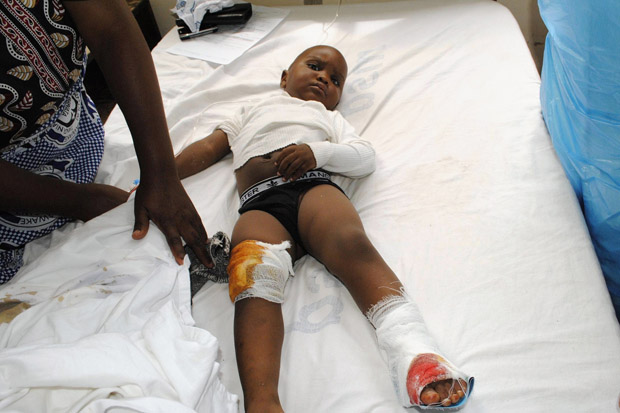 A boy receives treatment at Mount Meru Regional Hospital after he was injured in an explosion at St. Joseph Mfanyakazi Catholic Church in Arusha, Tanzania, May 5. (CNS photo/Reuters)

VATICAN CITY (CNS) — The deadly bombing of a new church in northern Tanzania left at least two people dead and a dozen injured while the Vatican nuncio escaped unharmed after the attack.

Archbishop Francisco Padilla, apostolic nuncio to Tanzania, was among those attending the inauguration of a new church in the city of Arusha May 5. 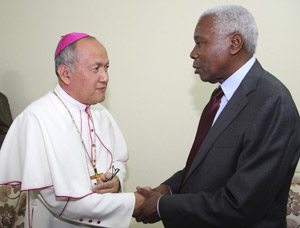 Eyewitnesses reported a bomb was thrown from a motorcycle into the church.

Tanzanian President Jakaya Kikwete called it “a terrorist act.” As of May 6, police had arrested eight people — four Saudis and four Tanzanians — in relation to the attack.

Archbishop Padilla told Vatican Radio May 6 that the pre-inauguration ceremony for the new church began with a blessing outside.

“Before going inside, I heard an explosion then I saw bodies of people injured on the ground,” he said.

“I was in shock and the police immediately took me someplace safe,” he said.

He said his prayers and thoughts were with all those hurt by the blast. “I feel very badly for them, innocent victims attending a celebration.”

The archbishop said an attack on a church was completely unexpected.

“Similar things have happened in Kenya, but not in Tanzania. It’s the first time a bomb exploded during a liturgical celebration.”

About 30 percent of mainland Tanzanians are Christian, 35 percent are Muslim and 35 percent profess traditional African beliefs.

On Tanzania’s predominantly Muslim island of Zanzibar, where some elements are fighting for secession, a priest and a Protestant pastor were killed in separate incidents in February and another priest was injured in a Christmas Day attack; a Muslim cleric also was attacked with acid last November. More than five churches on the island were set alight in arson attacks last year.

PREVIOUS: Only defense against devil, hatred is word of God, humility, pope says

NEXT: Cardinal says dialogue was missing from Vatican’s look at LCWR