Base communities and mega-Masses: Parish ministry in Brazil varies 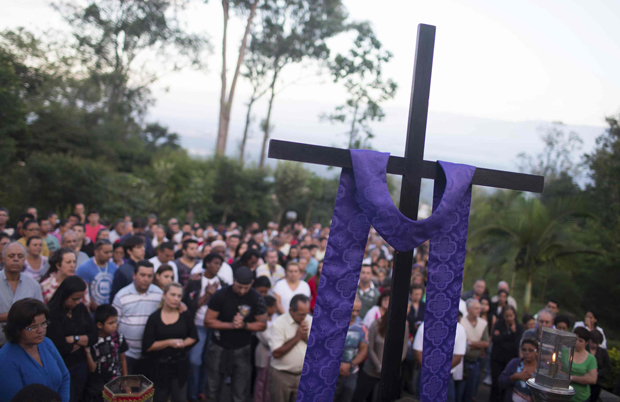 Worshippers participate in a procession to celebrate a Good Friday service outside the the Basilica of the National Shrine of Our Lady of Aparecida in Brazil March 29. (CNS photo/Roosevelt Cassio, Reuters)

SAO PAULO (CNS) — On a Saturday night in a small community on the outskirts of Sao Jose dos Campos, parishioners flock around the entrance of a church in the Parish of St. Lucia, waiting for Father Vitor Mendes to arrive. Father Mendes is one of the two priests who take care of parishioners in the parish’s five churches.

“The other father and I usually each conduct a Saturday night Mass and three Masses on Sunday,” he said.

Although it is a heavy schedule, Father Mendes was not complaining. He said there are other places in Brazil where priests have to scramble and travel hours and even days to tend to their flock.

Recent Brazilian church data reiterates the priest’s feelings, showing that although there has been an increase in the number of priests, they are not spread evenly throughout the country. As a result, ministry differs in different parts of the country, which is larger than the 48 contiguous U.S. states and varies geographically and socially.

“There are regions, such as the Southeast and South, where there are a lot of priests and other regions, like the North, where there is one priest to serve an enormous area,” Father Jose Carlos Pereira, who has analyzed some data, told Catholic News Service.

For instance, Father Geraldo Ferreira Bendahan of Our Lady of Grace Parish, just outside the city of Manaus in Brazil’s Amazon region, is in charge of 12 churches, with no other priest to help him. He often has to travel hours by boat or car on dirt roads to celebrate weddings, baptisms and Masses.

“Here in the north of Brazil, parishes have a much greater area than in other parts of Brazil, because parishioners are more spread out. The low demographics in many areas result in parishes that extend for many kilometers,” said Father Joao Sucarrats, chancellor of the Archdiocese of Manaus.

He said parishioners in remote locations only see a priest two to four times a year.

“The presence of laypeople within the church organization in these parishes is very strong,” said Father Sucarrats. “They conduct celebrations during the weeks the priest is unable to attend their church.”

The chancellor said attempts to bring in priests from other parts of the country are not always successful. 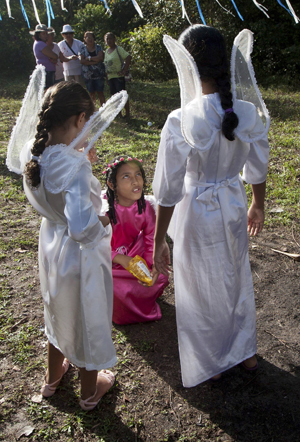 Young pilgrims dress as angels as they accompany the statue of Our Lady of Conception (not seen) during an annual river procession and pilgrimage along the Caraparu River in Santa Izabel do Para, Brazil, Dec. 8. (CNS photo/Paulo Santos, Reuters)

“Priests from other regions have to embrace different cultures found in this region and try to get their message across in many different ways. Sometimes this is difficult for some religious to understand,” he said.

Father Sucarrats said the more active participation of laypeople within the day-to-day workings of the parish causes tension between the new priest and his parishioners. He said it takes two-three years for priests to adapt to the Amazon’s way of life, and that many who come enthusiastically return home before their first year is up.

Tension between religious and laypeople is also felt in Brazil’s basic ecclesial communities, which combine scriptural reading with everyday issues.

Celia Aparecida Leme, one of the coordinators of base communities in the Sao Paulo Archdiocese, said these grass-roots groups are usually involved in issues such as housing, violence and health and, like other church groups that deal with social issues, sometimes face opposition from priests and bishops.

“In the center of all our discussions is the word of God. Our social activism is a consequence of the study and reflection of the Scriptures,” she emphasized.

“It is the people of these communities who, through group discussions, find solutions to specific problems and promote change in their neighborhoods,” she said.

Although the Brazil Census Bureau has shown a reduction of Catholics in Brazil, from 91.8 percent of the population in 1970 to 64 percent in 2010, in the latest survey, Catholics still represent the largest religious group in the country, approximately 123 million.

Father Pereira said people answering earlier censuses were “embarrassed to admit that, although they were Catholics, (they) also worshipped the Afro-American religions such as Candomble or went to Macumba rituals.”

Before such Afro-Brazilian religions became more accepted, people “told surveyors they were Catholic so as not to admit they practiced religions that, at the time, were marginalized by society.” Now, as those religions have become more accepted, said Father Pereira, the number of “Catholics” has declined. 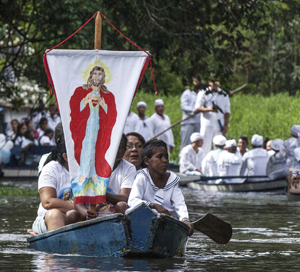 Pilgrims display a banner with an image of Christ as they travel in a boat in 2012 while accompanying the statue of Our Lady of Conception (not seen) along the Caraparu River in Santa Izabel do Para, Brazil, Dec. 8. (CNS photo/Paulo Santos, Reuters)

If, on the one hand, the data shows a quantitative decline of Catholics in Brazil, there has been a qualitative increase in those who have remained, said Cecilia Mariz, sociology professor at Rio de Janeiro State University. “Although the data shows that there was a real decline in those claiming to be Catholic, those who remained seem to be more practicing, more involved, more committed,” she said.

One of the reasons for this resurgence is the embracing of other, less traditional forms of liturgy, such as that of Father Marcelo Rossi, who sings, dances, appears in movies and fills soccer stadiums for his Masses. In northeastern Brazil, Father Glenio Guimaraes ministers inside churches and on his surfboard.

But not all agree that mega-events are a positive way to attract followers. Leme said one challenge for Brazil’s church is to create a model more focused on small community groups and their accomplishments and less focused on mega-people celebrations.

“It is in small local communities that one can promote change, not with thousands of people together,” she said.

Capuchin Brother Carlos Rockenbach, former executive secretary of the Department of Mission and Spirituality at the Latin American bishops’ council, or CELAM, and currently a parish priest in Marau, said recent changes in Brazil’s Catholic Church began after the Fifth General Conference of the Bishops of Latin America and the Caribbean in Aparecida, Brazil, in 2007. The document produced at the conference, dubbed the Aparecida document, summons bishops to a more missionary stance.

“The Brazilian church is now attracting some of those who had no religion as well as bringing back lapsed (nonpracticing) Catholics,” said the brother. He said the church is bringing back the teaching of Jesus Christ and a church more integrated with today’s world.