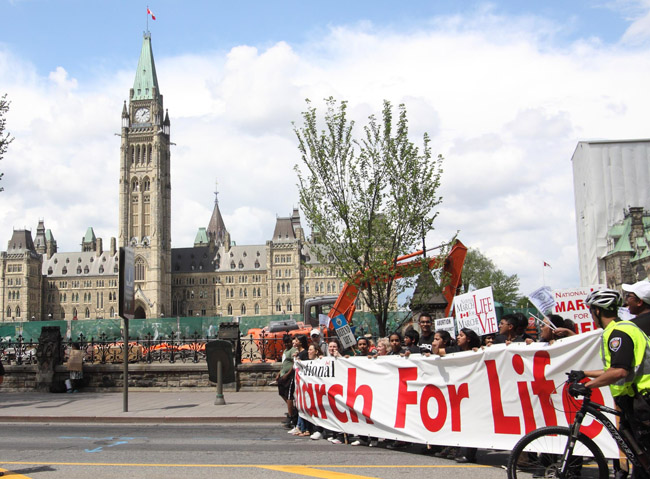 “Gendercide is the systematic elimination of girls just because they are girls,” Conservative member of Parliament Mark Warawa, who represents Langley, British Columbia, told the crowd on Parliament Hill May 9.

“There are 200 million missing girls in the world right now, which is creating a huge problem for society,” said Warawa, who introduced a motion earlier this year to condemn female gendercide. The political debate engendered by the motion gave rise to the march’s theme: “End Female Gendercide: ‘It’s a girl’ should not be a death sentence.”

Supreme Knight Carl Anderson of the Knights of Columbus told the crowd: “Only a culture of life can build a true culture of human rights. … Death can never be a solution, whether it’s abortion, euthanasia or assisted suicide.

“No problem is so grave it requires the death of our children,” he said, calling children Canada’s greatest natural resource.

“We want to care for life from conception to natural death,” said Quebec Archbishop Gerald Lacroix. “We come here today to tell the whole of Canada and our people here we have elected to serve the great people of Canada: We want life to be respected; we want life to be celebrated and we want to protect life every day of the year.”

Toronto Cardinal Thomas Collins also briefly addressed the crowd, encouraging them in their support for life at all stages. Bishop Noel Simard of Valleyfield, Quebec, spoke about the importance of life as a human rights issue and invited people to attend the May 18 march against euthanasia in Quebec City.

PREVIOUS: Don’t be a sourpuss, be joyful, Pope Francis says

NEXT: Spring cleaning at the Vatican reveals 1494 painting of native Americans