Diversity is a blessing when all are united in faith, pope says 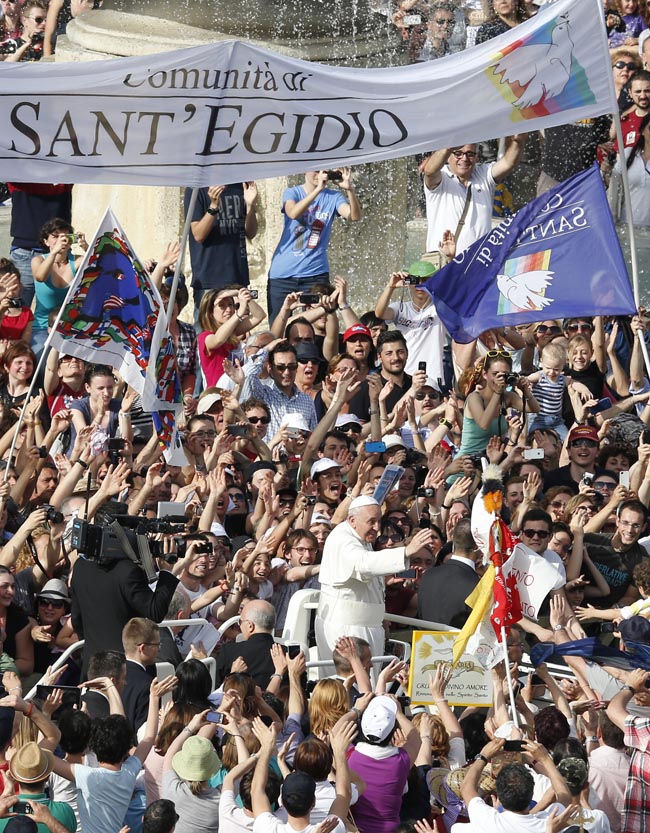 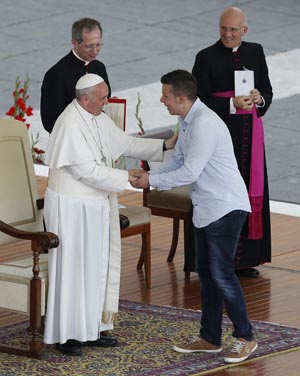 Pope Francis greets a young man during a Pentecost prayer vigil with members of Catholic lay movements in St. Peter’s Square at the Vatican May 18. An estimated 200,000 people from 150 movements attended the vigil. (CNS photo/Paul Haring)

VATICAN CITY (CNS) — Calling for unity — not uniformity — in the church, Pope Francis said diversity is a blessing only when all Catholics recognize and follow church teaching.

“It is the church which brings Christ to me and me to Christ; parallel journeys are dangerous,” he told some 200,000 members of Catholic lay movements and groups during a Pentecost Mass in St. Peter’s Square.

(See the full text of the pope’s homily.)

“When we venture beyond the church’s teaching and community, and do not remain in them, we are not one with the God of Jesus Christ,” he said during his homily at the Mass May 19, concluding a weekend dedicated to movements, including the charismatic renewal, Focolare movement, Neocatechumenal Way, Regnum Christi, Communion and Liberation and others.

“Only the Spirit can awaken diversity, plurality and multiplicity while at the same time building unity,” the pope said. “When we are the ones who try to create diversity and close ourselves up in what makes us different and unique, we bring division.”

On the other hand, he said, “when we are the ones who want to build unity in accordance with our human plans, we end up creating uniformity, standardization.”

The pope said the Holy Spirit can appear “to create disorder in the church” by bringing such different gifts to its members, but when everyone allows themselves to be guided by the Spirit, they learn to treasure variety rather than letting it become a source of conflict.

The Holy Spirit can make people uncomfortable, Pope Francis said. “Newness always makes us a bit fearful, because we feel more secure if we are the ones who build, program and plan our lives in accordance with our own ideas, our own comfort, our own preferences.” 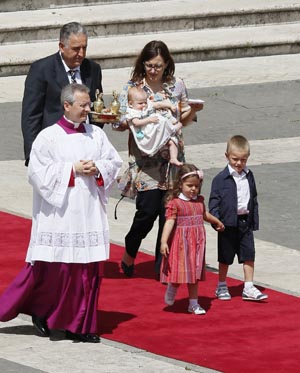 Fernando Barra and Sista Rossolino and their three children participate in the offertory as Pope Francis celebrates Mass on the feast of Pentecost in St. Peter’s Square at the Vatican May 19. (CNS photo/Paul Haring)

The spiritual journey is no different, he said. “We fear that God may force us to strike out on new paths and leave behind all our too narrow, closed and selfish horizons in order to become open to his own.”

Seeking the newness God’s offers through the Holy Spirit “is not a question of novelty for novelty’s sake, the search for something new to relieve our boredom, as is so often the case in our own day,” he said. “The newness which God brings into our life is something that actually brings fulfillment, that gives true joy, true serenity, because God loves us and desires only our good.” 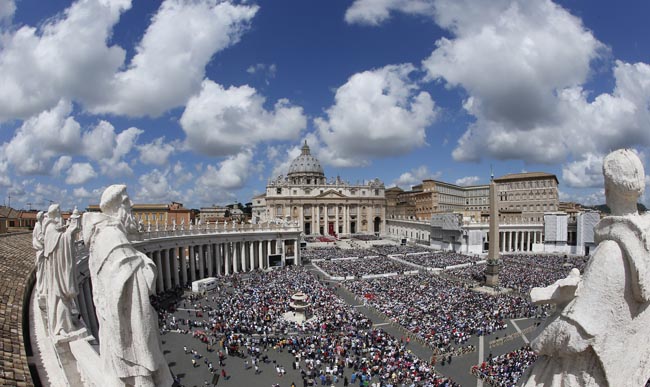 Pope Francis celebrates Mass on the feast of Pentecost in St. Peter’s Square at the Vatican May 19. (CNS photo/Paul Haring)