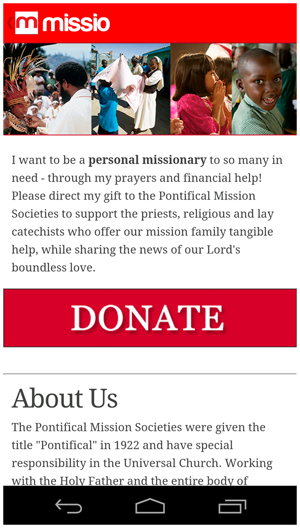 A screen from the new smartphone app Missio is seen on a Google Android in this image released by Little i Apps.

VATICAN CITY (CNS) — With slightly more of a swipe than a tap, Pope Francis helped the Pontifical Mission Societies of the United States broaden its reach around the world by unlocking a smartphone app.

At the end of an audience with national directors of pontifical mission societies from around the world May 17, Oblate Father Andrew Small, national director of the Pontifical Mission Societies in the United States, brought an iPad up to the pope for the launch.

Father Small — who brought two iPads and two mobile hotspots with him to the papal audience — had been called into the office of the pope’s secretary before the audience to explain precisely what he wanted the pope to do.

After the pope’s formal speech to the national directors and after personally greeting each one, it was Father Small’s turn.

“It was fantastic. Everything went according to plan,” the priest said.

He gave the pope one of the iPads and told him, “We want to put the missionary Gospel in the pockets of every young person around the world.” The pope responded, “Good.”

Then the pope asked, “With my finger? Here? Here?” and, Father Small said, the pope “used the index finger of his right hand — the one with the ring — very gingerly” to unlock the app.

The Missio app offers news and information in English, Spanish, Italian, German, French, Portuguese, Chinese and Arabic from Fides, the Vatican’s missionary news agency, and news.va. The news appears in the default language set on the mobile device. The app also includes videos from news.va and Catholic News Service.

“The app is a way for the church and our Holy Father to reach the growing number of the world’s people who have access to handheld mobile devices, a way to connect as the body of Christ,” Father Small said in a statement.

The app was available for download before the official launch, but remained locked. When the pope activated the app by pushing a button marked “evangelizantur,” Latin for “they have been evangelized,” users were notified.

The app is supported by Apple and Android devices. It can be downloaded for free wherever apps are available.

The introduction of the app comes as the Vatican has increasingly taken advantage of new communication technologies, including a papal Twitter account, @Pontifex. Father Small said social media helps the church call more people to be followers of Christ, “and if used properly the new media allow for a more intimate relationship between peoples and nations, fostering peace and mutual understanding.”

PREVIOUS: Archbishop says people returning to confession because of pope

NEXT: Recognize your sin, ask forgiveness, pope says at Mass