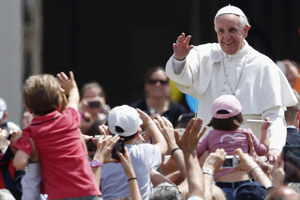 Pope Francis waves at the end of a Mass. (CNS photo/Stefano Rellandini, Reuters)

VATICAN CITY (CNS) — Pope Francis said the prefect of the Congregation for the Evangelization of Peoples, which cares for the church in mission territories, has been teaching him about the nuts and bolts reality of the universal Catholic Church.

“He is a professor and comes to me and says, ‘This diocese is here and is like this,'” the pope told national directors of the pontifical mission societies from around the world. Referring to Cardinal Fernando Filoni, Pope Francis said, “I learn the church from him — and without paying him.”

After those introductory remarks May 17, Pope Francis spoke to the national directors about the importance of their work in educating all church members — from children on up — about their Christian responsibility to participate in and support the missionary work of the church.

Describing the passage as being “so relevant that it could have been written yesterday,” Pope Francis quoted from Pope Paul VI’s 1975 apostolic exhortation on missionary work:

“May the world of our time, which is searching, sometimes with anguish, sometimes with hope, be enabled to receive the Good News not from evangelizers who are dejected, discouraged, impatient or anxious, but from ministers of the Gospel whose lives glow with fervor, who have first received the joy of Christ, and who are willing to risk their lives so that the kingdom may be proclaimed and the Church established in the midst of the world.”

Many people in the world still have not heard of Jesus and been given the help they need to come to know him, the pope said. “It is urgent to find new forms and new ways so that the grace of God may touch the hearts of every man and every woman and bring them to him.”

The missionary societies include the Holy Childhood Association, Missionary Union of Priests and Religious, Society for the Propagation of the Faith and the Society of St. Peter the Apostle. The groups promote missionary awareness and raise funds for the work of the church in mission territories.

Pope Francis said, “All of us experience our poverty, our weakness in bringing the world the precious treasure of the Gospel,” but each Christian has the obligation of trusting the Holy Spirit to give them the strength to share the faith.

“The most frequent temptation” parishes face, he said, is that of focus on internal challenges and problems, rather than on reaching out to others.

The pope said the missionary societies are important not only for raising up missionaries in the church, but for supporting the church in mission territories because those Catholic communities “often operate in a climate of difficulty, discrimination and even persecution.”