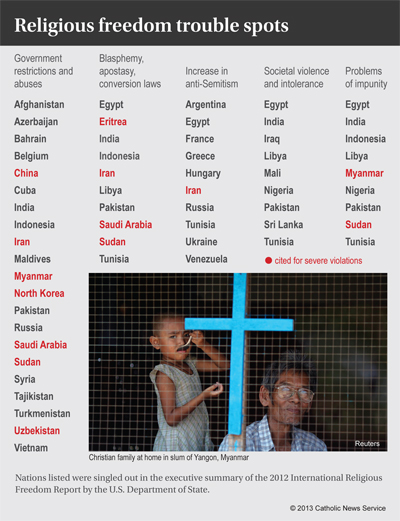 In its recent report on religious freedom worldwide, the U.S. State Department listed several countries under areas of particular concern. Myanmar, China, Eritrea, Iran, North Korea, Sudan, Uzbekistan and Saudi Arabia were singled out for severe problems regarding the freedom of religion and belief.

WASHINGTON (CNS) — The State Department’s International Religious Freedom Report released May 20 and a counterpart report by an independent commission issued a few weeks earlier see many of the same trouble spots around the world: North Korea, China, Pakistan, Sudan, Nigeria and Vietnam, among others.

Neither of the reports found much improvement in the countries they describe as most likely to restrict religious rights, whether through laws and policies or actions by extremists that go unanswered by authorities.

“The report chronicles discrimination and violence in countries ranging from established democracies to entrenched dictatorships,” said Secretary of State John Kerry in introducing his agency’s annual report at a press briefing. “It documents that governments around the globe continue to detain, imprison, torture, and even kill people for their religious beliefs. In too many places, governments are also failing to protect minorities from social discrimination and violence.

He focused on “troubling trends” of laws governing blasphemy and apostasy and of a rise in anti-Semitism. He announced that he was naming Ira Forman, former CEO of the National Jewish Democratic Council as special envoy to monitor and combat anti-Semitism. The position has existed since 2004, but it had been filled by an acting envoy since Hannah Rosenthal stepped down last year.

Kerry said laws against blasphemy and apostasy are increasingly used “to repress dissent, to harass political opponents, and to settle personal vendettas. Laws such as these violate fundamental freedoms of expression and religion, and we believe they ought to be repealed.”

The agency’s report — thousands of pages of online material — included updates in the status of the “countries of particular concern” where there are “systematic, ongoing, egregious violations of religious freedom, … such as: torture or cruel, inhuman, or degrading treatment or punishment; prolonged detention without charges; causing the disappearance of persons by the abduction or clandestine detention of those persons; or other flagrant denial of the right to life, liberty, or the security of persons.”

The eight such countries identified by the State Department in past years are Burma, China, Eritrea, Iran, North Korea, Saudi Arabia, Sudan and Uzbekistan.

Kerry added that by defending the rights of expression in other countries, “we are also ensuring that we can express our own views and practice our own faith without fearing for our own safety or our own lives.”

Also at the briefing, Suzan Johnson Cook, ambassador at large for international religious freedom, highlighted some of the key problems in a handful of countries:

“Thousands of people around the world are jailed because of what they believe or don’t believe,” she said. “In Iran, more than 116 Baha’is are in prison for teaching and expressing their faith, and many Christians, Sufis and Sunnis are facing similar treatment. Additionally, a Christian pastor named Saeed Abedini, who is an American and Iranian citizen, was sentenced to eight years in prison just for his beliefs. In Eritrea, people are detained on account of their religious beliefs. Some have reportedly died due to torture or lack of medical treatment.”

She added that “many governments fail to prosecute the perpetrators of crimes motivated by religious animosity, creating a climate of impunity that fueled further discrimination and violence.”

For example Cook said, Egypt “failed to appropriately investigate and prosecute perpetrators and often did not effectively intervene when sectarian violence arose. In Pakistan, religious minorities continue to encounter societal discrimination and violence, and authorities frequently fail to arrest the perpetrators.”

She said sectarian violence in Pakistan claims more lives each year, with more than 200 Shia Muslims killed in the first two months of 2013.

In Nigeria, members of the extremist sect Boko Haram have targeted Christians and Muslims, Cook said. “The government response has involved gross violations of human rights of a civilian population and deepened impunity.”

Cook said in response to questions about some of the “countries of particular concern” that have had markedly changed political situations, that despite changes in Burma religious rights remain a problem.

Burma has clearly had societal and economic reform, Cook said, but in 2012 “we didn’t see any improvement in religious freedom.”

The U.S. Commission on International Religious Freedom, an independent organization established to monitor how the federal government responds to abuses of religious freedom in other countries, issued its similarly comprehensive country-by-country report late in April.

It breaks its material into three categories, Tier 1, for countries it recommends be designated by the State Department as “countries of particular concern;” Tier 2, for countries that warrant watching because religious persecution or other restrictions on religious freedom are increasing; and Tier 3, countries and regions that were monitored by the commission

In a press release following the release of the State Department report, Katrina Lantos Swett, chair of the commission, lauded the agency’s work, but called for it to classify another seven nations as “countries of particular concern,” enabling the sanctions that designation would bring. The commission would extend the list to include: Egypt, Iraq, Nigeria, Pakistan, Tajikistan, Turkmenistan and Vietnam.

She also cautioned the State Department not to let the designations expire, as they are due to in August.

The State Department’s comprehensive analysis of religious freedom around the world compiles government laws and policies, analyzes trends and incorporates anecdotes from news reports and observations by government personnel in each country.

NEXT: Vatican financial investigator says laws, roles will be strengthened