Unemployment goes against God’s plan — ‘It is not right!’ Pope says 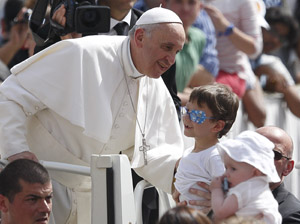 Pope Francis greets a boy as he arrives to lead his general audience in St. Peter’s Square at the Vatican May 1. (CNS photo/Paul Haring)

The problem of unemployment is “very often caused by a purely economic view of society, which seeks self-centered profit, outside the bounds of social justice,” he said, marking the May 1 feast of St. Joseph the Worker during his weekly general audience.

“I wish to extend an invitation to everyone to greater solidarity and to encourage those in public office to spare no effort to give new impetus to employment,” he said. “This means caring for the dignity of the person.”

The pope touched on the same theme during the homily at his early morning Mass, before a congregation of unwed teenage mothers and their children in the chapel of the Domus Sanctae Marthae, where he lives.

In his homily, the pope said unemployment “is a burden on our conscience” because when society is organized in such a way that it cannot offer people an opportunity to work, “there is something wrong with that society: It is not right!”

“It goes against God himself, who wanted our dignity to begin with (work).”

“Power, money, culture do not give us dignity,” he said. “Work, honest work, gives us dignity.”

“People are less important than the things that give profit to those who have political, social, economic power. What point have we come to?”

However, he said, “today many social, political and economic systems have chosen to exploit the human person” in the workplace, by “not paying a just (wage), not offering work, focusing solely on the balance sheets, the company’s balance sheets, only looking at how much I can profit. This goes against God!”

“People are less important than the things that give profit to those who have political, social, economic power. What point have we come to?” he asked.

The pope recalled a recent “tragedy” in Bangladesh, where more than 400 garment workers were killed when the building they were working in collapsed. The workers reportedly earned just $38 a month.

“This is what you call slave labor,” the pope said.

Today, “we can no longer say what St. Paul said, ‘Who will not work, should not eat,’ but we have to say, ‘He who does not work has lost his dignity’ because he cannot find any opportunities for work.”

A society that cannot offer a person the possibility of work is a society that “has stripped this person of dignity,” he said.

Later in the day, Pope Francis returned to the theme of work and dignity during his weekly general audience.

More than 70,000 people turned out in St. Peter’s Square, many of them Italian families and children enjoying the May 1 Worker’s Day public holiday in Italy and many other countries.

After a long tour around the square in the popemobile, the pope dedicated his catechesis to May 1 as both the celebration of St. Joseph the Worker and the beginning of the month devoted to Mary.

Work is part of God’s loving plan for humanity, who is called to participate in his act of creation, the pope said.

When, in the Book of Genesis, the Lord told Adam and Eve to “fill the earth and subdue it,” the pope said that “didn’t mean to exploit it, but cultivate it, safeguard it, take care of his work.”

“Work is part of God’s loving plan; we are called to cultivate and safeguard all of creation’s resources and this is how we participate in the act of creation,” he said.

Work gives people dignity by allowing them to participate in God’s creation, support themselves and their families and contribute to the growth of their nation, he said.

While he called for more solidarity toward the unemployed and greater efforts by government officials to reinvigorate employment opportunities, the pope also called on people, especially the young, not to give up hope.

“There is always light on the horizon,” he said.

The pope made a special appeal against slave labor and human trafficking.

“How many people worldwide are victims of this type of slavery, in which the person is at the service of his or her work,” he said. “Work should offer a service to people so they may have dignity.”

The pope also urged his listeners to remember the importance of prayer as the silent contemplation of Jesus and conversation with God.

The month of May, the pope said, recalls the beauty of praying the rosary, which helps people keep Jesus “at the center of our thoughts, our attention and our actions.”

“It would be wonderful if, especially this month of May, (the rosary) were recited together as a family, with friends, in parishes,” he said.

After greeting pilgrims from Poland, Pope Francis recalled the second anniversary of the May 1 beatification of Blessed Pope John Paul II. He asked the Polish seminarians and teachers present that their lives “be permeated by the faith, charity and apostolic courage of John Paul II.”

NEXT: Pope Francis welcomes retired Pope Benedict back to Vatican