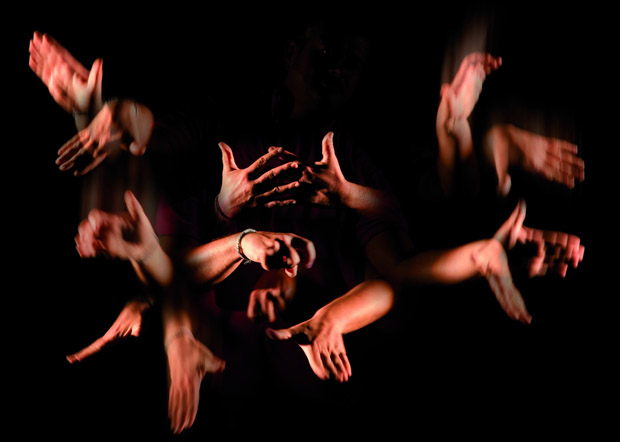 Studio Azzurro, an Italian multimedia art group, has created an interactive video installation, "In the Beginning (and Then),"' for the Vatican pavilion at the Venice Biennale international exhibition of contemporary art June 1-Nov. 24. The photo is a detail from a projection that will be featured on a side wall. (CNS photo/courtesy of Studio Azzurro)

VATICAN CITY (CNS) — After years of discussion and at least one failed attempt, the Vatican will open a pavilion at the 2013 Venice Bienniale, a major international contemporary art exhibition.

Cardinal Gianfranco Ravasi, president of the Pontifical Council for Culture, told reporters May 14 the pavilion — paid for by sponsors — represents part of the Vatican’s attempt to initiate a dialogue with modern artists and reflect together on themes that are simultaneously religious and human.

The exhibition runs June 1-Nov. 24. The Vatican will have one of 88 national pavilions and, Cardinal Ravasi said, was assigned a space next to the Argentine pavilion even before Argentine Pope Francis was elected in March.

“In the pavilion we will not present art destined for the liturgy and sacred spaces — this is not our task,” the cardinal said. “We want to rebuild relations between art and faith, a relationship that went through a divorce, although not all contact was severed.”

For decades, he said, “art went its way, looking back at religion once in a while, though often critically or even blasphemously.”

The Vatican chose to begin its new relationship with artists by looking at the beginnings of faith and of the universe as recounted in the first 11 chapters of the Book of Genesis, he said, proposing the themes of creation, destruction and rebirth. “We didn’t want to go to artists and say, ‘Make us three crosses in three different styles’ or ‘three Virgin Marys,'” he said, but “to offer them a fundamental text and begin a dialogue.” 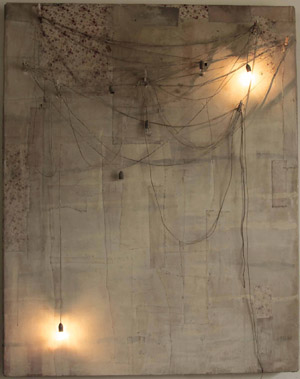 Lawrence Carrolls work “Nothing Gold Can Stay,” a piece made with oil, wax, canvas, wire and light bulbs, will be on display in the Vatican pavilion at the Venice Biennale international exhibition of contemporary art June 1-Nov. 24. (CNS photo/courtesy of Lawrence Carroll Studio)

After discussing the project with a dozen artists, three were commissioned to create works in different media for the Vatican space. Studio Azzuro, an Italian multimedia group, will create an interactive video installation on the theme “creation.” Czech photographer Josef Koudelka will exhibit 18 photographs on the theme “de-creation” or destruction, and the painter Lawrence Carroll, who often re-uses materials to suspend on his canvases, will present works on the theme of “re-creation” or “another life.”

“It was a privilege to be asked to show at the Vatican’s first pavilion, to show at the Venice Biennale,” said Carroll, who was born in Australia and raised in the United States. Carroll said he’s still completing the sculpture and five paintings — including a frozen one that melts and freezes again — he hopes to show in Venice.

Cardinal Ravasi said the works are not overtly religious, but can be “‘catechetical,’ in quotation marks,” because, particularly in reference to the Book of Genesis, they should raise questions in people’s minds about their origins and the origins of the world, about sin and destruction, about suffering, but also about hope for a new creation and new way of living.

At the entrance to the exhibit the Vatican will display three paintings by Tano Festa, an Italian painter and expert on Michelangelo. The works by Festa, who died in 1988, pay homage to Michelangelo’s Sistine Chapel ceiling frescoes of the creation of Adam and the expulsion of Adam and Eve from the Garden of Eden.

Antonio Paolucci, the director of the Vatican Museums and curator of the Vatican’s Venice exhibit, said the idea was to provide a bridge back to the great art commissioned by and created for the church, but art that communicates with people of every era and from any background.

The Vatican said the cost of its exhibit — 750,000 euros or about $985,000 — includes about $380,000 paid to the artists, as well as the cost of renting the space and setting up the works. The Pontifical Council for Culture found corporate sponsors to cover all the costs, said Msgr. Pasquale Iacobone, an official at the council.

NEXT: Pope asks people to pray to Holy Spirit every day