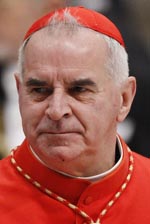 VATICAN CITY (CNS) — Scottish Cardinal Keith O’Brien, who resigned as archbishop after admitting to sexual misconduct, will leave Scotland “for several months for the purpose of spiritual renewal, prayer and penance,” the Vatican said.

Any decision about when the period will end or where the cardinal will live permanently will be made in agreement with the Vatican, said a statement released May 15 by the Vatican press office.

The statement did not specifically mention Cardinal O’Brien’s sexual misconduct. Instead, it referred to “the same reasons he decided not to participate in the last conclave.”

Retired Pope Benedict XVI accepted Cardinal O’Brien’s resignation Feb. 25 after the Observer, a British weekly national newspaper, carried a story detailing complaints of three priests and one former priest who alleged Cardinal O’Brien had made homosexual advances toward them.

The cardinal initially denied the allegations but said he would not be in Rome for the conclave to elect a successor to Pope Benedict because he did not want media attention to be on him rather than on the process to elect a new pope.

Less than a week later, however, he issued a public apology for his actions. He said he initially denied the allegations because they were made anonymously. But, in the March 3 statement, he said, “I wish to take this opportunity to admit that there have been times that my sexual conduct has fallen below the standards expected of me as a priest, archbishop and cardinal.”

The cardinal, who is now 75, said he would “spend the rest of my life in retirement. I will play no further part in the public life of the Catholic Church in Scotland.”

In early May, Cardinal O’Brien was photographed moving his belongings into a church-owned residence in Dunbar, on the North Sea coast about 30 miles from Edinburgh, where he had served as archbishop since 1985.

NEXT: Pope calls for global, ethical finance reform, end to ‘cult of money’