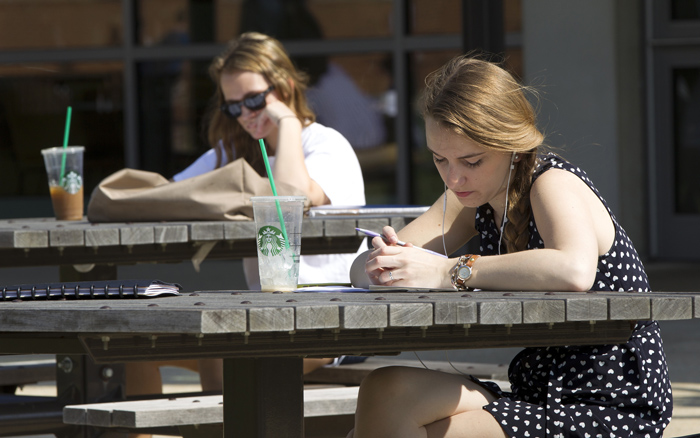 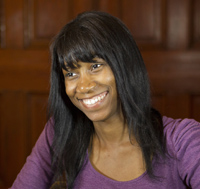 Natasha McKenzie of Queens, N.Y., a senior at Trinity Washington University, said higher interest rates on student loans would make it more difficult for her to continue her education. McKenzie is pictured at the university in Washington June 6. (CNS photo/Chaz Muth)

WASHINGTON (CNS) — Patricia McGuire, the president of Trinity Washington University, located less than four miles from the U.S. Capitol, has a strong opinion about the possibility that interest rates for student loans will increase.

“Nobody wants student loan interest rates to double; that just hurts students and for a number of low-income students it may mean they may choose not to come to college at all,” said McGuire, who has testified before Congress on this issue.

A year ago, Congress examined federally subsidized student loans for low- and middle-income students and passed a one-year extension on their 3.4 percent interest rate. If lawmakers fail to come up with another plan by July 1, that rate is set to double to 6.8 percent.

While McGuire was talking to Catholic News Service June 6, the Senate failed to take up two separate bills that would have kept the rate from doubling.

When she heard this news, McGuire tweeted the Senate action and later added: “Shame on the Senate.” Democratic and Republican Senators told reporters June 6 they will continue discussions to see whether some kind of deal can be reached before the July 1 deadline.

Michael Beseda, vice provost for enrollment at St. Mary’s College of California in Moraga, Calif., told CNS June 7 said Congress has “to resolve this; there are middle-ground positions.”

Beseda, who has worked in college admissions for 34 years, has a long view about loans and financial aid. He hopes Congress will keep the interest rate at 3.4 percent for a few more years while it works out a long-term solution. He also would like to see Congress cap the interest for these loans at a reasonable rate.

“It’s unconscionable that they can’t agree” on a solution, he said.

Senate Democrats proposed a two-year extension of the current rate while they worked on a complete overhaul of the federal student-loan program. Senate Republicans wanted to link the loan interest rates to financial markets.

In late May, the House approved a Republican proposal to allow interest rates on federal student loans to rise or fall from year to year with the government’s cost of borrowing, ending a system where rates are fixed by law. President Barack Obama threatened to veto the House Republicans’ legislation.

The thought of fluctuating student loan payments does not sit well with Natasha McKenzie, a rising senior at Trinity who is majoring in political science.

McKenzie, from Queens, N.Y., said her student loans will be about $20,000 when she graduates, which is less than the national average of $24,000. If that amount were to increase even slightly, she said, it could be a financial burden. But raising the interest rate by more than 1 percent, she said, might “make students not want to go (to college) in the first place.”

Federal student loans have been a backbone of support for her, she said, because when she was applying for college, “I knew my parents didn’t make enough money to send me to school each year and student loans granted me that opportunity.”

For other students, such loans are more than just extra support — they’re essential. “Without them a lot of people would not attend college,” she added.

She said Trinity’s enrollment services department talks its students “through loans and what happens when you graduate and have to pay” them off.

Beseda said St. Mary’s financial aid officers are similarly transparent in giving students and parents accurate college costs even in the pre-application stages, so they know what they are getting into. He said student average loan debt at St. Mary’s is $24,000.

On occasion, he said, St. Mary’s financial advisers will find students taking on more substantial loans, but advisers try to counsel them against it.

McGuire said the “big scare stories” of college graduates straddled with more than $100,000 in student loans represent students who took out private loans and may have been poorly advised.

She said colleges need to do their part in helping students afford higher education by being “completely transparent” about their costs, making every effort to keep tuition down and providing more grants for students who might need extra support to stay in school.

Michael Galligan-Stierle, president of the Association of Catholic Colleges and Universities, said in a June 7 statement that he hopes Congress can continue “to offer student loans at current rates” and he also noted that “Catholic colleges and universities are committed to affordable access.”

McGuire said leaders in Catholic higher education need to put renewed focus on how to support students who need help affording a college education and should view it as “an integral part of our responsibility in Catholic social teaching.”

“This is a matter of justice,” she said. “There are millions of American students who do not have access to quality higher education.”

Editor’s Note: A CNS video interview with the president of Trinity Washington University debate over congressional plan to raise interest rate federal student loans can be found at http://youtu.be/8pWtCGI35II.

PREVIOUS: Aim of new Chicago fundraising campaign to teach all ‘who Christ is’