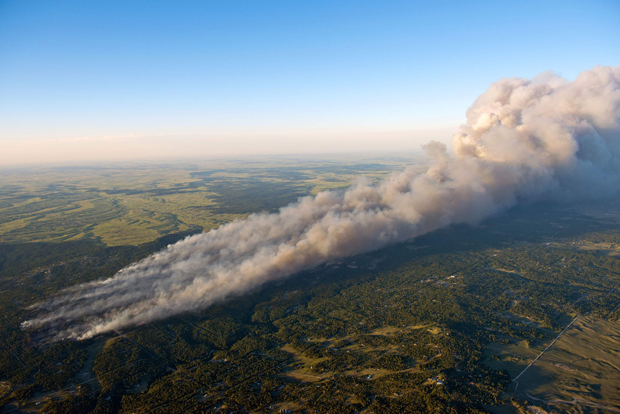 COLORADO SPRINGS, Colo. (CNS) — For the second year in a row, a wildfire got out of hand on a hot and windy afternoon in Colorado Springs June 12, leaving thousands of people fleeing for safety and thousands of others reliving a nightmare.

The Black Forest Fire, as it is being called, started in a forested area in the far northeast corner of El Paso County, just outside the Colorado Springs city limits, that goes under the name Black Forest.

As of June 13, it was estimated that more than 360 homes have been destroyed in the blaze — surpassing the state record-setting Waldo Canyon wildfire last June — and the fire had consumed nearly 15,000 acres. No injuries have been reported, and it is not known yet how the fire started.

The sisters of Benet Hill Monastery, located in the heart of the Black Forest area, made preparations June 11 and voluntarily evacuated June 12.

“We’ve got everybody ready in case the fire changes direction,” Benedictine Sister Jan Ginzkey said in an interview before they left. “We did take nine sisters who are in more fragile health to Mount St. Francis (where the Sisters of St. Francis of Perpetual Adoration run a nursing home),” Sister Jan told The Colorado Catholic Herald, the newspaper of the Colorado Springs Diocese. “Sister Nadine (Heimann, provincial) called and offered us sanctuary.”

Meanwhile, a group of parish social outreach ministers and Stephen ministers set up camp at St. Gabriel the Archangel Parish in the northeast part of the city to serve those whose homes had burned or were forced to evacuate.

“I started getting calls last night from parishioners whose homes were destroyed,” said Deacon Ed DeMattee, head of the ministry team. Most were members of Our Lady of the Pines Parish in Black Forest, he said.

Our Lady of the Pines Church in Black Forest was near the mandatory evacuation zone. The church has no power and was closed, with no daily Mass to be offered until further notice.

Dan Spadaro, a member of Corpus Christi Parish in Colorado Springs and columnist for The Colorado Catholic Herald, received a visit at his ranch from police just before 9 p.m. June 11 that he and his family, including his pregnant wife and five children, would have to leave their five-acre property in Black Forest.

With the help of friends, Spadaro was able to relocate his 10 goats that night to the designated animal safe haven at the Elbert County Fairgrounds.

Doug and Jennifer Brummel, directors of marriage and family life ministry at Our Lady of the Pines, and their seven children were forced to evacuate from their Black Forest home and were staying at the parish house of St. Patrick Church in Colorado Springs, where they act as consultants.

As of the morning of June 12, their home was still intact, but they were anxiously awaiting news of any developments, Doug Brummel said.

“People have just been remarkable with their help and support,” he said, but he added that, due to the number of parishioners affected by the fire, “it’s going to be a long road ahead.”

Fran and Larry Rutherford, who were out of town when the fire hit, received news on June 12 that their Black Forest home had been destroyed. The Rutherfords, who had lived in the home for decades, were unable to retrieve any family heirlooms, photo or memorabilia, said their son Ian, who also has a home in the area that is in the evacuation zone.

Howard is editor-in-chief and Ambuul is assistant editor of The Colorado Catholic Herald, newspaper of the Diocese of Colorado Springs, Colo.

PREVIOUS: Judge dismisses Serra suit; aim is for both parties to settle dispute