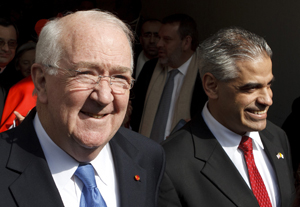 Obama’s announcement about Hackett came late in the day, along with his nominees for ambassador posts in Brazil, Spain, Germany, Denmark and Ethiopia.

“It gives me great confidence that such dedicated and capable individuals have agreed to join this administration to serve the American people. I look forward to working with them in the months and years to come,” the president said.

Hackett retired in December 2011 after 18 years as president of CRS, the U.S. bishops’ overseas relief and development agency.

If confirmed as U.S. ambassador to the Vatican, he would succeed Miguel Diaz, who left the post in late 2012. Diaz now is a professor of faith and culture at the University of Dayton, Ohio. As of June 18, the U.S. Senate Foreign Relations Committee had not yet scheduled a confirmation hearing on Hackett’s nomination.

Hackett was appointed president of CRS in 1993. During his tenure, he established a division focusing on outreach to dioceses, parishes, Catholic organizations, and colleges and universities, and laypeople were first appointed to the CRS board of directors.

Catholic Relief Services now operates in more than 100 countries, with a global staff of nearly 5,000.

“Ken’s dedication to the poorest and most vulnerable on behalf of the church, and through programs often sponsored by the U.S. government, reflects his ability to engage both sectors in serving those in need in highly complicated environments,” said Carolyn Y. Woo, CRS’ current president and CEO, said in a statement June 17.

Strengthening ties with the Catholic Church, both in the United States and at the Vatican, was one of the themes of Hackett’s tenure at the helm of CRS. “Under his leadership, the agency renewed its spiritual core even as it grew into one of the largest nongovernmental aid agencies in the United States with a budget that exceeded $800 million,” the agency said in a press release.

Diaz said Hackett “brings a wealth of experience and perspective on issues related to global health and humanitarian assistance, as well as service to the poor, an important focus for Pope Francis. I wish him much success as he builds bridges between the United States and the Holy See.”

Born in West Roxbury, Mass., Hackett joined the Peace Corps shortly after his 1968 graduation from Boston College. Assigned to a Catholic mission in rural Ghana, he worked in an agricultural cooperative and saw “the actual impact of American food aid on the health and well-being of very poor kids in a very isolated part of a West African country,” he said recently.

After completing his Peace Corps assignment, Hackett joined CRS, the U.S. Catholic relief and development agency, in 1972. He started his career in Sierra Leone, where he managed a nationwide leprosy program and a maternal and child health program.

Subsequent positions took him to various posts in Africa and Asia, as well as in CRS’ Baltimore headquarters. As regional director for Africa, he managed the agency’s response to the Ethiopian famine of 1984-85. He also supervised CRS operations in East Africa during the crisis in Somalia in the 1990s.

In February 2012, Hackett and Diaz represented the U.S. government at the consistory led by Pope Benedict XVI in St. Peter’s Basilica at the Vatican ceremony. Pope Benedict XVI created 22 new cardinals from 13 countries — including two from the United States and one from Canada.

In May of that year, he received the University of Notre Dame’s Laetare Medal during commencement ceremonies. The medal has been given annually since 1883 to a Catholic “whose genius has ennobled the arts and sciences, illustrated the ideals of the church and enriched the heritage of humanity.”

In announcing that honor, Holy Cross Father John I. Jenkins, Notre Dame’s university president, said in a statement: “Ken Hackett has responded to a Gospel imperative with his entire career. His direction of the Catholic Church’s outreach to the hungry, thirsty, naked, sick and unsheltered of the world has blended administrative acumen with genuine compassion in a unique and exemplary way.”

Hackett is a former North American president of Caritas Internationalis, the confederation of humanitarian agencies of the Catholic Church and a former member of the board of the Pontifical Council Cor Unum at the Vatican. He also has been an adviser to the U.S. Conference of Catholic Bishops.

Hackett was on the board of the Millennium Challenge Corporation, the congressionally mandated independent development agency, from 2004 to 2010. He has received numerous honorary degrees.

After retiring from CRS, Hackett was named a consultant to the University of Notre Dame’s Institute for Global Development.

NEXT: Hungry, stunted children a top priority for anti-poverty advocates