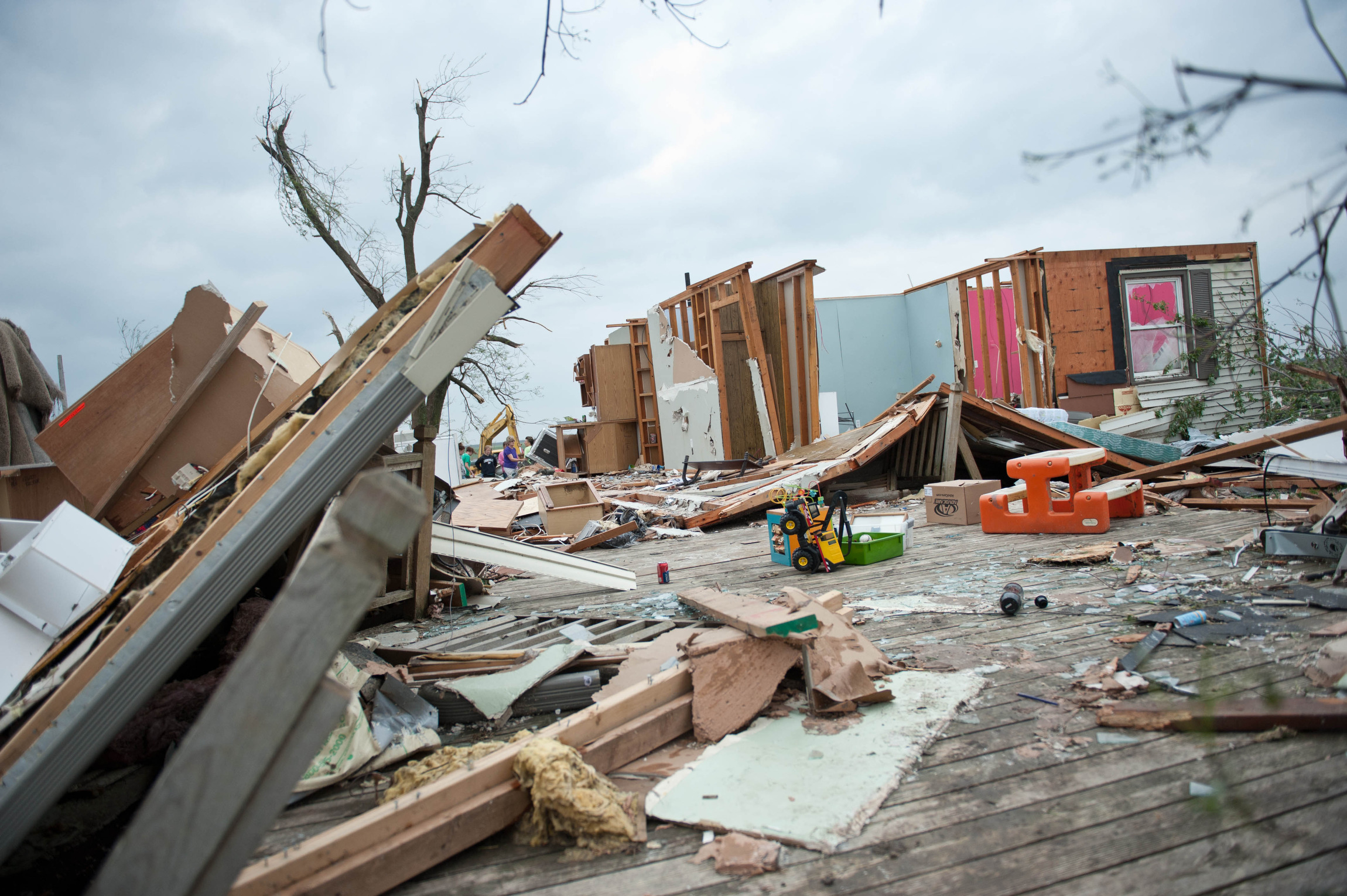 Huddled in a shower stall in their basement near Corning the afternoon of May 28 with a comforter over their heads, they prayed the rosary.

When the first weather alerts for the community in northern Kansas sounded, the threat was far enough away that Monica Becker took pictures of the first rope she saw coming down from the clouds.

She sent an image to WIBW-TV in Topeka, not yet even imagining that her family’s home stood in the direct path of a forming tornado.

It was the second day in a row severe weather struck northern Kansas communities.

On May 27, an EF2 tornado decimated two businesses and damaged many properties near Marysville. Then the storms that struck near Corning on May 28, producing EF3 and EF1 tornadoes, affected five families — all parishioners of St. Patrick Parish.

Father John Reynolds, their pastor, visited the families and found that each had a different story to tell.

Even with a background in meteorology and seeing images of tornado damage on TV, he had to see it with his own eyes to fully grasp the power the storms unleashed.

“The first thing people said was, ‘Everybody survived,'” Father Reynolds said. “Which — when you see this — is really kind of amazing.”

Also amazing, but not at all surprising to him, was the way the community came together.

Though they lost property, they were saying prayers of thanksgiving, he told The Leaven, newspaper of the Archdiocese of Kansas City.

When the warnings went out for Centralia and Corning, Monica called her husband, Royce, a farmer. He headed in from his shop.

They sent their five children to the basement, making sure everybody had shoes.

When a tornado came too close for comfort, Monica abandoned the photography and joined her family downstairs, where they waited for at least 45 minutes.

The noise grew so intense, she thought the worst had to have passed and called a friend. Only then did she learn that the big, slow-moving tornado had not yet even arrived.

When it hit, the tornado lingered overhead for what felt like two or three minutes.

As their home splintered apart above their heads and grain bins hurtled through the air, the family prayed that the basement ceiling and kitchen floor above them would hold. When the storm passed and they came out from under the blanket, they could see daylight reflecting in the screen of the basement TV.

And they knew the walls were gone.

But none of that mattered, said Monica, and quickly reassured her children. “It’s things. It’s material. It’s replaceable,” she said. “We just hugged. We knew we were going to be fine.”

“We’re all right,” said Royce. “We’re in good shape. It could be worse. There’s a lot of good people here helping.”

Neighbors from Corning and surrounding communities gathered at the hardest-hit homes before the threat of severe weather even faded.

At the Becker house, volunteers cleared out what they could salvage before impending rain caused further destruction.

On the other side of Corning, a tornado touched down the same evening, bearing down on the home of the McNally family.

Robert and Trish McNally had taken their five children kids to Gulf Shores, Ala., for a family vacation. They had time to relax for only a few hours when they started hearing of the storms back home.

The tornado stripped the brick off one side of their house and lifted the roof.

“I had so many people from the community up on that roof putting a temporary roof on,” said Trish, who received updates via cellphone. “They had to leave my house and take cover again because there was a warning going through.”

It wasn’t just their helping hands that friends and neighbors offered the families hit. They opened their homes, hearts and wallets as well.

Marsha Grossnickle, president of the Altar Society at St. Patrick, said people weren’t asked to help — they just did.

The Altar Society and city of Corning joined forces to provide a one-stop drop-off for donations at the community center. Volunteers there prepared hundreds of meals to deliver to the work sites, and the community gathered inside for hot meals at the end of the day.

It’s been heartwarming — but difficult — for the families to be on the receiving end.

Earlier on the day of the tornado, Monica Becker had been collecting clothes for a friend who lives in Moore, Okla., a community devastated by a deadly tornado earlier in May. Now she had to keep contributed clothing for her own family. It was hard, she said; they were meant for others.

“It’s very emotional,” said Monica, but added, “If God brings you to it, God will bring you through it.”

As soon as he heard about the tornadoes, Father Reynolds began praying.

As pastor of St. Patrick in Corning, St. Bede Church in Kelly and St. Vincent de Paul Parish in Onaga, he was home in Onaga when the storms hit. He waited until he knew it was safe to start calling to check on his parishioners.

He drove to Corning the next morning and helped with the cleanup, wanting to be with his people.

“You’re witnessing what people do here in the country,” he said. “They just kind of chip in and get it done.”

Grossnickle sees God at work in the response.

“It’s amazing that, in these terrible, difficult times, people are giving in loving ways — and are happy to give it,” she said. “They’re selfless at that time, and that’s got to be what God’s like.”

Langdon is on the staff of The Leaven, newspaper of the Archdiocese of Kansas City, Kan.

NEXT: Aim of new Chicago fundraising campaign to teach all ‘who Christ is’